Rutgers' Gary Nova Q&A: 'We are expecting the crowd to be electric' 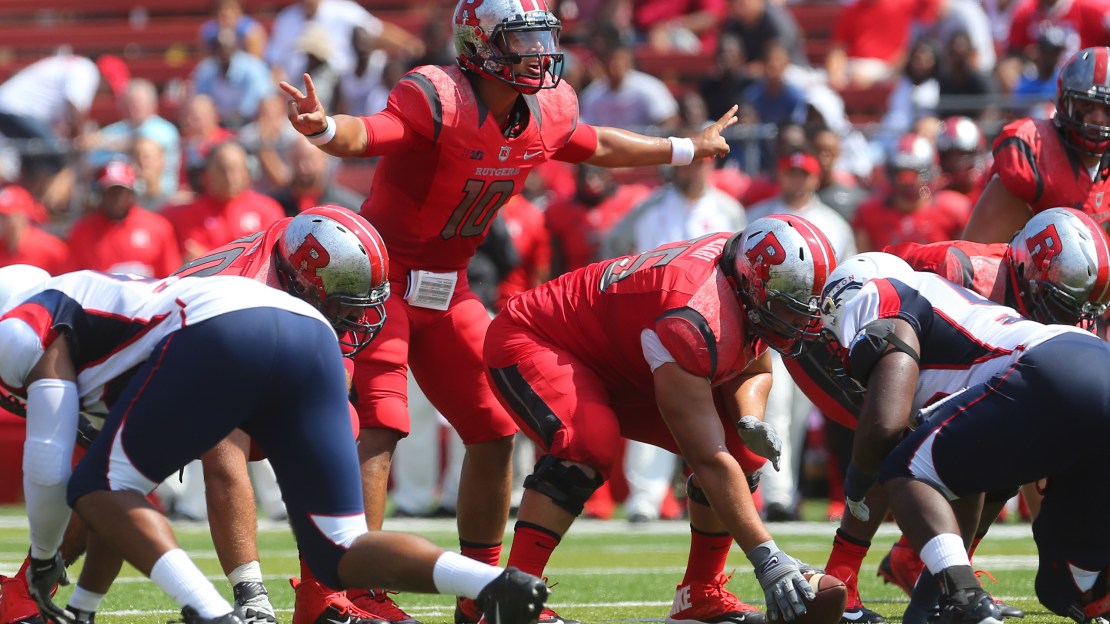 Looking for an early-season surprise? Look no further than Rutgers, which is off to a 2-0 start with a huge game vs. Penn State this Saturday. A big reason for the Scarlet Knights? early momentum is quarterback Gary Nova.

The senior has endured an up-and-down career. In fact, he lost his job in the latter half of 2013 due to ineffectiveness. Playing with consistency has been an issue for Nova throughout his career, as he had 51 touchdown throws and 39 picks entering 2014. But Nova seems to be turning a corner in his final season at Rutgers.

Nova?s play under new coordinator Ralph Friedgen has been a big key to Rutgers? start. He is No. 1 in the Big Ten in passing efficiency, completing 67 percent of his attempts for 563 yards with six touchdowns and an interception.

I caught up with Nova as he prepped for one of the biggest games of his career with Penn State coming to Rutgers for a prime-time game this Saturday night.

Q: How big is this Penn State game?
A: Just walking around campus, you can feel the buzz. A lot of people are talking about the game, wearing Rutgers football T-shirts and things like that. We are expecting the crowd to be electric. It?s everything you dream about as a kid and I am really looking forward to playing in that atmosphere.

Q: What would it mean to beat Penn State?
A: It would mean a lot, more than we would even know right now. We have to block that out, go out and play a great game and focus on getting the win. We can?t really think of the other stuff.

Q: How would you assess your play thus far after guiding your team to wins vs. Washington State in Seattle and at home vs. Howard?
A: I think I have been doing a good job leading the team, getting us in the right play. I think I?m completing the ball better. I am happy with my completion percentage. I have just one turnover, which is good.

Q: What type of impact has new offensive coordinator Ralph Friedgen had on you?
A: It has been a huge impact. He has taught me so much about the game. The first month and half, we just focused on defenses. He has been teaching me about defenses. It?s something I never really took the time to learn about before. He has shown me so much. It has been like a puzzle with everything coming together now.

Q: How much film do you watch?
A: I don?t think the amount of time is different. I think the understanding of what I?m looking at is different. The things that he has taught me about defense I am able to piece together, like pressures and things like that. It?s helping me out.

Q: Do you spend much time in Coach Friedgen?s office talking football?
A: He does a great job in our meetings making sure we are on the same page, not leaving any stone unturned. If I have any questions, I can always come to him. But we do so much and cover so much in meetings that I don?t really need to see him extra time.

Q: Are you doing any different drills?
A: Yes. We are doing an accuracy drill that?s helping. We take rapid-fire snaps and you have to put the ball on a target really quickly. That is helping improve my accuracy and footwork. Another player has his hand high, low, inside, outside, and we have to hit it. The coaches keep count and it gets pretty competitive.

Q: How big was it for you to lead the team on that game-winning drive vs. Washington State in the season opener?
A: When we got that turnover, we knew we needed to score. We had to execute and go down the field. We were on the same page and the guys up front did a good job. P.J. (Paul James) had a great run for the go-ahead touchdown.

Q: Any surprises on your offense?
A: (Receiver) John Tsimis is someone I have been big on for a while. He has been working really hard. With a guy like Leonte (Carroo) getting the attention, he just comes to work each day. For him to have a touchdown in each of our games, I?m really happy for him and expecting more.

Q: How has the offensive line been playing?
A: They have been doing a great job. Betim Bujari and Kaleb Johnson have been with me since Day One when I started. And to see a guy like Chris Muller grow from what he was last year to now has been great. And J.J. Denman also has been coming on. I think we are getting better as a group. We are all on the same page. It?s awesome.