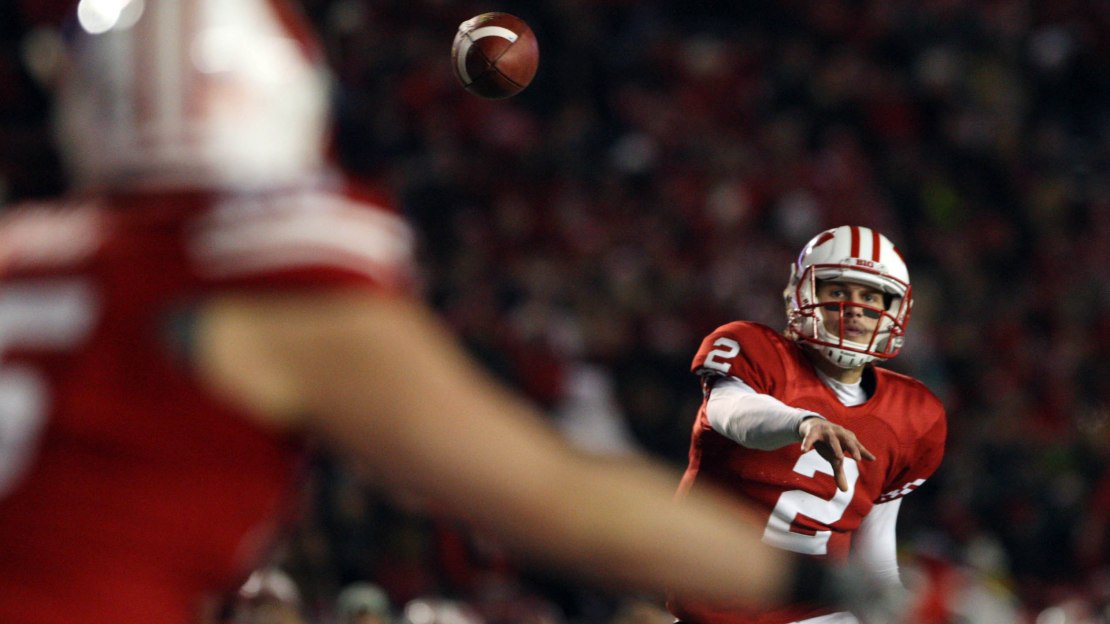 The mystery of the demise of Wisconsin QB Joel Stave is fascinating. Reminds me of old big-league pitcher Steve Blass. It appears Stave, a two-year starter, has just lost it. No real explanation for it, either. Bizarre. Jesse Temple of FOX Sports Wisconsin has a very detailed look at Stave?s situation.

Buzz about the Penn State sanctions being lifted persists. It?s a big deal, people. But David Jones of Pennlive.com isn?t overjoyed. In fact, he thinks the NCAA never should have had its nose in the Sandusky scandal to begin with. He makes some good points. Was this situation really under NCAA jurisdiction?

The Big Ten is still smoldering after that rough Saturday. Andrew Logue of the Des Moines Register takes the time to reassess each team.

Maybe part of the Big Ten?s problem is a lack of star power. That?s what Lee Barfknecht of Omaha.com thinks may be the issue. And, he has a point. How many true stars are in this league?

Barfknecht notes that the league is several quarts low on first-team All-Americans and first-round NFL draft choices. The biggest talent gap is at quarterback. The Big Ten hasn?t had a quarterback drafted in the first round since Kerry Collins from Penn State in 1995. This fact still amazes me. I think Christian Hackenberg and Wes Lunt will end that streak.

That offseason honeymoon for Nebraska? It?s over. That?s what a narrow win over FCS McNeese State will do.

Dirk Chatelain of Omaha.com says the positive part of Saturday?s events at Memorial Stadium is it jolts fans (and players) back to where they were after the Iowa loss last season, when everybody understood this program had both strengths. Sometimes, the picture in Lincoln can be painted a little bit too rosy.

Michigan State is off this week following its defeat at Oregon. The to-do list for the Spartans? Here are five things to keep an eye on.

Chief among the issues that need to be cleaned up, according to Mike Griffith of Mlive.com: the rushing attack and secondary. The Spartans' offensive line lacks the depth it had last season, and against the Ducks it was not effective in the second half. MSU rushed for only 37 yards on 15 carries over the final 30 minutes. As for the secondary, Mark Dantonio referenced blown coverages, and senior safety Kurtis Drummond said the self-proclaimed "No Fly Zone" had missed alignments and missed assignments. Now is the time to get this stuff sorted out, people.

Many players struggled in Michigan?s 31-0 loss at Notre Dame last week. Chief among them: QB Devin Gardner, who had four turnovers. It was quite a contrast to Gardner?s effort vs. ND last year, when he had 376 yards of offense and five scores. Still, despite the poor performance, Gardner will remain the Michigan signal-caller. Why not? I don?t see Brady Hoke handing the reins to inexperienced Shane Morris in this critical season, do you?

Ohio State can relate to struggling. The Buckeyes are coming off a tough home loss to Virginia Tech. The pass defense that was revamped by new co-defensive coordinator Chris Ash remains a work in progress.

Bill Landis of Cleveland.com says that Ash's new defense is supposed to be more aggressive, akin to the units he guided to top-20 finishes in pass defense as Wisconsin's defensive coordinator from 2011-12. From the sound of it, this Buckeyes' defense isn't quite ready for the full brunt of Ash's system.

"We only ran about four coverages the whole game, probably not even that," safety Tyvis Powell said. "It was just breakdowns. Little breakdowns happen."

Here's a good video show on Ohio State and the Big Ten from Cleveland.com.

Where does the league go from here? The Big Ten will have to wait until the postseason to impress.