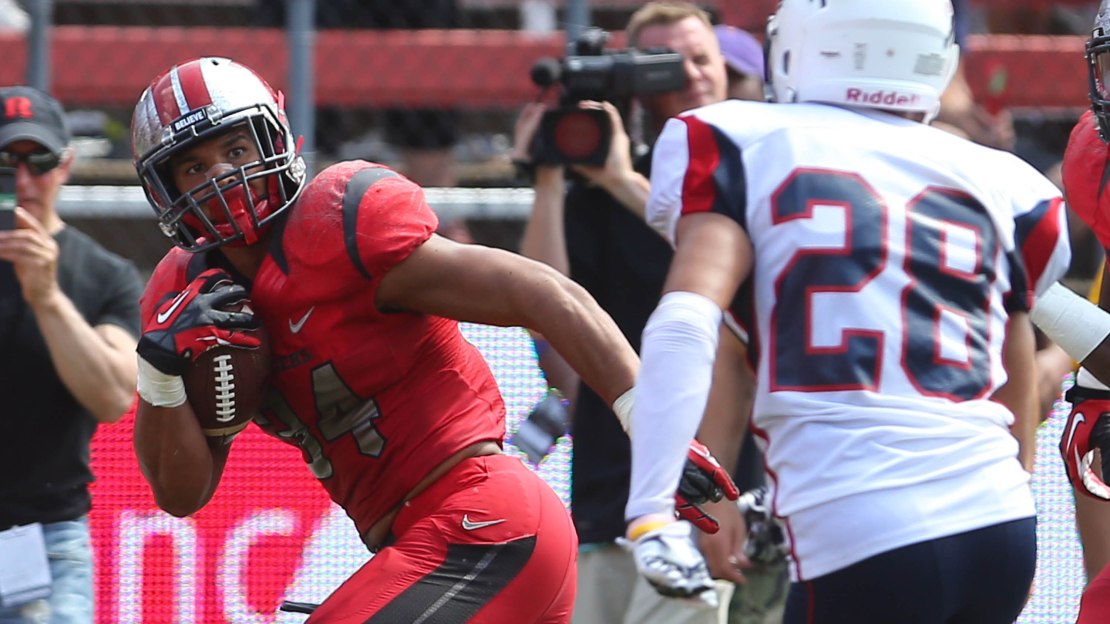 Week 3 is on our doorstep. We've seen all but one team (Indiana) play two games, so it's a good time to assess several of the key questions facing the Big Ten and its teams entering Saturday. See my answers to the questions I'm seeing and hearing the most about in this post.

1. Does the Big Ten still have playoff hopes?

Let?s be perfectly clear: Michigan State is the league?s best hope to earn one of the four playoff spots. No revelation there. (Still, should the West champ also run the table, it may have a shot.) The loss at Oregon hurts. Regardless, the Spartans figure to have a good shot for the postseason if they can run the table. Look at their schedule. MSU should be favored in every game. The marquee games: Nebraska visits MSU on Oct. 4; Ohio State comes to East Lansing on Nov. 8. Not only must the Spartans win-out, but they probably need to win out in impressive fashion to compensate for not playing many high-profile games vs. highly ranked foes.

2. Will Michigan recover from the shutout loss at Notre Dame?

I am concerned by the psyche of this team. Everyone is saying the right things after that humbling 31-0 loss at Notre Dame. But what will happen? Pay no heed to the result of this week?s game vs. Miami (Ohio), which is awful, riding an 18-game losing skid. Let?s see how the Wolverines do vs. Utah the next game. More vital will be the trips to Michigan State on Oct. 25 and Ohio State on Nov. 29. Those are Michigan?s peers. Let?s judge the Wolverines based on those games.

3. Will the Ohio State OL figure it out?

Two games in, no improvement. This is a concern. I have faith that line coach Ed Warinner will get the unit up to speed, just as he did in 2012. The unit is breaking in four new starters, so it could take a bit more time for the front to emerge. OSU is 10th in the Big Ten in rushing. This must improve to take some pressure off redshirt freshman QB T.J. Barrett. Expect the big boys to begin hitting their stride.

4. It might sound crazy, but what about Penn State as the East champion?

Yes, there is a lot of excitement and mojo surrounding the Nittany Lions. They are 2-0, playing well on both sides of the ball, and they have a little extra glide in their step after receiving news that the bowl ban has been lifted. That said, this team isn?t ready to win the Big Ten East. Depth issues on the offensive line and a linebacker will be difficult to overcome over the long haul. And Michigan State will be tough to catch — interesting to note: Penn State hosts Michigan State in the final week. Not this year, Nittany Lions. But I can?t wait to see where this program is in a year or two.

McEvoy looked good last week, hitting 23-of-28 passes for 283 yards with three touchdowns and a pick for the Badgers. But that was vs. FCS Western Illinois. In the opener vs. LSU, McEvoy looked lost in completing 8-of-24 passes for 50 yards with two interceptions. Add it all up, and he has hit 31-of-52 passes for 333 yards with three touchdowns and three interceptions. Who is the real McEvoy? He still has a lot to prove. The good news: The schedule is kind and offers time to grow. Wisconsin is off this week and then plays host to Bowling Green and South Florida.

This team is for real. No, the Scarlet Knights aren?t going to win the East. But this squad looks better than most thought. Rutgers? tough, physical, down-hill running game led by RB Paul James will keep it in most games. And the defense is underrated. The line is deep and talented. And there?s speed in the back seven led by LB Steve Longa. If RU beats visiting Penn State, it has a good shot to open 5-0 with Michigan coming to Rutgers on Oct. 4.

7. After playing two close ones, is Iowa still a threat in the West?

No doubt, the Hawkeyes have to play better. The running game has disappointed, ranking 11th in the Big Ten (132.0 ypg). The ground game was supposed to be the identity of this attack. Iowa?s leading rusher through two games? QB Jake Rudock, with 11 carries for 53 yards. Rudock is carrying a huge load, also throwing a Big Ten-high 93 passes for 572 yards and four touchdowns. Unless this offense gets some balance, Iowa may struggle to compete for the West title. Compounding matters is news that star tackle Brandon Scherff has injured a knee and is not expected to play this week.

Reports say he?s practicing this week after injuring his left MCL vs. Middle Tennessee State last week. If Leidner can?t go at TCU this Saturday, the Golden Gophers will turn to redshirt freshman Chris Streveler. He played last week in relief of Leidner but didn?t throw a pass. If Minnesota has to go with Streveler, it will be pressed hard to win. Even with Leidner, the Gopher passing attack was pedestrian at best, ranking 13th in the Big Ten. Without him?

As ugly and dispiriting as last week?s 38-17 home loss was to Central Michigan, hope floats in West Lafayette for 1-1 Purdue. Always remember: Things never are as good or bad as you think. The Boilermakers will taste victory at least one more time this fall, when FCS Southern Illinois visits Ross-Ade Stadium on Sept. 20. Savor it, Purdue Pete.