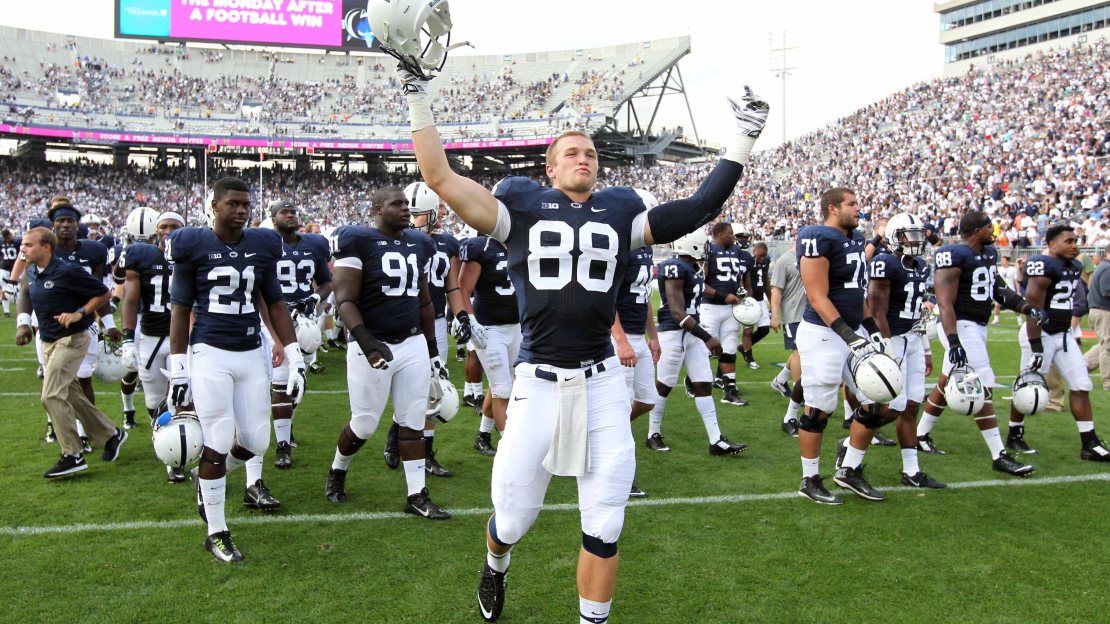 Penn State got big news on Monday when the NCAA announced the school?s bowl ban has been lifted in addition to scholarship numbers being restored to 85 by 2015. Great news for a rising program under first-year coach James Franklin. The students were overjoyed. Check out this video.

David Jones has three reasons why PSU could become relevant very fast in the Big Ten. And I have to agree with him. This is already a program with a lot of momentum under Franklin, who is off to a 2-0 start and has been white hot on the recruiting trail.

As you would suspect, Franklin is appreciative of opportunities now at his feet in 2014. PSU can go bowling and play in the Big Ten title game.

What bowl could this team go to? It may be able to grab a nice one if it can stay healthy. And in addition to being bowl eligible again, the Nittany Lions also are eligible to win the Big Ten. What does Penn State?s return to the title hunt mean for the rest of the league?

Michigan State will be tough to beat for the East title. It?s still the Spartans? division and league to lose. But could the Nittany Lions finish second in the East? That Ohio State at Penn State game on Oct. 25 will be a table-setter.

Speaking of Ohio State ? what do the Buckeyes need to fix in the wake of their loss to Virginia Tech? Check out this video from Cleveland.com.

I think OSU needs more from its skill plays to help redshirt freshman quarterback J.T. Barrett. The kid can?t do it himself. Receivers can?t drop passes. The running backs need to make plays. And the o-line? Lots of improvement is needed.

I am excited about this Penn State at Rutgers. This is exactly what the Scarlet Knights need, an anticipated game in their first-ever Big Ten contest. And it?s vs. Eastern rival Penn State, as both teams are unbeaten. This is a perfect scenario as the sheet it taken off Rutgers? Big Ten era. Turns out, Joe Paterno always was an advocate of Rutgers long before it joined the Big Ten.

Last Saturday wasn?t a good one for the Big Ten. In fact, Stewart Mandel of FOXSports.com has what he thinks is the reality of the Big Ten?s ugly playoff narrative in this video.

I said it before, I?ll say it again: Don?t write off the Big Ten just yet. It?s way too early for that. Michigan State has a good shot to run the table from here. And, who knows? Maybe MSU could meet Oregon in the playoffs.

Count Mike Griffith of Mlive.com among those who thinks the Spartans still can make the four-team playoff if they win out. Only falling to No. 13 in the AP poll showed respect for MSU-and fuels Griffith?s optimism. Mine, too.

"We'll bounce back, there's no question we'll bounce back," Mark Dantonio said.?Our program is in good shape, we're not going to fall away. We have to regain momentum and that's what we'll do."

The fan hood of Michigan followers is being tested by the recent loss at Notre Dame that dropped the Wolverines to 3-7 in their last 10 games. Brady Hoke says real fans will stick with the team.

"If they're truly fans, they'll believe in these kids and what they've done and the hard work they've put in," Hoke said Monday. "If they're not, they won't."

Hoke has struggled against Michigan?s rivals: Notre Dame, Michigan State and Ohio State. He is 4-6 vs. the trio-and 0-5 against them on the road.

This has been an issue that predates Hoke. The Wolverines are 6-13 overall against Michigan State, Notre Dame, Ohio State since 2008. Are those schools really that much more talented than Michigan?

Minnesota QB Mitch Leidner has a strained MCL. His status for Saturday?s game at TCU is uncertain. If he can?t go, Chris Streveler will take over. Not an ideal situation for the Golden Gophers.

"He's got to step up if that's the situation," Jerry Kill said Saturday. "I hope that's not the case right now. That's nothing against Chris. You don't want anybody to get injured."