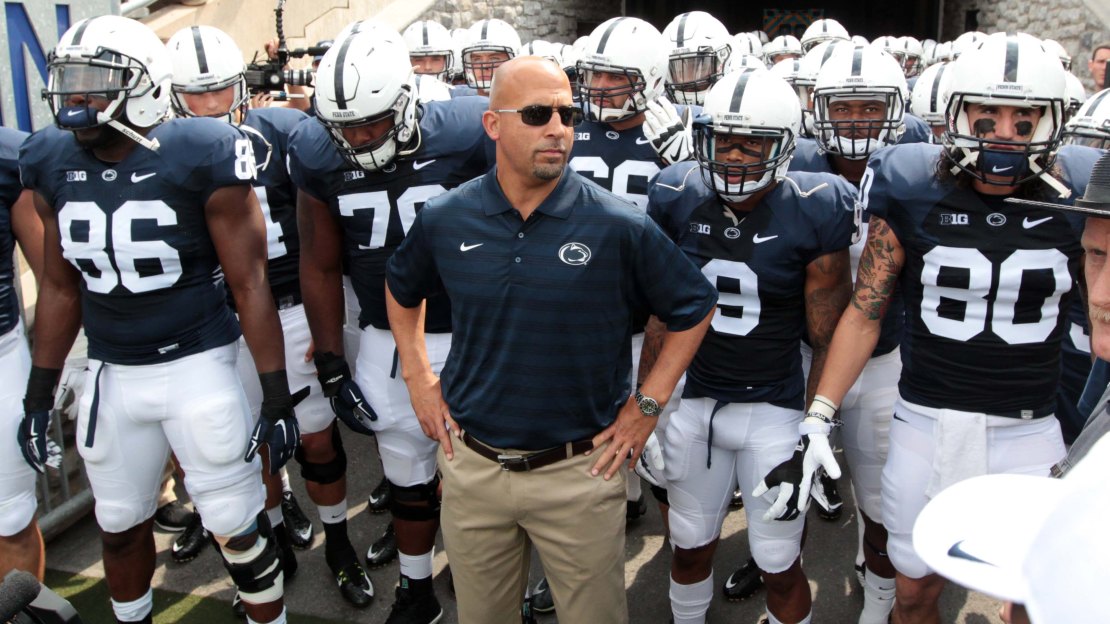 The NCAA announced Monday that Penn State?s postseason ban has been lifted effective immediately. Also, the school?s full complement of football scholarships will be restored for the 2015 season. Read full release. Moments later, the Big Ten announced that the Nittany Lions are eligible for the 2014 Big Ten title game.

?We are very appreciative of the opportunities the NCAA and Big Ten have provided with today?s announcement,? James Franklin said in a team release. ?This team plays for each other. We play for Penn State, our families, the former players, our students, alumni, fans and the community. We are so proud to represent Penn State and the Big Ten Conference and are working hard to prepare for our Big Ten opener at Rutgers.?

It wasn?t a shocking revelation to see any of this happen. There had been rumblings over the summer that the ban could be lifted based on a positive report from former U.S. Senate Majority Leader George Mitchell, who is monitoring the school?s compliance to sanctions imposed by the NCAA following the Jerry Sandusky scandal. This is the second positive review from Mitchell.

?Penn State?s commitment to the integrity of its athletics department and its progress toward meeting the requirements of the Consent Decree are clear,? said Northern Arizona President Rita Hartung Cheng, who chaired Monday?s Executive Committee meeting. ?We thank Senator Mitchell for his meticulous and exhaustive work over the past two years. Mitchell?s efforts and the dedication of Penn State officials made today?s decisions possible.?

This is great news for Franklin as he continues to build the program that initially was given a four-year bowl ban-among other sanctions that many felt were too harsh–as part of the Sandusky scandal.

Proud day for Penn State Football. All I can say is? Its about time. #WeAreBack

Being able to sell the fact the Nittany Lions can play in the postseason certainly will help recruiting, an area in which Franklin already shines. Penn State has missed the last two postseasons because of NCAA sanctions, going 8-4 in 2012 and 7-5 in 2013. The Nittany Lions last played in a bowl after the 2011 season, losing to Houston in the TicketCity Bowl.

This year?s team is off to a 2-0 start, beating UCF in Ireland and Akron, and should get to six wins to earn a bowl slot. Heck, they could be a force to win the inaugural East Division and advance to Indy.

The Nittany Lions have a big game this Saturday at Rutgers. Knowing it is bowl eligible certainly will fuel enthusiasm among the team.

Today is a memorable day for these young men! The men who stayed together for each other! Today Penn State is back! pic.twitter.com/GoZXRLwL1X

Franklin currently has 75 scholarships available. He'll have 85 next year, which levels the playing field for a program that has had to deal with depth issues in the last two-plus seasons. The linebacking corps and offensive line are especially thin.

According to Rivals.com, the Nittany Lions currently have the No. 8 recruiting class in the nation with 19 commitments.