How big is Penn State at Rutgers? That and more in Monday's Big Ten headlines 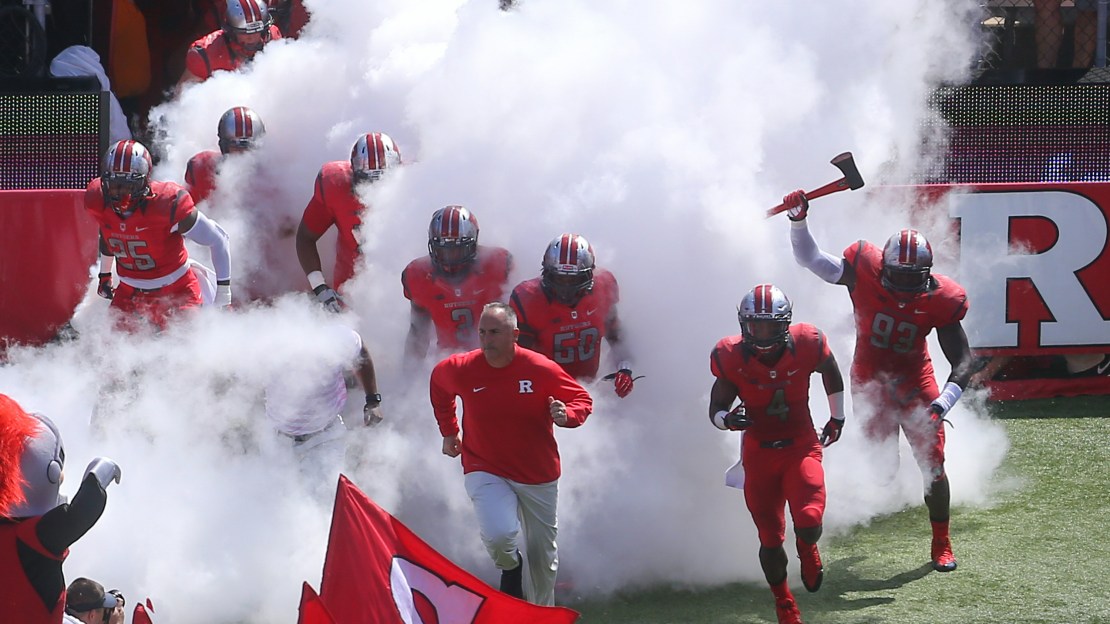 Rutgers has a huge game this weekend with Penn State coming to campus. It is one of the most anticipated home games in recent school annals. And Dan Duggan of NJ.com has five reasons why Rutgers should feel confident. I feel confident for the Scarlet Knights, who are 2-0 and feeling confident. This is a solid team.

Speaking of Rutgers, it looks like Kyle Flood has taken a page from Brady Hoke in developing a pet name for a rival. Flood refers to Penn State as ?the team from Pennsylvania.?

Flood also uses "PSU," or "the neighbor to the west" when talking about Penn State. Whatever.

"I think there's a lot of ways you can describe where that university is and what they are," Flood said. "Some I use, some I don't.

Nick Baumgardner grades Michigan's performance at Notre Dame in a 31-0 loss. As you would suspect, he has a difficult time finding positives.

Baumgardner gave only one F. I suppose there could have been more. And that one F went to the coaching staff. This is when Brady Hoke and Co., really will earn their money. On Saturday, this team looked a lot like the one that got whipped by Kansas State in the bowl game to end last season. No good. This is gonna be fascinating to watch play out. Hoke is one of the game?s good guys. I hope he flips the script.

Michigan State?s loss at Oregon came with sudden swiftness. One moment, the Spartans are winning, 27-18, in the third quarter. The next, they were buried in an avalanche of points in a 46-27 defeat. Maybe the Spartans can use the defeat as a turning point, as they did last year following a loss to Notre Dame. After that setback, MSU didn?t lose again en route to a 13-1 season of glory.

?Hopefully we?ll do it the exact same way we did against Notre Dame,? Spartans tight end Josiah Price said. ?We?ll go back and we?ll do a little soul searching to figure out what we?ve got to do to get wins down the stretch against quality opponents in big-time environments.?

So far, so good for Penn State, which is off to a 2-0 start. I didn?t see this coming. James Franklin has to be pleased. But he?d like to get more players involved to build his team?s depth.

Audrey Snyder of Pennlive.com notes that Penn State has 75 scholarships this season, which is 10 fewer than the full allotment. Depth issues persist at linebacker and along the offensive line. There are just six healthy linebackers on scholarship and only one offensive lineman had starting experience when 2014 dawned. The Lions have used four true linebackers so far this year not counting Adrian Amos and Jordan Lucas who can play a hybrid role. This is a delicate balancing act. How long can PSU walk the tight rope?

It was quite a reversal of fortune for Wisconsin QB Tanner McEvoy from the opener vs. LSU to last Saturday vs. Western Illinois. I guess he answered his critics with a big effort vs. WIU.

I guess I?m not ready to say that I?m sold on McEvoy just because he sliced up FCS Western Illinois. I need to see more, especially vs. a quality foe. But, golly, look at the Badgers? schedule. When exactly will McEvoy be tested? Probably not until a visit from Nebraska on Nov. 15.

So, where does Northwestern go from here following another home loss that saw QB Trevor Siemian get hurt?

The Wildcats are off this week. Is that a good thing? A bad thing? I guess if I was NU, I?d want to play again this week instead of having two weeks to stew in these losses. But, the time off may give the Wildcats time to sort things out. After all, there is a lot to sort out in a season that?s already threatening to go off the rails.

With the home loss to Virginia Tech, is the honeymoon over for Urban Meyer at Ohio State? It?s a subject broached by Doug Lesmerises of Cleveland.com. That?s three losses in four games, albeit vs. quality foes. Still, the crash-landing at the end of last season coupled with the loss of Braxton Miller and the loss to Va Tech ? Some challenges loom for Meyer and Co.

Minnesota moved to 2-0. But in the process, it may have lost QB Mitch Leidner to a left knee injury. Not good. It?s not as if Leidner was lighting the world on fire. Still, he is the lone experienced signal-caller on the roster. Without him, an already anemic passing game may be worse.

If Leidner can?t go, Chris Streveler would get the start at TCU-an ultra-tough place for the debut of a young passer. He would be the fifth starting QB in the last three seasons for Minnesota.

"He's got to step up if that's the situation," Gophers coach Jerry Kill said. "I hope that's not the case right now. That's nothing against Chris. You don't want anybody to get injured."

Iowa is looking for some top wideouts. And, it may have found one in Derrick Willies.

Before the season started, Kirk Ferentz said he didn't think Willies was out to "create a brand or something like that? I think he's worried about being a good Iowa football player. And that's refreshing."

Willies may not be a Big Ten brand name yet, notes Rick Brown of HawkeyeCentral.com. But he gives the Iowa passing game another downfield threat that was sorely needed.