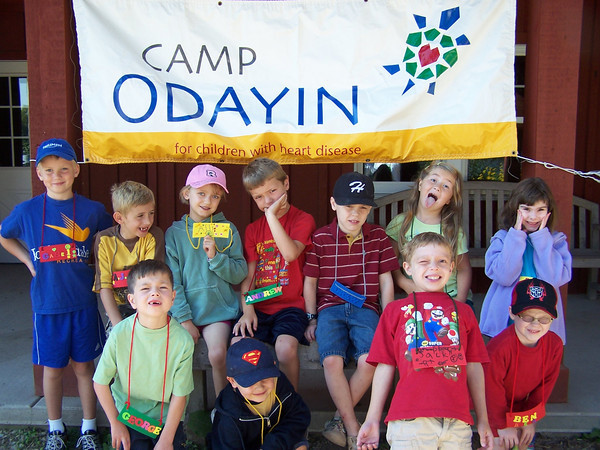 Most people probably have memories from childhood of going to some kind of summer camp. And many of those memories probably involve bug bites, bad food, uncomfortable beds and various other examples of "roughing it." But they also include friendships, laughter and fun.

Because of the physical limitations and strict medical requirements they face on a daily basis, kids who have heart disease don't get to experience going to camp. Minnesota alumna Sara Meslow started a program to give those kids the chance to do just that. She created Camp Odayin in part because she was intimately familiar with the affliction.

"I'm a heart person myself," Meslow explained. "I received an ICD [implantable cardioverter defibrillator] in January of 2000."

The year before her procedure, Meslow finished a master's degree in youth development leadership at the University of Minnesota. With her own heart disease as a new part of her life, she started the program the year after her surgery.

"In 2002, we had one week of camp and 53 kids from six different states," she said. "This year, we served over 280 kids for five weeks of summer camp from 15 different states. We now have a winter camp, family camp and young adults retreat as well.

"We call it their heart family. These folks are coming to us at all different stages, and they're looking to connect with their heart families. We're doing year-round work with kids with special hearts."

The most recent addition to the camp's schedule is the young adults retreat. The camp serves students between the ages of 6 and 17, but Meslow saw a need for students to stay connected after finishing high school.

"Our young adults retreat is for former campers who are independent in managing their medication and health care, are off to college and are trying to figure out how to navigate life with heart disease without a parent," Meslow said. "We were hoping for 20 to show up, and there were 62 from eight different states and Canada. It was an amazing weekend. That's telling us that even though students have aged out of our camps, they still want to be part of their Camp Odayin family."

For the past five years, the camp has strengthened its bonds with University of Minnesota. Through St. Jude's and the MAGIC Bus, Golden Gopher athletes have become a part of the lives of the children by visiting Camp Odayin for a full day of various activities.

We had the time of our lives! Thank you @campodayin! pic.twitter.com/XGpWZj8KYu

"This year, 16 student-athletes came and brought a healthy snack, played with campers and brought up a craft project," Meslow said. "It's a wonderful opportunity to interact with these great role models."