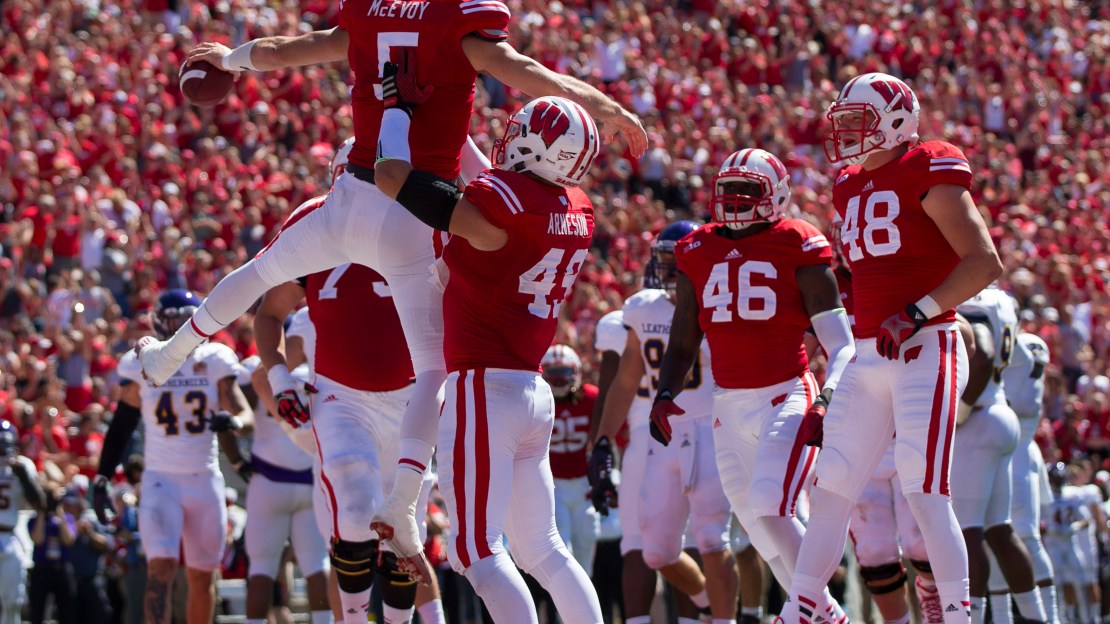 Saturday dawned with great possibilities for the Big Ten. But, the conference failed to capitalize in three big matchups.

Michigan State lost the marquee clash, falling, 46-27, at Oregon. Michigan was pummeled, 31-0, at Notre Dame. Ohio State was beat at home by Virginia Tech, 35-21. And on it went on a day when the league suffered two losses to MAC teams, as well.

Here?s a look at the good-and not so good-from this difficult day for the Big Ten.

Biggest surprise: Michigan getting waxed, 31-0. Yes, a win would have been tough to get. But to get whipped like this was a huge step back. The Wolverines are 3-7 in their last 10 games. Since whipping ND last year, Michigan has beaten Akron, UConn, Minnesota, Indiana, Northwestern, App State. That's it.

Biggest disappointment: The Big Ten overall. The failure to win any of its marquee matchups was hard to watch. This comes a week after Wisconsin let one get away vs. LSU. Read more of my thoughts.

Play this again: Nebraska's unexpected dogfight with McNeese was a thriller, ultimately decided by a wild TD catch and run by Ameer Abdullah with 20 second left in the game.

Never play this again: The Michigan at ND game. Just a poor effort all the way around by the Wolverines. Nothing memorable for Michigan about this final regularly scheduled meeting between these iconic schools. Too bad the last meeting for the time being had to be a clunker.

Best play: Has to Ameer Abdullah breaking five tackles and racing 58 yards on a short pass with 20 seconds left in the game to score the winning points a 31-24 victory vs. McNeese State.

Rutgers. Was it a textbook win over FCS Howard? Nope, but it was a win for the Scarlet Knights, nonetheless, pushing them to 2-0 with a huge home game vs. Penn State next. Dreams of a 5-0 start still loom. I like this team and its mojo. How about Paul James? He ripped through Howard on Saturday for three touchdowns, the second week in a row he tallied three scores, including a pair through the air.

Tanner McEvoy. The Wisconsin signal-caller needed an effort like this. Yes, it was just FCS Western Illinois. Still, McEvoy needed his confidence and psyche lifted after hitting just 8-of-24 passes for 50 yards and two picks last week vs. LSU. McEvoy completed 23-of-28 passes for 283 yards with three touchdowns and an interception today. He also ran nine times for 55 yards and a score in the 37-3 victory.

Gary Nova. No doubt, the influence of new offensive coordinator Ralph Friedgen is paying off. The senior hit 15-of-19 passes for 282 yards and four touchdowns. Last week in a win vs. Washington State, Nova, hit 16-of-27 passes for 281 yards and two touchdowns with a pick.

Christian Hackenberg. The Penn State sophomore continues to impress. After becoming the first Nittany Lion ever to throw for 400 yards (454) last week vs. UCF, Hackenberg hit 22-of-36 passes for 319 yards and three touchdowns in a methodical 21-3 win vs. Akron.

Wes Lunt. Two weeks, two big-time efforts for the Illinois sophomore quarterback. He hit 35-of-50 passes for 456 yards and three TDs today vs. WKU. Illinois had nine penalties and three turnovers. Still, Lunt saved the day. Lunt is 59-of-88 for 741 yards with seven touchdowns and a pick through two games in 2014.

Alex Erickson. The Badgers may have found their No. 1 wideout. The 6-0 sophomore looked good all day, catching 10 passes for 122 yards and a TD.

Ameer Abdullah. The Nebraska running back saved the day, breaking five tackles and racing 58 yards for a touchdown on a short pass with 20 seconds left in the game to score the winning points a 31-24 victory vs. FCS McNeese State. It was the longest go-ahead fourth-quarter TD for Nebraska since Sept. 30, 2006.

Justin Hardee. The Illini wideout nabbed six passes for 110 yards and a score.

Jake Rudock. He has become the focal point of an Iowa offense that was supposed to be built around a strong rushing game. Rudock hit 31-of-41 passes for 250 yards and two touchdowns in the opener. This week, he completed 33-of-52 passes for 322 yards and two touchdowns-both in the fourth quarter–in a comeback 17-13 win vs. Ball State. He hit 11 different pass catchers. His final completion was a game-winning 12-yard strike with a minute left to rally Iowa from a 13-3 fourth-quarter hole.

David Cobb. The beat goes on for the Minnesota back, who ran 29 times for a career-high 220 yards with two touchdowns in a 35-24 win vs. Middle Tennessee.

Iowa defense. It didn?t yield a touchdown vs. Ball State, which had just 219 yards.

Maryland special teams. Trailing 17-14, the Terrapins blocked a fourth-quarter USF punt to score what proved to be the game-winning points.

Connor Cook. The MSU quarterback did his part vs. Oregon, hitting 29-of-47 passes for 343 yards with two touchdowns and two picks. Ditto Tony Lippett, who had 11 grabs for 133 yards and a score.

Gopher defense. Yes, Minnesota allowed 445 yards. Still, it generated three turnovers and scored a TD, as the Gophers built a 28-0 halftime lead and hung on.

Ohio State rushing game. The Buckeyes had 40 carries for 108 yards (2.7 ypc) for an attack that had just 327 yards overall. This was Ohio State?s first home-opening loss since 1978.

Most everything Michigan. No shame in losing at Notre Dame. But to get hammered, 31-0, in the last scheduled meeting with the Irish is tough to swallow. Any feel-good vibe from last week?s romp over App State has vanished. Questions about the offense nag just has hard after the Wolverines mustered only 289 yards. And the beleaguered rushing game? There were 35 carries for 100 yards (2.9 ypc). QB Devin Gardner also struggled, tossing three picks. Michigan's NCAA-record streak of scoring in 365 straight games that dated to 1984 ends.

Michigan State defense. If the game had ended halftime, things would have been hunky-dory for MSU. Alas, those last two quarters were fateful, as Oregon outscored the Spartans, 28-3, in a 46-27 victory. The Ducks scorched MSU for 491 yards, with 318 via the air and 173 on the ground.

Purdue. There is really no way to sugarcoat this: The Boilermakers aren?t good. They found a way to climb over Western Michigan last week. But Central Michigan dominated Purdue from start to finish in a 38-17 win by the Chips, who led 31-10 in the fourth quarter. Penalties-seven for 69 yards-and turnovers-three–are very disconcerting for the Boilers. Attention to detail and discipline have to be questioned. Victories may be very difficult to come by. Is this another one-win season? Oh, Notre Dame is next.

Iowa kickers. Two of them combined to miss field goals from 35, 37 and 29 yards in a near-disastrous home loss to Ball State. The Cardinals also turned two turnovers into 10 points, seeing a 13-3 fourth-quarter lead vanish.

Danny Etling. Is the sophomore the answer at quarterback for Purdue? A debate may be raging, as he was pulled for Austin Appleby in the fourth quarter. For the second week in a row, Etling didn?t impress. He hit 17-of-32 passes (53 percent) for 126 yards and two picks. Etling hit just 50 percent of his passes in the opener.

J.T. Barrett. Chalk this up as a learning experience for the redshirt freshman Ohio State quarterback. The offensive line didn't help, but Barrett hit just 9-of-29 passes for 219 yards with a TD and three picks. He carried 24 times for 70 yards and a score.

Illinois rushing. Just 64 yards on the ground vs. Western Kentucky won?t cut it. Donovonn Young had 47 yards; Josh Ferguson had 32.

Iowa run game. It has struggled the first two weeks. In the opener vs. Northern Iowa, the Hawkeyes ran 36 times for 151 yards (4.2 ypc). Vs. Ball State, Iowa had 29 carries for 113 yards (3.9 ypc). Jake Rudock was the leading rusher (7 carries/36 yards). Wideout Tevaun Smith led Iowa in rushing in the opener (1 carry/35 yards). Where are the running backs?