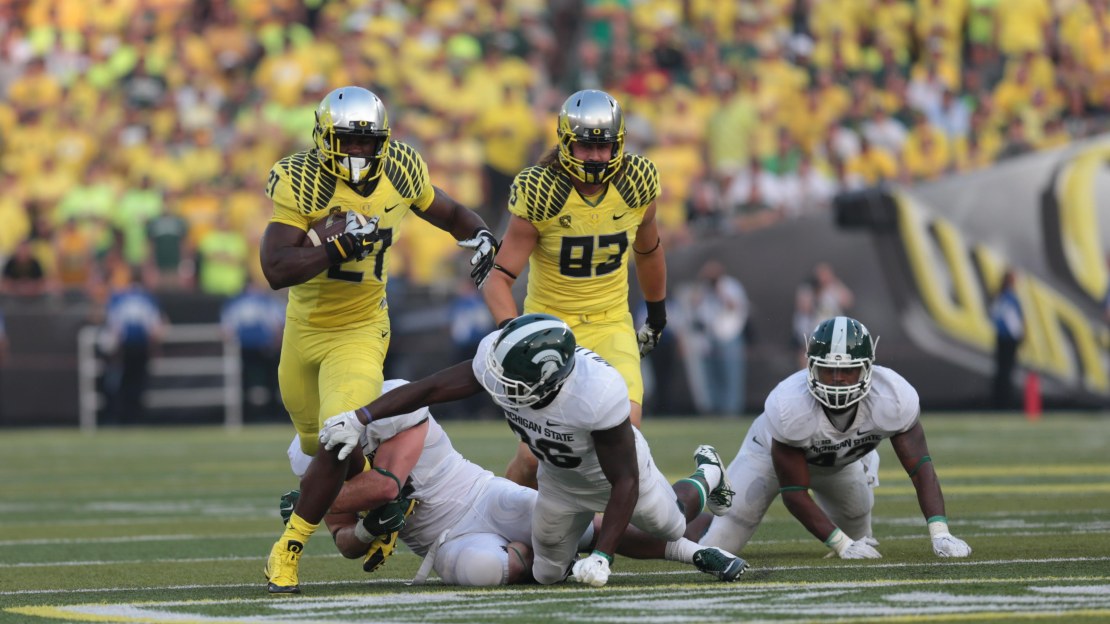 It was all right there for the Big Ten on this day, prime for the taking. Three big games. Win them all-or at least two of three-and the Big Ten?s sagging Q rating would have risen. The Big Ten flopped, and it wasn?t pretty.

Michigan State fell at Oregon, 46-27 — although it was closer than the score indicated.

Michigan got whipped at Notre Dame, 31-0.

Ohio State got dumped at home by unranked Virginia Tech, 35-21.

The early games weren't much better.

Purdue was stuffed at home by Central Michigan, 38-17.

Northwestern looked flat in a second home loss in a row, falling 23-15 to Northern Illinois.

Even many of the wins failed to impress. Iowa (Ball State) and Nebraska (McNeese State) needed late-game heroics to avoid embarrassing home losses to lesser programs. Illinois also had to stage a fourth-quarter rally to slip by Western Kentucky.

[ MORE: Relive all of the Week 2 action on our Big Ten scoreboard ]

And all of this comes on the heels of a season-opening weekend that saw Wisconsin blow a 24-7 third-quarter lead to LSU, giving the SEC another bragging point while keeping its foot firmly on the Big Ten?s neck.

This prove-it weekend was framed by Michigan State at Oregon, though. That was the headline event, the must-watch game, a battle of top-10 powerhouses billed by some as the best non-conference game of the season.

At one point, Michigan State was in control. Really. The Spartans ripped off 20 straight points to forge a 27-18 lead in the third quarter. Things were looking good. Then, as quickly as you can say ?Marcus Mariota? three times, MSU was in Oregon?s rear-view mirror.

Oregon ripped off 21 consecutive points, giving it a 39-27 lead as the fourth quarter dawned. The Ducks added another TD en route to outscoring MSU, 28-3, in the second half.

"Things sort of turned on us," Mark Dantonio said. "So, we have to regroup, we have to handle the adversity of the situation we are in."

It all happened with such stunning quickness. The Spartans? 11-game winning streak was toast. And they were left to contemplate their future-and wonder just how well they measure up with the nation?s elite.

Just know this: Michigan State?s playoff hopes aren?t dashed. And neither are Ohio State?s-or any other Big Ten team, for that matter. (Well, maybe a few ? but let?s try to stay as positive as we can on this oh-so-bummer day.)

Yes, many factors are at work, not the least of which is the fact the season is just two weeks old. It?s early, people. One loss on September 6 doesn?t torpedo playoff hopes for anyone. You?ve heard the adage: If you?re going to lose, lose early in the year.

Still, a win today by Michigan State would have positioned it to snag a playoff spot. Look at the rest of the Spartans? schedule-they figure to be favored in every remaining game. A 13-0 run wasn?t out of the realm of possibilities.

But, again, the Big Ten still could earn a playoff spot. But to do so, the league champ probably has to go unbeaten in league action with just one defeat overall-and hope there is some attrition and slip-ups in other major conferences along the way.

Now, the Big Ten will have to wait to polish an image that has been sagging ever since Ohio State lost back-to-back BCS title games to Florida and LSU after the 2006 and 2007 seasons.

The Big Ten goes to bed on this night wondering: What if? A nightmarish Saturday is over. Are better days ahead?