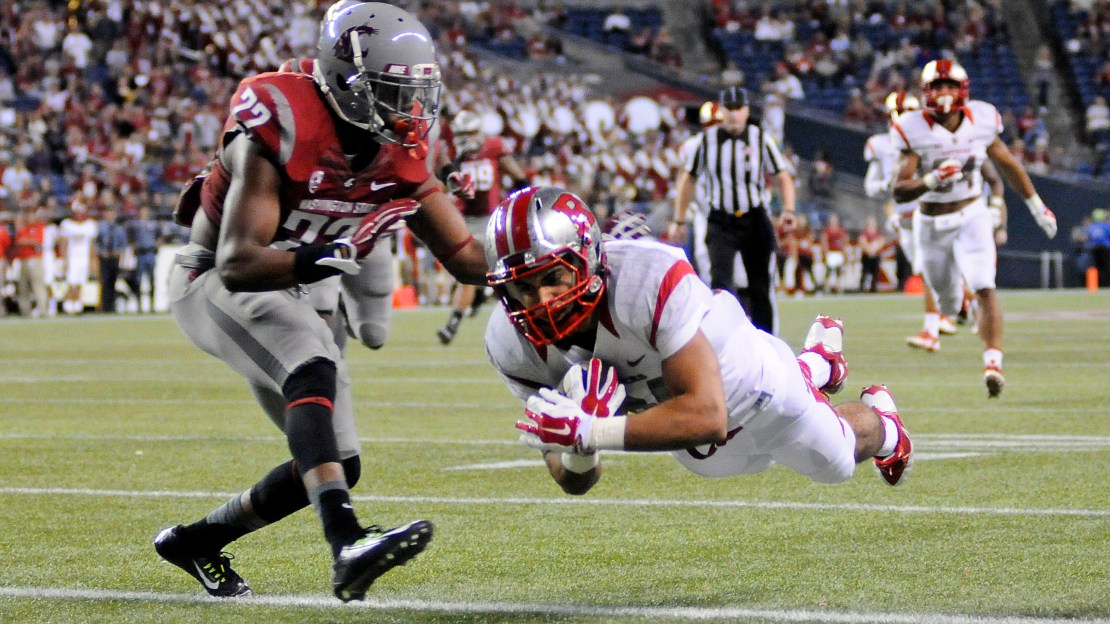 Ohio State?s announcement of a two-game series with Notre Dame was lauded nationwide. Bravo! But the timing of the announcement made some think it was a dig at Michigan, which is seeing its long-standing series with the Irish come to end. So, if ND can?t play the Wolverines, how come it can play the Buckeyes? Ah, forget it.

Instead, look at some of the Buckeyes? future non-league foes and you have to be impressed. This program is putting together some nice matchups. Thanks! In fact, in 2022 and 2023, OSU will play ND and Texas!

Watch Rutgers back Paul James run. You?ll be impressed. So physical, so tough. Turns out, teasing and taunting helped make him the player he has become.

?He was a Barry Sanders-type runner when he was younger,? Paul James Sr. said. ?He could make people miss. So everybody used to tease him and tell him he couldn't take a hit, that he wouldn't make it in high school football because it was more physical.

?He?s a guy worried about his player,? Alvarez said, ?trying to protect his player.

Michigan?s offensive line looked good in the opener vs. Appalachian State. But Brady Hoke isn?t saying how the unit will line up this week vs. Notre Dame. Regardless, the Wolverines can count on seeing a lot of pressure for the Irish, right? Right.

The return of junior Graham Glasgow could change things, as he will be available to play this week in South Bend after serving a one-game suspension. He started all 13 games a year ago. No doubt, it is good to have him back in the mix.

Michigan State coach Mark Dantonio is always looking to take that proverbial next step as a program. Well, playing-and beating-a team like Oregon on the road certainly would qualify as taking a ?next step.?

?I said ?OK, yeah we?ll play? but with the idea being at that time that by the time we got to 2014 that we?d be ready to play in this type of game with national prestige and a little bit or prominence about the game,? Dantonio said Wednesday on Fox Sports Radio.

?We would take the proper steps to be able to get there. We?ve done that. This is the next step to our program to be able to play this type of game, much like our basketball team does early in the season.?

Read more of our Week 2 preview coverage with these links:

Oregon will be ready. It has heard the comparisons between MSU and Stanford, the team that has been the Ducks? kryptonite.

?They lost last year to Stanford, so I think Stanford's offense is a little bit more like us maybe than some of the other football teams, so you can certainly see some of the things that they did there,? Spartans coach Mark Dantonio said. ?But we'll look at all the different games and try and draw something from every single football team that have played them in the hopes that we have the answers.?

Penn State blitzed often vs. UCF in the opener. And it almost proved costly. Still, don?t expect the strategy to change much moving forward. It?s about high risk, high reward. Coordinator Bob Shoop will continue to be aggressive. Smart move for a defense that needs to make things happen.

Just one game into the season, and the gang at InsideNU.com is wondering if Northwestern has slipped.

Since that New Year?s Day bowl win vs. Mississippi State in 2013, things have not gone well for the Wildcats, going 5-8. The loss to a bad Cal team to open the season stung and cast more doubt on things. The long-running theme that the Wildcats are "rising" or "up and coming" under Pat Fitzgerald now seems tenuous at best, notes InsideNU. Hard to argue against that notion.

Marc Morehouse of the Cedar Rapids Gazette has some interesting takes in ?3-and-out.? Among them, the notion of a 10-game Big Ten schedule not being a bad thing. That is something I have advocated for.

Kirk Ferentz seems to be on board. Morehouse points out that there is cleanliness with the 10-game schedule, with the five and five split. Ferentz?s opinion is based in the fact that scheduling is only becoming more and more of a headache. Iowa has FCS schools on the schedule through 2018, but probably won?t be adding any thereafter. That leaves Iowa in a bidding war for two non-conference home games. Iowa will pay Ball State $900,000 for this weekend?s matchup. It just doesn?t make much sense.

The playoff debate already is raging, and we aren?t even two full weeks deep into the season. Which conferences could get two teams in? Perhaps the Pac-12?

That?s correct. Don?t be so quick to say that the SEC will have two playoff teams. It may be the Pac-12, which may be the beat league in the nation. Look at the quarterbacks?