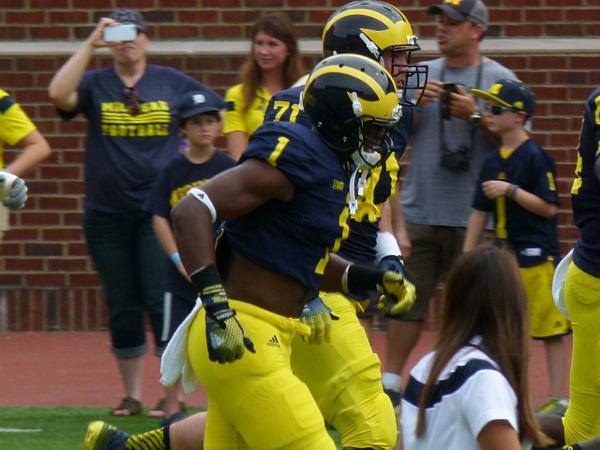 Want to see the Michigan at Notre Dame? You?re gonna have to pay up. Tickets are going for-get this–$349. Let?s hope the last scheduled meeting between these iconic programs lives up to the price of a ducat.

Me? I think the Wolverines will win. They?ve taken four of the last five meetings and have a sense of urgency.

Speaking of Michigan, you had to be impressed with the 1-2 punch of running backs Derrick Green and De?Veon Smith in the opener. If they can keep it up, this could be a very good Wolverines offense.

The twosome is splitting carries in the Michigan backfield and sharing the responsibility of returning viability to the team?s rushing attack. Nick Baumgardner of Mlive.com notes that since ranking 13th in the country with 221.8 rushing yards per game in 2011, Michigan has slipped to 41st in 2012 and all the way to 101st last season. In the 2014 season opener on Saturday, Last week, the opponent was FBS newbie Appalachian State. Still, Green and Smith combined for 285 yards on 23 carries and three rushing touchdowns.

There are a lot of key players for Michigan State in its quest to win at Oregon. But none may be more vital than Trae Waynes, who plays the key boundary corner spot.

?It will be interesting to see how he responds,? Michigan State coach Mark Dantonio said of the challenge Waynes faces replacing Darqueze Dennard, the Thorpe Award winner last season. ?We won a Big Ten championship with him (Waynes) at the wide field corner. You?ve got to be able to do the same with him at the boundary corner.?

In some ways, I think Waynes is better than Dennard.

Funny what a big win in the season opener can do for a team?s expectations. That?s the case for Nebraska, coming off a thumping of Florida Atlantic.

The Huskers could be in store for a big season. And those non-con games vs. Fresno State and Miami (Fla.) don?t so daunting after each opened with a loss. Still, things change a lot week to week in college football. You may want to temper your enthusiasm a bit, Big Red.

Here is a nice Penn State podcast from two of the best in the biz: Bob Flounders of Pennlive.com and Mark Brennan of FightOnState.com.

I don?t know about you, but I am suddenly excited about Penn State football. And you should be, too. If this team avoids injury, it will be much better than I anticipated.

When it comes to facility upgrades, it?s difficult to top what Iowa has just put the finishing touches on.

The first phase of the project, an indoor practice facility, has been open for two seasons. Both phases, called the Stew and Lenore Hansen Football Performance Center, cost $55 million. Add the Ronald and Margaret Kenyon practice facility and Kinnick Stadium, and the entire package is called the Hayden Fry Football Complex.

Speaking of facilities, Minnesota needs to improves its. And, it sounds like it is raising some good cash toward the efforts.

Minnesota athletics director Norwood Teague said at the Land O? Lakes donation news conference Wednesday that the Gophers have now raised $40 million of the $190 million master facilities project. So, Minnesota is a step closer to the Athletes? Village, including $15 million to help build the Athletic Center for Excellence, which will be used for academics and nutrition. This, ladies and gentlemen, is great news for Jerry Kill and Co. No school needs upgrades more.

Big game for Ohio State this weekend, as Virginia Tech is coming to the Horseshoe. Win this, and the Buckeyes could cruise to Michigan State on Nov. 8 with an unbeaten record. A big key to that happening will be an improved pass defense. The hope: a new aggressive scheme/attitude will make a big difference.

Under new secondary coach and co-defensive coordinator Chris Ash, the Buckeyes will have their corners play press coverage. Also, the safeties often will up in coverage. Ohio State will practice pattern matching, attacking and adjusting to receivers within their area rather than playing a portion of the field and giving larger cushions.

"Are there going to be completions? Absolutely," Ash said. "But our mentality is we're going to challenge everything. If a ball is completed, it better be challenged, and they better have to work to make the catch."