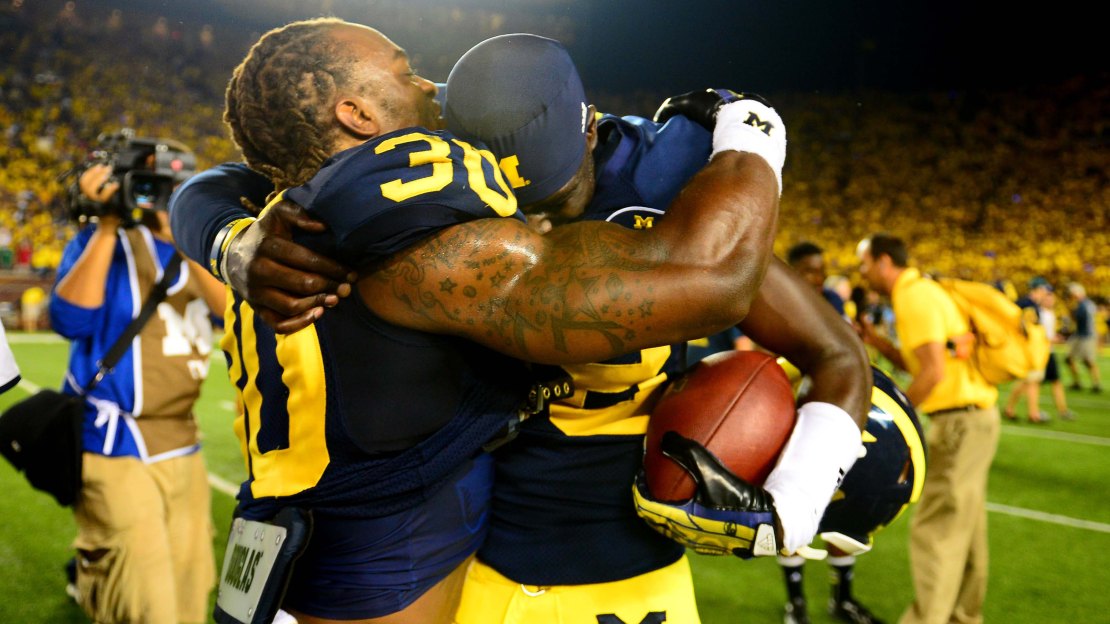 Yes, this is the last time Notre Dame and Michigan will meet for the foreseeable future. But this is no time for the Wolverines to get verklempt.

Forget emotion and sentimentality. Nope. This trip to South Bend for Michigan can serve as a springboard for a Wolverines program that, well, needs some spring-a lot of it. You see, Michigan?s business is supposed to be about winning. But, business hasn?t been good.

This Saturday?s tilt is not the most important game of the Brady Hoke era. That status forever will belong to the Michigan State and Ohio State contests. But this year?s Notre Dame game could be a season-definer-and perhaps a career-definer-for Michigan and Hoke as he begins to wade deep into his fourth season in Ann Arbor.

"We talked yesterday because we gave the scouting report last night,? said Hoke. ?They understand it's the last game (vs. Notre Dame). I think they also understand that they need to play a lot better than we did a week ago because Notre Dame is a good football team and they have good players.?

No doubt, Brian Kelly has built a good program that went to the BCS title game after the 2012 season and is coming off a 9-4 season. The Irish opened this season with a resounding 48-17 win vs. Rice amid the backdrop of an academic scandal. So, ND seems focused despite the distraction that has cost Kelly some players. The Irish will be ready. Will the Wolverines? This is the first of three tough road games, with trips to Michigan State (Oct. 25) and Ohio State (Nov. 29) also on the to-do list.

Michigan has dominated the series with ND of late, winning four of the last five meetings. The lone defeat: In 2012 in South Bend, when Denard Robinson endured his infamous ?turnover game.? Still, the Wolverines haven?t done much following those wins over the Irish.

Michigan?s recent struggles have been well-documented. Hoke has seen his win total go from 11 to 8 to 7. Last year was particularly difficult to watch for Wolverines fans, as they saw a 5-0 start melt into a 2-6 finish. What in the name of Bennie Oosterbaan happened?

Well, a lot happened. Most notably, the offense struggled. The line never developed and the running game floundered. How bad was it? Michigan finished 11th in the Big Ten in rushing (125.7 ypg).

There also were grumblings of leadership issues that chipped at the core of the team. It all culminated in an ugly bowl loss to Kansas State.

Something bold had to be done. So, Hoke was bold, canning offensive coordinator Al Borges and tabbing Alabama offensive coordinator Doug Nussmeier. The early returns have been favorable, as the Wolverines clicked to the tune of 52 points, 560 yards of total offense and 350 yards rushing in the opener. Derrick Green had 170 yards rushing; De?Veon Smith had 115. But that was vs. Appalachian State. This is Notre Dame.

Under the Golden Dome.

In the shadow of Touchdown Jesus.

And it?s on ? the ? road, where Michigan has struggled under Hoke.

Hoke has taken care of business at home, going 19-2 in the Big House. But he?s just 6-8 on the road (7-11 if you include neutral site games). Great programs win on the road with consistency. And this program hasn?t been great in some time. To wit: The last time Michigan won a Big Ten championship was 2004. Since then, the Wolverines have been a tease. Will Michigan be better away from Ann Arbor in 2014?

?I don?t know how to answer that,? Michigan quarterback Devin Gardner said. ?I just know we prepare hard and the intensity we have in practice — it?s like we?re playing a road game, or (road) practice, every day.

?They put a lot of stress on us and it?s really hard to communicate when there?s loud music and things like that. That?s big thing when you go on the road, communication. That?s usually the thing that stops teams from being as successful as they want to be.?

It will be loud. But a good way to quell the raucousness is with a strong ground game. And Gardner also has to have a big game. He has tasted success vs. the Irish before. Remember last year, when he completed 21 of 33 for 294 yards and four touchdowns, and rushed for 82 yards on 13 carries and a touchdown while wearing No. 98 for the first time in honor of Tom Harmon? Gardner looked like a Heisman contender. It?s never good to peak in September. But, it went downhill from there.

Gardner looked great last week in the aforementioned 52-14 win over Appalachian State, hitting 13-for-14 passes for 173 yards and three touchdowns to kick off his senior season.

Gardner will have to be a star in addition to being a rock if Michigan wants to beat the Fighting Irish and make this a special season.

"The talent level is there,? said Hoke. ?There are guys they recruited that we recruited, there's guys we got that they recruited. I think to some degree, the talent level there is very similar. That, being as much as anything else, gives you a little bit of an idea about where we stand."

Michigan has talent. But it?s time to turn that talent into some big results in a challenging East Division. And the first big step needs to be taken on Saturday night.