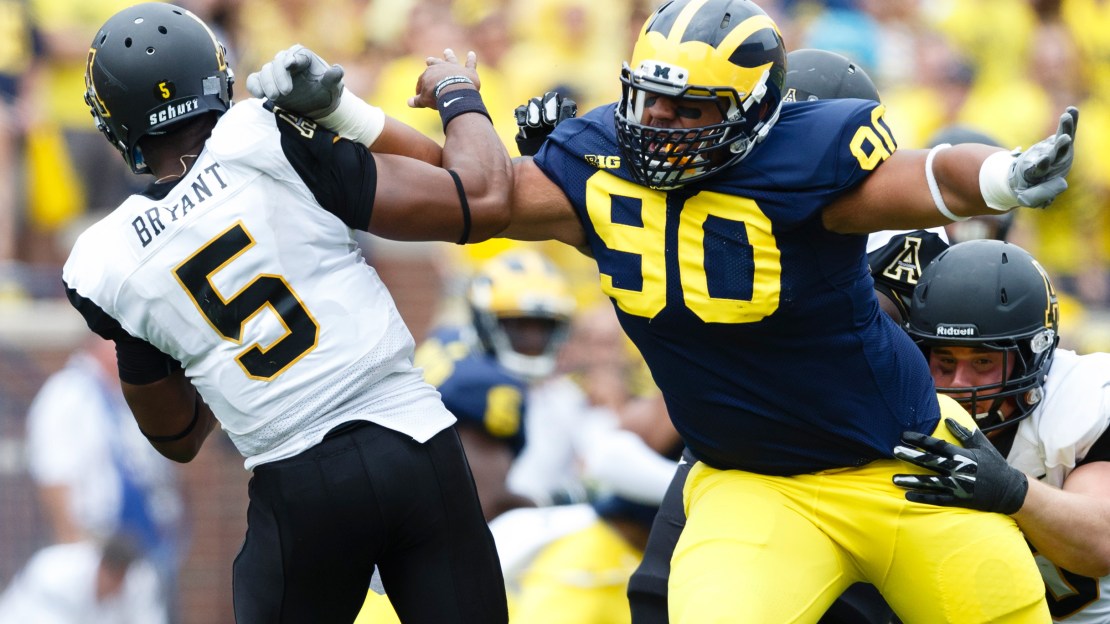 The academic scandal that has hit Notre Dame has been jarring, as five players are being held out-including three starters. But, it sounds like there?s a chance their status could change for the Michigan game. Interesting.

"We haven't made (a) change because I haven't gotten any updates on where we are in the process of that," Notre Dame coach Brian Kelly said during his availability with reporters in South Bend.

Kelly has said that if he hears what the university's final ruling is, the status of the players could change before Saturday. According to Associated Press, Notre Dame concluded its internal investigation last week, and has now passed the matter on to the university's "code and honor committee."

This could be a pretty big development.

It seems Wisconsin coach Gary Andersen has created a stir by not saying QB Joel Stave was injured and unable to play vs. LSU, playing coy all the way until announcing on Tuesday that Stave is out this week with a shoulder injury. The fact Stave apparently has been out all along and reporters weren?t told about it has hacked some off in the media.

?We?re doing everything we can to win the football game,?? the coach said. ?Having your No. 2 quarterback out … that?s not the proper time to make that announcement.??

Lee Barfknecht of Omaha.com wonders rightly so: Why the misdirection on Stave?s availability?

?As of yesterday, it was still completely unclear the direction we wanted to be able to head as far as taking Joel out of throwing at practice,?? Andersen said. ?As soon as media walks around and sees Joel not throwing, it?s going to raise eyebrows about what?s going on.??

It is a subject that been broached often: The Big Ten would be helped if it scheduled league games earlier in the schedule. I agree. Juice up this schedule.

As Tom Shatel of Omaha.com says, the SEC has it figured out. Conference games not only put all eyes on your league out of the chute, but an early loss doesn?t hurt you in the playoff chase, either. Put that winnable non-conference game in later October or November, says Shatel, when losses do knock you out. Start the season with a divisional league game-like Texas A&M at South Carolina this year.

No doubt, Christian Hackenberg has been impressive in his short stint at Penn State. Could he already be the best quarterback in school history? Honestly, it really isn?t a stretch to think so.

It?s not an illustrious list of Penn State signal-callers. The best, according to the great David Jones on Pennlive.com: Kerry Collins, Todd Blackledge, Zack Mills, Michael Robinson. See what I mean? Where does Hackenberg fit in that group? On top? I probably would put him behind Collins and Blackledge, poised to zoom by them soon, however.

Yes, the Iowa receivers looked OK in the opener, seemingly stepping up in the second half. Still, something seems to be missing.

?I love all those guys,? Rudock said. ?Whoever comes in and has a big game, whoever catches it, I?m happy.?

Urban Meyer didn?t have a lot of good things to say about the Ohio State offensive line after the win last week vs. Navy. The unit needs to do better and apparently has been solidified. There are no more co-starters on the depth chart.

These guys will be OK.

There was much rejoicing when Minnesota landed in-state RB Jeff Jones last February. Jones can't take part in team activities, including practices, this fall, but would be eligible for spring semester if he posts a 2.5 GPA this fall.

No need to remind Kyle Flood of the rugged schedule that awaits Rutgers.

Beginning Oct. 4, the Scarlet Knights will take on Michigan; at Ohio State; at Nebraska; Wisconsin. Oh, and the season ends with trips to Michigan State and Maryland. So, you can see why trying to forge a 5-0 start is a good idea.

I have been impressed from what I have seen from Rutgers. So, apparently, has been Cleveland.com?s Doug Lesmerises, the lone AP voter to put Rutgers in his Top 25.

Look, I like the Scarlet Knights. But, a Top 25 team? Right now?

Kudos to Purdue for notching a much-needed win last weekend. But Darrell Hazell is realistic. He knows there is much room for improvement in every facet of the team. This is still gonna be a long process for the Boilermakers. But, this progress should motivate people.

"I want to see more dominant play with our defensive front," said Hazell, whose team had only one sack and allowed more than 200 yards rushing to Western Michigan. "I thought they did a good job, but we needed to get to the quarterback a little bit more. We're capable of doing that. We were off just a little bit a couple of times where we had chances to affect the quarterback's throwing motion. I thought our pass lanes were probably a little bit too high up the field. So we'll correct those things. We need to tackle better, missed some on some of those big runs.

"Offensively, we had two pre-snap penalties, got to eliminate those. There are some open guys we've got to be able to hit. All in all, I thought they did a good job for a first game. We only had seven penalties and none significant."