Which injury is more worrisome: Melvin Gordon or Randy Gregory? 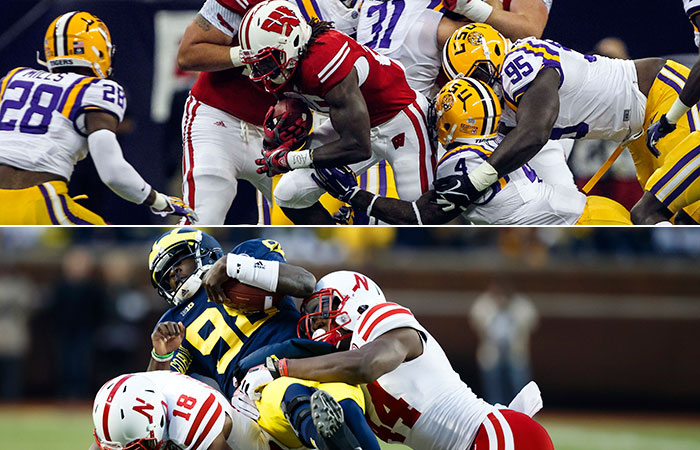 The Big Ten had a solid showing in Week 1, registering a 12-2 record. However, there were several notable injuries in the opening week, including Wisconsin running back Melvin Gordon (hip) and Nebraska defensive end Randy Gregory (left knee).

BTN.com senior writer Tom Dienhart and I debate which injury is more worrisome?

Dienhart: Gregory?s loss is bigger. He can impact a game on many levels. He is arguably the top pass rusher in the Big Ten. He also can stuff the run, knock down passes at the line and run down plays from the backside. Offenses always have to know where he is. The guy is projected by some to be a top-5 NFL draft pick. That?s all you need to know. Oh, and did I mention that the next DE up for Nebraska is a former walk-on? This Nebraska d-line lacks depth. Wisconsin has depth at RB and can absorb Gordon?s absence.

Merriman: Those are all good points, Tom, and while I agree that Wisconsin has more depth at running back than Nebraska does at defensive end, I also believe that Gordon is more valuable to his team?s Big Ten West title chances. Without Gregory, I still believe Nebraska can win the West. Without Gordon, I don?t think Wisconsin has a chance. Now, it looks like Gordon is going to be fine, which is big news for the Badgers. Gregory, on the other hand, is doubtful. So more worrisome for Week 2, you are correct in going with Gregory. But if the injuries linger, I?d be more concerned with the loss of a guy who many believe to be a legitimate Heisman Trophy candidate and potential 2,000 yard rusher this season.

Dienhart: First, I don?t think you?ll see Gordon this Saturday vs. FCS Western Illinois. The Badgers can beat the Leathernecks playing OT Rob Havenstein at RB. Save Gordon. Yes, Gordon is valuable and very good. But I think if Wisconsin had to play with Corey Clement at RB, it wouldn?t be the end of the world. Is he as explosive and fast as Gordon? No, but Clement probably is good enough to start for most Big Ten teams. It is not a massive drop from Gordon to Clement. It is a massive drop from Gregory to ? Jack Gangwish?

Merriman: Agreed. Starting Gordon this weekend against Western Illinois would not be a wise decision. Let the guy rest and heal up that hip flexor. The same goes for Gregory. But here?s my point: Nebraska can survive without its top defender. This team put up 55 points last weekend and held its opponent to just seven points. The Huskers feature one of the top running backs in the nation in Ameer Abdullah, one of the top wideouts in the Big Ten in Kenny Bell, and a quarterback who looked like a new player from what we saw last season. This offense can pick up the slack. On the flip side, Wisconsin?s offense relies so much on Gordon and the running game. Right now, the Badgers don't have a defense that can pick up the slack. Remember, two interior linemen, Konrad Zagzebski and Warren Herring, both got hurt last Saturday, and this is a defense that is replacing its entire front seven. Without Gordon, I think Wisconsin would be in a world of trouble.

Dienhart: OK. I guess we will agree to disagree. But top-level, big-time, pass-rushing defensive ends are the most valuable commodity in football. Look at the NFL Draft and NFL salaries. Look at the deal J.J. Watt just signed in Houston. Gregory is a difference maker on more levels than Gordon-and his backup is less proven and good than Gordon?s. The Badger offense won?t change much without Gordon, as Clement is VERY good. He had 547 yards rushing as a true freshman last year (8.2 ypc). Without Gregory, foes can double-team DE Greg McMullen, making the Husker defense less effective. And, a less effective Husker defense would put more pressure on a Nebraska offense that is operating with a still-unproven QB in Tommy Armstrong. This case is closed, pal.

Merriman: Tommy Armstrong is unproven, but there isn?t a quarterback in the Big Ten who is more unproven than Wisconsin?s Tanner McEvoy. With the news that Joel Stave will miss extended time with an injury, this is McEvoy?s team now, and he needs his star running back by his side for this Wisconsin offense to excel. The bottom line is that we both have pretty good arguments, but if these two teams were to play, Nebraska without Gregory and Wisconsin without Gordon, I?m taking the Huskers. Here?s to hoping that doesn?t happen and both of these guys come back healthy and better than ever. Now this case is closed. Signed, sealed and delivered.