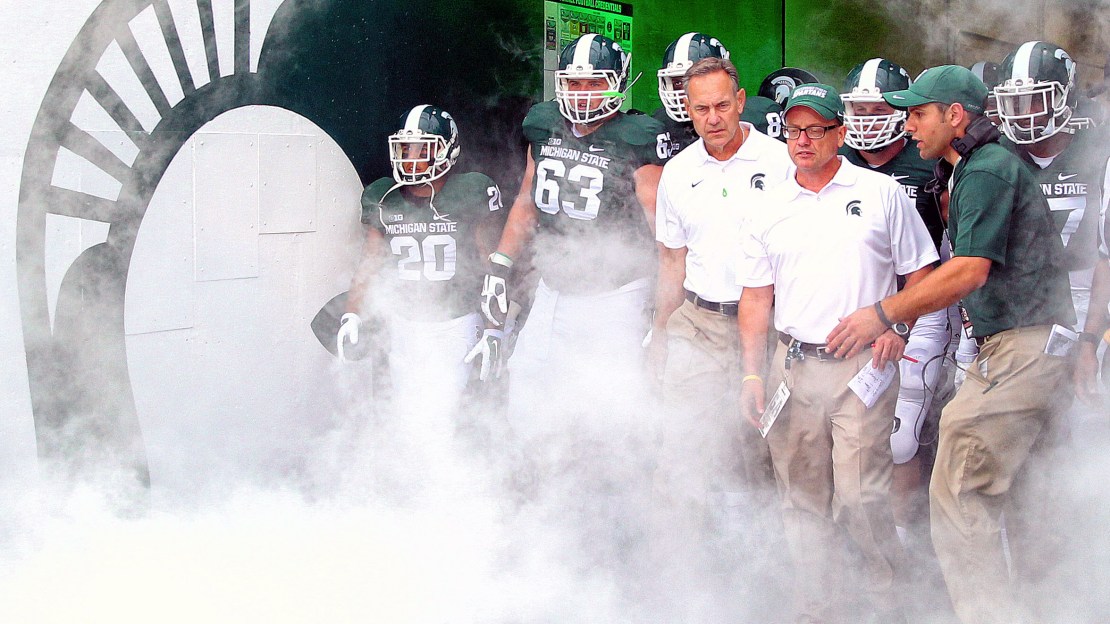 It?s Oregon week for Michigan State. The nation will be watching in what is one of the most anticipated non-conference games of the season. Return from Eugene with a victory, and the Spartans may not lose again. But Mark Dantonio is trying to play down the significance.

?I think that when you play a game like that you?ve got to make a statement that the Big Ten is here to play with any conference, any team in the country,? RB Nick Hill said. ?We?re on top of the Big Ten for a reason and we?re going to show what we can do out there in Oregon. I think it?s going to be a statement game for us, not only for our team but also for the Big Ten.?

Michigan looked like a vintage Michigan team in the opener. But that was vs. Appalachian State. Up next is a trip to Notre Dame, the last meeting between the schools in the foreseeable future.

"We want to run the ball," Michigan coach Brady Hoke said. "And to have two 100-yard rushers is a good thing. We wanted that offensive line to play together, we talked about taking them out (earlier), but they hadn't played as much together."

As expected, sophomore Erik Magnuson started at left guard, junior Jack Miller started at center and sophomore Ben Braden started at right tackle. Senior Joey Burzynski started at right guard but was replaced by sophomore Kyle Kalis in the second quarter. Left tackle Mason Cole became the first true freshman in school history to start a season-opener on the Michigan offensive line. How good is this guy gonna be?

There was lots of good in Rutgers? season-opener. One guy who stood out was end Kemoko Turay, who notched two sacks in his debut. The guy is gonna be a star. Not bad, seeing as he played just one season of prep football.

"Kemoko showed up. That was exciting," Kyle Flood said. "He's somebody that, since we recruited him, we felt like could be asset to us. He got into the quarterback a couple times. He had two sacks - that doesn't surprise me. He's a guy who could be very disruptive rushing the passer and he's got a skill set that we really haven't had here."

It took a while, but Ohio State got on track vs. Navy and won in convincing style. There was good-and there was bad. Ari Wasserman of Cleveland.com wonders if the Buckeyes have six receivers-does that really mean they have none?

Ohio State has Corey Smith, Jalin Marshall, Michael Thomas, Evan Spencer and Devin Smith. But are any of them special?

No one denies the momentum that Minnesota has in its fourth season under Jerry Kill. But the Gophers coach says better facilities are key to growth. I agree. Minnesota may have to worst facilities in the Big Ten.

"We haven't had those resources, and we've been able to take kids with length and speed and build them. We've done a good job with that," Kill has said. "But certainly we need the resources. I push very hard for that. I'm very optimistic where we're going with that."

Iowa didn?t look dominating in its win vs. Northern Iowa. Nonetheless, it was a victory. The Hawkeyes figure to get better. One of the issues on Saturday: Communication on defense. This team misses those three linebackers from last year.

There was much hand-wringing about the Penn State offensive line entering the opener vs. a veteran UCF d-line. But, the unit did just fine, considering two ex-defensive linemen are starting at guard.

The Northwestern loss to Cal was a tough one to swallow in Evanston. NU fell behind, 31-7, before a rally came up short. The defense? It will be fine, as there are plenty of athletes and talent. But the offense? What is the identity? This goes without saying: QB Trevor Siemian needs to play better.

Is this the year Indiana goes to a bowl for the first time since 2007? Maybe. Nice opening win vs. Indiana State. Watch IndyStar.com writer David Woods break it down.