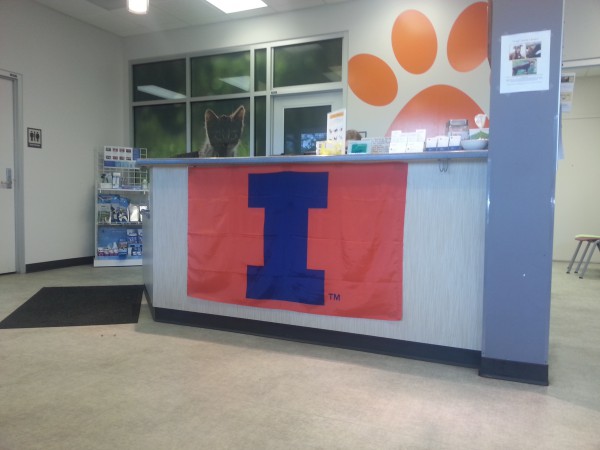 Dr. Drew Sullivan knows what it means to be excited about being part of something special at the University of Illinois.

As an undergrad and graduate student, Sullivan was a varsity cheerleader who cheered for the Illini at both the Final Four and the Rose Bowl. Both of those experiences are considered moments of pride for every Illini fan, but his latest venture excites him just as much as those great games.

In December, Sullivan was named the Medical Director at the Medical District Veterinary Clinic at Illinois, a part of the University of Illinois College of Veterinary Medicine situated in the West Loop of Chicago. Sullivan noted that, like having a great point guard or strong defense, the clinic being in a unique setting is a great advantage for the University of Illinois.

?We?re the only clinic in the state that?s affiliated with the university,? he said. ?Not many veterinary schools can offer both experiences, and it gives us a presence in Chicago."

Sullivan graduated in 2011 and began his veterinary practice in Decatur, Illinois, before moving to the clinic in Chicago. Not only are students heading back to school, but Sullivan is preparing for another year to begin as well.

?As part of their curriculum, students rotate through our clinic throughout the year,? Sullivan said. ?Champaign has a limited client base? this gives students a more ?real life? clinic experience than being on campus at a huge teaching hospital.?

?This will be my first full [school year] here It?s an exciting time to be here.?

The facility has all of the standard features of a veterinary practice: a pharmacy, lab, ultrasound and x-ray rooms as well as a specialty room. One unique feature of the office is cameras in the lights in their surgical suite, which can broadcast into both the conference room on-site and down to the campus at the University of Illinois.

?Because of the different clientele we have in Chicago, it?s a great teaching tool for us to be able to utilize both campuses,? he said.

In the general practice there are 2 full-time doctors, one emergency doctor (for which they have a local partner). They have two surgeons, an internist and an oncologist on-site. For more information about he Medical District Veterinary Clinic at Illinois, visit their website.