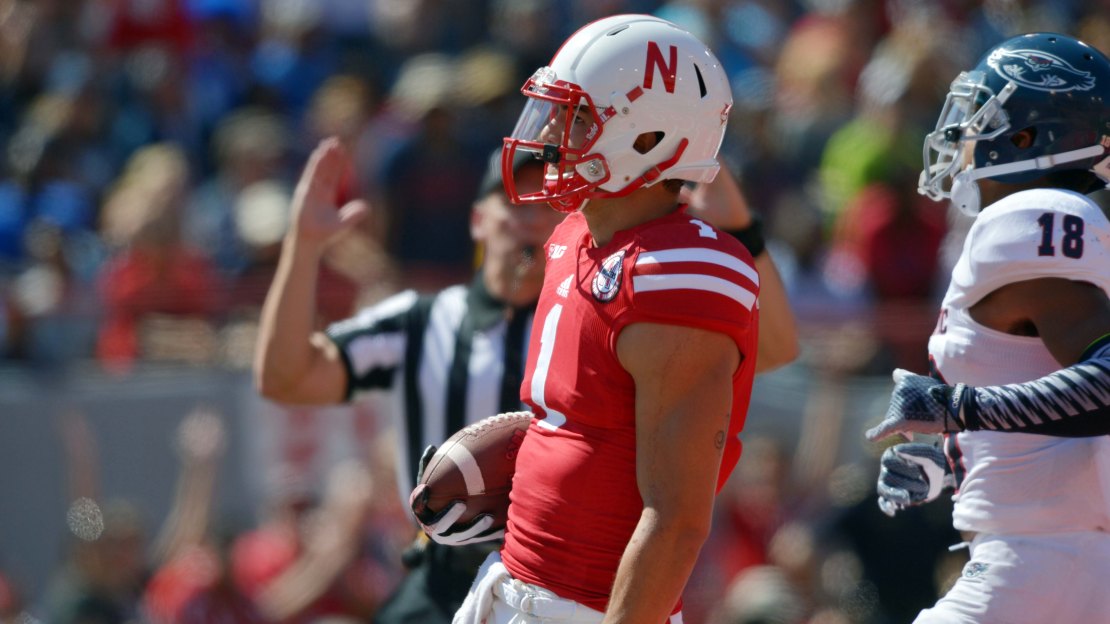 Week One is in the books. And for the most part, it was a good one for the Big Ten, which went 12-2.

The best win? Penn State?s 26-24 victory over UCF in Ireland. The toughest loss? Wisconsin?s flop vs. LSU in Houston in which the Badgers saw a 24-7 lead in the second half evaporate in a 28-24 loss to an SEC team.

Don?t read too much positive or negative into what you saw across the landscape-or don?t draw any grand conclusions. Things change a lot from week to week, especially between Weeks One and Two. The most important thing for teams obviously is to just get a win to open the season-style points don?t count. Many of these games were little more than glorified scrimmages.

Biggest surprise: I didn?t expect Penn State to beat Central Florida. But the undermanned Nittany Lions rallied late to pull out a gutsy victory in the debut for James Franklin. PSU controlled the game early until UCF changed quarterbacks and rallied. Still, the Lions found a way to win. Impressive.

Biggest disappointment: Northwestern. The Wildcats fell behind Cal, 31-7. This is a veteran NU team that some thought could be a dark horse in the Big Ten West. The Wildcats rallied but fell, 31-24. NU has lost eight of its last nine games after opening 2013 with a 4-0 mark. A game with Northern Illinois is next.

It also was tough to see Wisconsin blow a 24-7 second-half lead and lose 28-24 to LSU. It looked like the Badgers were in command until a fake punt sparked the Bayou Bengals in the third quarter. LSU never looked back.

Best play: It can only be the miraculous, stupendous, behind-the-back catch by Nebraska?s Jordan Westerkamp. How did he do that? Never mind. Just enjoy ? and marvel. Watch it at the top of the post.

"I ran a corner route and saw the ball get tipped," Westerkamp said. "I put my hands back and the ball landed perfectly. It was a crazy play."

Said Bo Pelini: "I've coached a lot of football, and I've never seen that one. Even to have the wherewithal to throw your hands back there. I always say he catches anything that's near him. He showed that right there."

Play this again: The Penn State-UCF game started slowly. But things heated up in the second half. And the finish was filled with some drama. The Knights scored a go-ahead TD with less than two minutes left. But the Nittany Lions responded with Christian Hackenberg engineering a drive to set up the game-winning 36-yard field goal by Sam Ficken in the dying seconds. Heart-stopping.

Never play this gain: Take your pick between Maryland?s 52-7 win vs. James Madison or Nebraska?s 55-7 whipping of Florida Atlantic. Think of these are ?NFL preseason games.? If you felt an intra-squad scrimmage would have been more competitive and watchable–you'd be correct.

Christian Hackenberg & Geno Lewis. The Penn State sophomore quarterback had a career day, hitting 32-of-47 passes for a school-record 454 yards in a 26-24 win open the James Franklin era. Lewis grabbed eight receptions, including a circus catch while falling down, for 173 yards – both career highs – and a touchdown in his first game post-Allen Robinson.

Devin Funchess. The Michigan wideout was a man among boys on Saturday vs. App State. Wearing No. 1, the 6-4, 230-pound Funchess caught seven passes for 95 yards with three touchdowns. Unstoppable.

Tevin Coleman. The Hoosiers rode the Indiana running back to victory, as he ran for a career-high 247 yards in a 28-10 win over Indiana State. Coleman averaged 10.7 yards per carry, as IU ran 69 times for 455 yards.

J.T. Barrett. The Ohio State redshirt freshman had his ups and downs in his first career start, as the Buckeyes pulled away from Navy in a 34-17 win. Overall, it was a success, as Barrett hit 12-of-15 passes for 226 yards with two touchdowns and an interception.

Ameer Abdullah. The Nebraska back came back to school for days like this. The nation?s leading returning rusher romped for a career-high 232 yards and a TD before leaving midway through the third quarter. The Cornhuskers finished with 498 yards rushing and a Big Ten-record 784 overall in winning the program?s 29th consecutive opener.

Tony Lippett. Remember when Michigan State had no receivers? It wasn't too long ago, but now the Spartans are loaded at the position. Lippett is the headliner, and after his four-catch, 167-yard, two-touchdown effort, he belongs in the conversation of the Big Ten's top wideout.

C.J. Brown. The Maryland senior quarterback ran for three touchdowns and threw for another in the Terrapins? 52-7 triumph over James Madison.

Rutgers. The Scarlet Knights trekked across the country to play a pass-happy Washington State team and gutted out a victory. The RU offense is physical and tough. And the team made key plays late to win the game, forcing a fumble on a punt and subsequently scoring the winning points.

Wes Lunt. In his debut as the Illinois quarterback, Lunt impressed in leading his team to a 28-17 comeback win over Youngstown State. He completed 24-of-38 passes for 285 yards with four touchdowns, hitting nine different targets. It could be a preview of things to come in an offense that will build around Lunt?s arm.

Paul James. The Rutgers running back ran for 173 yards and three scores on a career-high 29 carries, plunging in from three yards out for the game-winning score with less than four minutes to play.

Minnesota defense. This was an underrated group last year. Don?t sleep on it this season. In the opener, the Gophers pitched a shutout the first three quarters before Eastern Illinois scored some late points after the game had been decided.

Everything Michigan State. The Spartans could do no wrong in their opening 45-7 win vs. overmatched Jacksonville State. The offense notched 565 yards; the defense yielded just 244. Connor Cook played just one half, hitting 12-of-13 passes for 285 yards and three TDs. The offense was outscored by the defense two touchdowns to four through two games last year. MSU had 297 yards vs. Western Michigan and 265 vs. USF, scoring a combined 47 points and 562 yards in the opening games of 2013.

Everything Michigan. The Wolverines avenged that embarrassing loss at home to Appalachian State in 2007 with a 52-14 drumming of the Mountaineers. Michigan had 560 yards offense and allowed just 280. Derrick Green (170) and De?Veon Smith (115) led an attack that ran for 350 yards. Devin Gardner hit 13-of-14 passes for 173 yards.

Raheem Mostert and Akeem Hunt. The Purdue running back tandem excelled-and will need to do so all season for the Boilermakers to have success. Mostert ran 22 times for 146 yards; Hunt carried 15 for 78, as each scored a TD.

Melvin Gordon. The Wisconsin back did his part vs. LSU, running 16 times for 140 yards and a TD. But he wasn't used much in the second half. (I'm scratching my head.)

Jake Rudock. The Iowa quarterback showed he can win a game with his arm. He hit 31-of-41 passes for 250 yards and two touchdowns in a too-close-for-comfort 31-23 win vs. Northern Iowa.

Johnathan Aiken. First, the Rutgers safety forced a fumble on a punt that set up the winning touchdown. Second, he broke up Washington State?s last-ditch pass with 53 seconds left to seal victory.

Big Ten rep: America was watching the Wisconsin-LSU game. It was Big Ten vs. SEC, another proving ground. And the SEC won-again.

Minnesota offense. The attack still lacked explosiveness, totaling 338 yards with just 156 coming through the air compared to 409 for Eastern Illinois. The longest pass was a 35-yarder. Mitch Leidner was up and down en route to hitting 9-of-17 passes with a TD.

Purdue defense. The unit yielded 456 yards, allowing 6.2 yards per play. Most disconcerting: The Boilers were ripped for 251 yards rushing (6.8 ypc). And the pass rush was basically non-existent with just one sack en route to yielding 34 points.

Tanner McEvoy. It was just plain ugly for the Badgers quarterback, who hit 8-of-24 passes for 50 yards with zero touchdowns and two interceptions.

Indiana offense. What a difference a year makes. The Hoosiers opened 2013 by scoring 73 points. This year, Indiana tallied just 28. Still, a win is a win. The Hoosiers didn?t have to show much in their passing game to beat Indiana State. So, it was good that Indiana could work on its rushing attack. Still, just 28 points?

Illinois d-line. This unit is on the spot and needs to play better. It has much room to grow after allowing 203 yards rushing to Youngstown State.

Nebraska coffers. The Huskers paid Florida Atlantic a cool $1 million to take this beating in Lincoln. I guess it was worth it.

Iowa defense. There were worries at linebacker and safety. And, it was warranted. The Hawkeyes yielded 405 yards to Northern Iowa with 380 coming through the air. But the rush defense was stout, allowing only 25 yards on the ground on 25 carries.

All eyes will be on the Michigan State at Oregon game, one of the biggest non-conference games of the season and another chance for the Big Ten to gain some credibility. It will be a big test for an always-rugged Spartan defense that has six new starters and faces top Heisman contender Marcus Mariota and the high-flying Ducks offense. If MSU can leave Eugene with a victory, it may have a shot to go unbeaten.

Oh, and don?t forget about Michigan?s trip to Notre Dame, the last time these storied programs will meet in the foreseeable future. The Irish opted out of the last three meetings of the contract. Enjoy and savor.