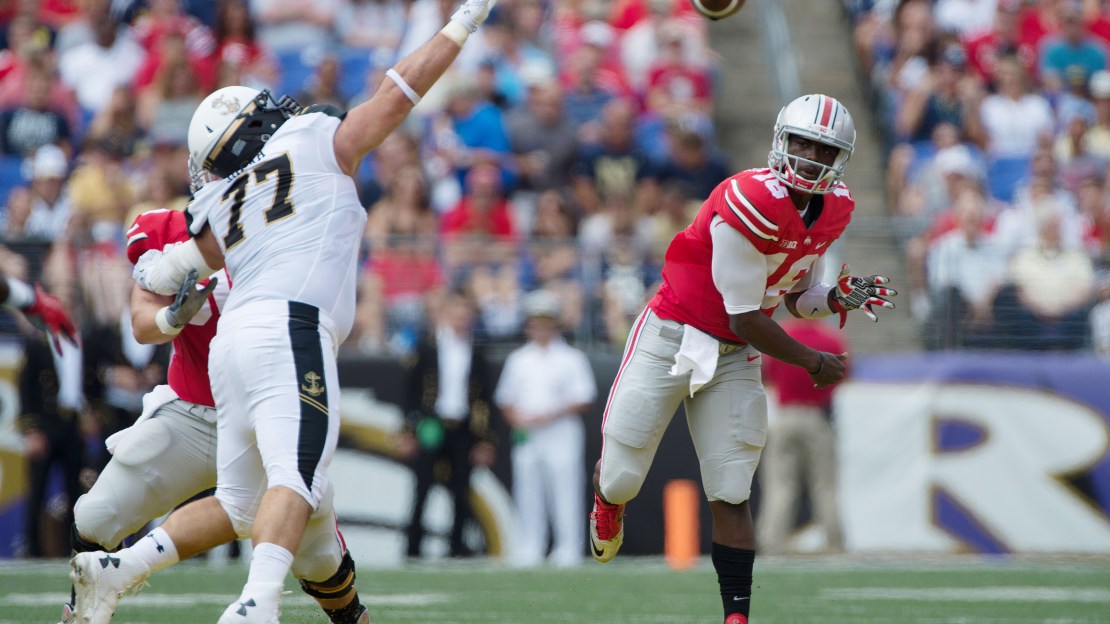 Ohio State is going to be OK. In fact, maybe this still can be a special season for the Buckeyes, even without Braxton Miller.

The early returns after today?s game vs. Navy were positive-very positive. Redshirt freshman J.T. Barrett more than acquitted himself in his first career start after being thrust into the spotlight after Miller went down with a season-ending shoulder injury earlier this month.

Barrett is only the second freshman (true or redshirt) to start an opener for the Buckeyes since 1950. He finished by hitting 12-of-15 passes for 226 yards with two touchdowns and an interception. He also showed vision and patience, completing passes to six different receivers. On top of all of that, Barrett rushed nine times for 50 yards. Pretty good.

The kid is gonna be good ? maybe very good ? maybe great. What did Urban Meyer think after Barrett led Ohio State to a 34-17 victory vs. Navy in Baltimore?

"J.T., I thought did OK,? Meyer said. ?We'll evaluate the film. Every new player is gonna have a certain amount of mistakes. We wanted to open it up a little more in the first half and we couldn't. It wasn't because of him, it was because of our offensive line. We had a couple mistakes in there - a penalty, a sack - and we just can't do that.

?Obviously with a team we have playing next we have a lot of work to do. But we'll take this win. I'm very proud of our guys for fighting through the second half and doing what they did."

That next team Meyer is referring to: Virginia Tech, which visits the Horseshoe next week. And if there is one thing the Hokies typically are known for and good at, it?s a strong defense led by renowned coordinator Bud Foster. Tech now has film on Barrett, so you can bet Foster will have some wrinkles to throw at the kid. No doubt, having Miller would help. But this is Barrett?s team. This is Barrett?s show. And, the staff has a lot to work with.

"A lot of times, great players like (Miller) will pull out of something,? said Meyer. ?I didn't physically think about (not having him) during the course of the game, but you miss great players and Braxton is a great player.?

Miller is one of the best players in the nation, a two-time Big Ten MVP who was primed to be a top Heisman contender. When news broke that Miller would be lost for the season, it seemed like those preseason national title hopes were dashed.

Could Ohio State really expect to win the Big Ten-let alone a national championship-without Miller, one of the country?s most dynamic playmakers? The answer seemed pretty simple: No.

With Miller out, Michigan State was moved to the front of the Big Ten line by most every prognosticator with a keyboard.

Why not? The Spartans are loaded, especially on offense. And while the defense is replacing six starters, it still figures to hum along under standout coordinator Pat Narduzzi. MSU looked like a buzz saw in dispatching Jacksonville State in the opener, for what it's worth.

But after what I saw today, I?m thinking it may be short-sighted to write off the Buckeyes as Big Ten favs and concede the Big Ten East race and Big Ten chase to Michigan State.

The schedule is manageable for Ohio State, especially if the Buckeyes beat Virginia Tech next week. Win there, and OSU should cruise to 8-0 as it heads to Michigan State on Nov. 8 for a huge showdown.

After the Hokies, the Buckeyes welcome Kent State and Cincinnati; travel to Maryland; play host to Rutgers; go to Penn State; welcome Illinois. The season finishes with a trip to Minnesota and home games vs. Indiana and Michigan.

A native of Wichita Falls, Texas, the 6-1, 225-pound Barrett arrived with the requisite fat scrapbook that all Ohio State recruits bring to Columbus. He was a four-star recruit, a dual-threat quarterback who had offers from the likes of LSU, Nebraska, Baylor, Ole Miss and Arizona, among others.

Now, Barrett is looking to establish himself as the leader of this Ohio State team that still may be the squad to beat in the Big Ten. No, he isn?t the runner/playmaker that Miller is. In fact, Barrett doesn?t run as well as many of the quarterbacks Meyer has had in his career. That just means a fleet of running backs led by Curtis Samuel and Ezekiel Elliott needs to carry a big load. And having a veteran receiving corps will help, too.

?Maybe he got some happy feet at time which is to be expected from a guy who is starting his first game as a redshirt freshman in that atmosphere,? said offensive coordinator Tom Herman. ?The positives are that he managed the game and had unbelievable presence on the sideline and he was accurate when we asked him to throw the ball down the field.?

Yep, this kid is going to be A-OK. And so is Ohio State.