Illinois DC Tim Banks Q&A: 'We are bigger and a bit stronger inside' 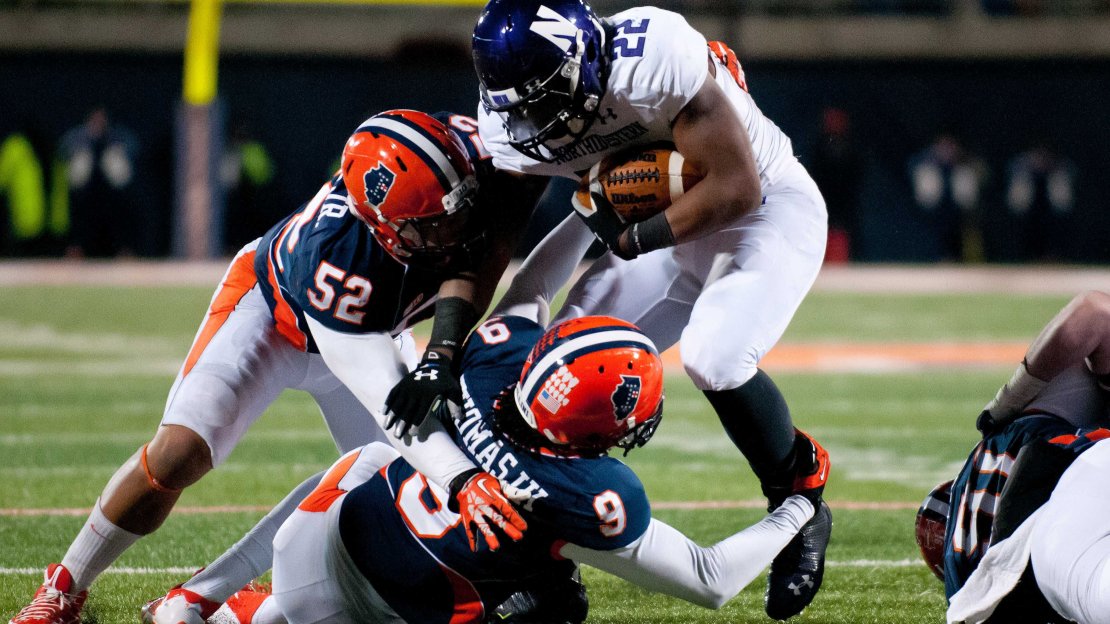 The struggles of the Illinois defense in 2013 are well-documented. But coordinator Tim Banks thinks his group will be improved. The defense will need to be if the Fighting Illini hope to play in their first bowl since 2011 as the program enters its third season under Tim Beckman.

Better depth should help Illinois. At least that?s the hope.

I caught up with Banks prior to the season opener.

Q: The defensive line is key. How does it look?
A: I am optimistic right now. We have some JC kids to help us out. Jihad Ward has great size (6-6, 295). He?s worked hard to learn the scheme and at refining his fundamentals. I?m excited about him. Dawuane Smoot has gotten so much bigger and stronger. He?s playing faster and lower and is more explosive than last year. Those guys are the backups. Kenny Nelson starts at one end. He has had a strong camp. A lot of that has to do with the competition that he has. He understands that if he doesn?t bring his "A" game every day, there is another guy in the wings who is hungry to play. The overall depth has improved which makes everyone work harder to stay in the lineup.

Q: Who is the best pass rusher? The guy who will bring the heat?
A: Smoot would be one. And Carroll Phillips has done a great job at the LEO spot. We played him at linebacker, as well, but he?ll settle back in at LEO. Paul James brings us a level of athleticism on the perimeter we didn?t not have last year. Those three guys are natural pass rushers.

Q: Will the front hold up vs. the run?
A: That will be the most critical factor. To rush the passer you have to be able to stop the run first and foremost. We are bigger and a bit stronger inside. Austin Teitsma isn?t the prototype defensive tackle you?ll see in this conference, but he works hard and has refined his skills as a technician. He is sturdier inside. We hope he holds up. And having a healthy Teko Powell has been refreshing. If they can anchor and command double-teams at tackle, I think our run defense will be greatly improved.

Q: It looks like T.J. Neal will be an anchor at linebacker, right?
A: T.J. is a very instinctive player. He isn?t going to wow you with his overall athleticism. He doesn?t really separate himself from the crowd. But when he puts the pads on, he?s always playing a step faster than other kids. He just takes great angles to the ball and sees plays develop before they happen. He has really been a pleasant surprise for us. If he continues to play at that level, we shouldn?t miss a beat inside.

Q: What about the other linebackers?
A: Earnest Thomas is playing our Star position. Any time you take guy from the backend (safety) and move him closer to the ball, your athleticism increases. That is what he has given us. He?s a very athletic Star for us. He gives us something off the edge rushing, but he?s also athletic enough to play some man coverage in the slot. So that?s really been great. He was our MVP coming out of the spring and he has done some good things in camp. We are hanging our hat on him and believing he will have a big year for us.

Q: What about Mason Monheim?
A: With T.J. inside, we moved Mason Monheim to the weak side. He didn?t bat an eye. He had started inside for two years, and now he?s being asked to learn a new position. But he?s a team guy and knows we are trying to get our best 11 on the field. If that meant him going to a new position, he was all for it. He has been a class act and one of our unsung heroes.

Q: How do corners V?Angelo Bentley and Eaton Spence look?
A: They have been in the fire. They got baptized in fire as freshmen and learned. Hopefully that experience will pay dividends for us. I don?t think they?ll be intimidated no matter who we are playing. I expect them to show up and play well because of their experience. Now they just have to do it better and at a higher level.

Q: Who is the best cover man?
A: When we first got to camp, the guy who jumped out was Eaton Spence. But if I had to say today, it would be V?Angelo Bentley. He is playing at a high level. He had a great year as a return man last year. We thought he was just OK at corner. He knew that. He knew he had things he needed to work on if he was gonna reach his dreams and goals. He has worked his tail off. Now, that work is paying off. He?s attacking the ball in flight and playing good first-level defense, getting his hands on receivers. I have been happy with him.

Q: Is safety a concern?
A: Yes, we are lacking depth. We lost a couple guys early to injuries. That has stunted our growth a bit. But we have starters back in Zane Petty and Taylor Barton. They started half of last year. They have some experience. Taylor is a big, strong kid. We have challenged him to play to his size. You won?t find many safeties bigger than him. He needs to play with the violence we expect from a 210-, 212-pound safety. He has had a solid camp. But he must make tackles in space on Saturdays like a Big Ten safety needs to do.

Q: Which is the strongest unit?
A: Good question. At every spot, we have a bit of experience. But if I had to pick one, I?d say the line because of the depth we have. It has to become depth on the field. It?s just on paper now. First group, second group, there can?t be any letdowns. I have made no secret about it. We will go as our d-line goes. Those guys have got to play well. They affect everything that we need for us to play great, weather holding their gap and creating a new line of scrimmage, making a tackle for loss or pressuring the quarterback. If those guys can do their jobs at a high level, we will be successful defensively.