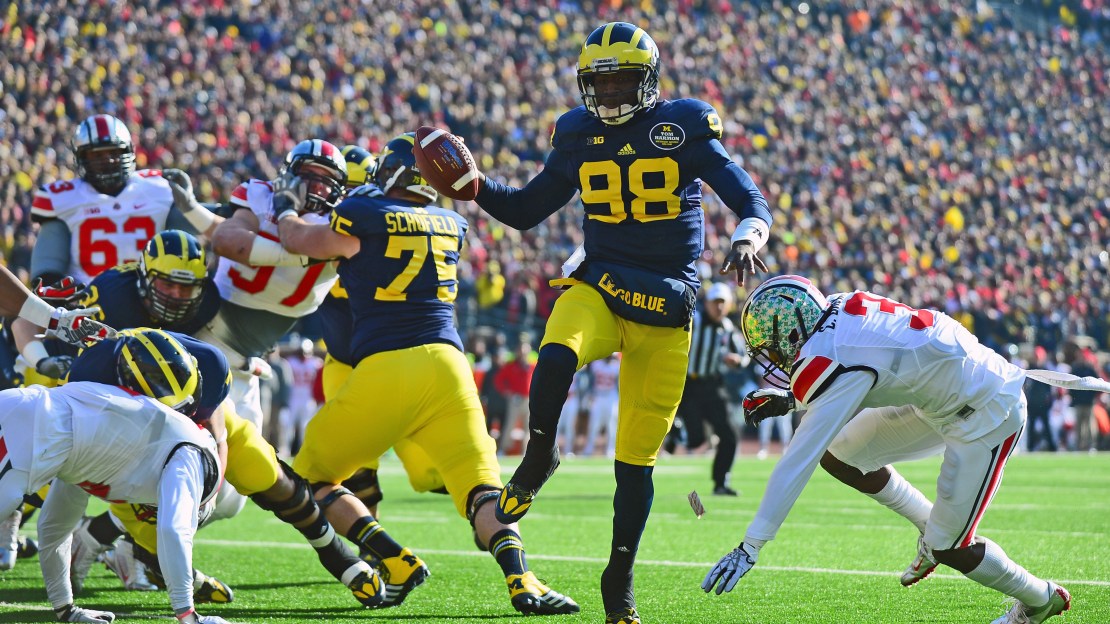 When discussing Michigan?s season, most focus on the offensive line as the key area. No doubt, the unit has a lot of pressure to perform after a lackluster effort in 2013. But quarterback Devin Gardner also has a big role. He must grasp new coordinator Doug Nussmeier?s attack-and play within the system. He can?t try to do too much.

"I was developing last year as a player and as a leader, last year was my first (full) year starting at quarterback for probably the greatest college program in the nation," Gardner said. "Coach Nuss has helped me with the idea of having more control in the huddle. Talking a lot. Speaking with everyone. Communication is so big in our offense.

"I feel like I've done a good job of embracing that and handling that."

On the subject of Michigan, it has tickets available for its opener vs. Appalachian State.

Nick Baumgardner of Mlive.com notes that Michigan has had its share of football ticket issues this offseason. Student season ticket sales dropped from around 19,000 in 2013 to around 13,000 for 2014. The school, however, doesn?t think attendance in any game will dip below 100,000 fans. Michigan has recorded attendance numbers of at least 100,000 people for 251 consecutive home games.

It?s a trend: Nebraska — which owns the national record with 333 straight sellouts — was still trying to sell tickets for its season-opener Wednesday.

Who are the key Ohio State players in the Buckeyes? game vs. Navy? Cleveland.com has tabbed LB Curtis Grant and H-back Jalin Marshall.

Good picks. But I think the entire d-line and QB T.J. Barrett are the keys. The d-line led by Joey Bosa and Michael Bennett needs to control the line and that triple-option of Navy. Barrett needs to keep mistakes limited and make a few plays with arm.

The season began last night but continues in earnest on Saturday. Northwestern will be in action taking on Cal. How could this season unfold for the Wildcats? The gang at InsideNU.com makes its predictions.

Remember when the running back spot seemingly was hexed at Iowa? Well, now it?s a big strength.

The Hawkeyes will suit up Mark Weisman, Damon Bullock, Jordan Canzeri and LeShun Daniels in the opener vs. Northern Iowa. Not bad. Plus, there are promising youngsters in Akrum Wadley and Jonathan Parker.

The o-line is a huge concern in State College, Pa., and holds a big key to the season. Left tackle Donovan Smith is the only player with any career starts up front on the Penn State o-line. If these guys can?t block, it could have serious ramifications for star QB Christian Hackenberg.

Pressure on Nate Sudfeld? Kevin Wilson says he?s placing some on the Hoosier quarterback. But not too much.

"I think he can be one of the better quarterbacks in our conference and in the game," Wilson said. I agree. Sudfeld has the tools and surrounding personnel to post some big numbers in 2014.

Sudfeld could be primed for a huge season now that Tre Roberson has transferred. I expect 3,000 yards passing-minimum-from Sudfeld.

There is a lot to like about the Maryland offense, which has the best set of wideouts in the Big Ten, is four-deep at running back and has a sixth-year quarterback. What about the line? Well, it could be better than you think.

Greg Studrawa was brought in to coach the group. And the early returns look good.

"He's a very good teacher," Maryland coach Randy Edsall said of Studrawa, who was the offensive line coach at LSU from 2007 through last year. "He's a very knowledgeable coach. The demeanor and enthusiasm in which he coaches, I think the kids really gravitate to it. He knows how to push the buttons. But he's very knowledgeable and he has a way of reaching guys and making them understand that to be successful you've got to do the fundamentals and the techniques the right way."

By the way: former Terp o-line coach Tom Brattan has landed at Illinois.