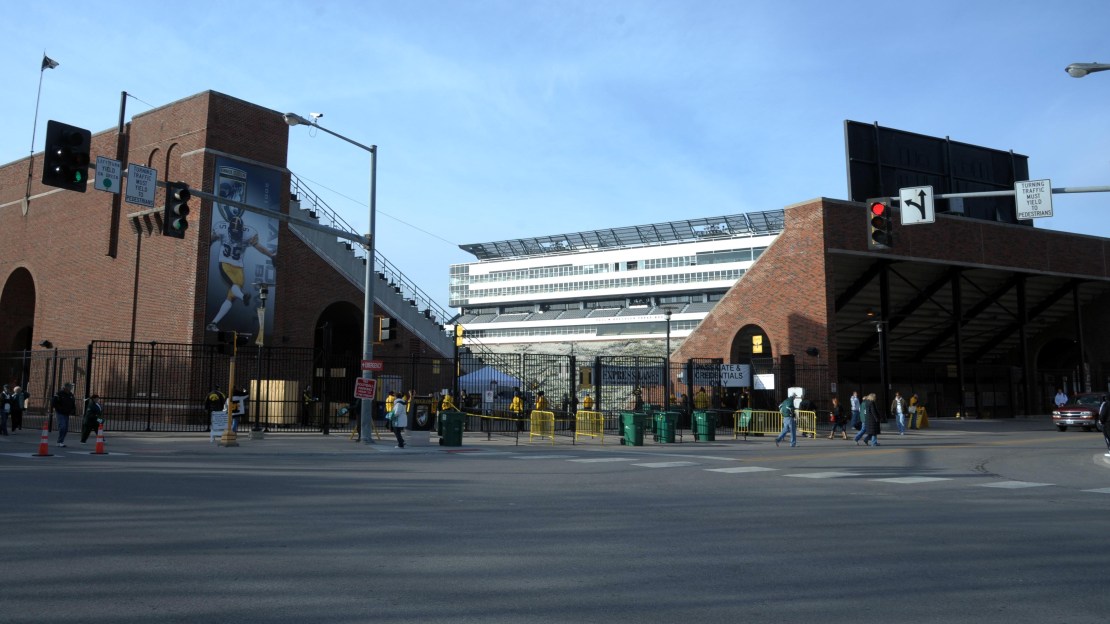 A University of Iowa professor who donned a robot costume to heckle Bill Clinton and Michele Bachmann has now set his sights on one of his school's famous quirks: the visiting team's pink locker room at Kinnick Stadium.

Kembrew McLeod is organizing what he jokingly calls a "Million Robot March" to coincide with an annual celebration Friday honoring legendary Iowa football coach Hayden Fry, who had the opposing team's locker room painted pink in 1979. McLeod wants the school to ditch the pink, which he says amounts to a school-sanctioned taunt that exudes homophobia and sexism.

Fry has said pink is a calming color meant to make Hawkeyes' opponents passive. But he also noted in his biography that it was the color of little girls' bedrooms and some considered it for sissies. The tactic has rattled some opposing coaches, with the late University of Michigan coach Bo Schembechler having student managers put white paper over the walls.

Many opposing players have shrugged off the color, with Michigan quarterback Devin Gardner recently calling it the best locker room in the conference because of its spaciousness.

Some feminists, lawyers, gay rights activists and editorial boards have criticized the gimmick over the past decade. But previous protests, including a longstanding threat of a discrimination lawsuit, haven't changed anything.

Fans have generally opposed the various efforts to get the color changed, saying it's a tradition that isn't meant to be a gender-based putdown.

McLeod, a communications studies professor, hopes his absurd approach will draw attention to the issue. He said people dressed as robots will meet on top of a hotel parking garage, and then march through FryFest, an annual event that draws up to 20,000 Hawkeye fans. They plan to hold signs and chant slogans such as, "Binary code yes! Gender binaries no!" and "Delete the pink locker rooms!"

McLeod, 43, was dubbed "Roboprofessor" after he heckled Clinton during a 2008 speech in costume. He followed that up in 2011 when Bachmann, then a Republican presidential candidate, visited an Iowa City diner. Video of McLeod dressed as a "gay robot" accusing Bachmann of being a "robophobe" and a "homophobe" – before getting booed and escorted out – quickly went viral.

McLeod said he hopes to create a similar scene Friday.

"Ten to 30 robots marching along with human allies is a visual spectacle that I think will travel far and wide," he said. "It's a serious issue, but we want to demonstrate that we are not humorless, politically correct downers."

Organizers of FryFest, which the 85-year-old former coach is expected to attend, aren't exactly thrilled.

"I've made sure the police are aware of this," said Josh Schamberger, president of the area convention and visitors' bureau. "I don't need Hayden Fry fans who have been there having fun, having some beers, getting in some sort of altercation with Kembrew's group."

McLeod said the protest will annoy fans, but that "robots come in peace." He said he knows he faces long odds in getting the university to repaint the locker room.

Indeed, University of Iowa President Sally Mason said Tuesday that repainting it isn't on her agenda.

"To tear that apart and spend the money right now to redo that just seems like a very low priority to me," she said. "Would a pink locker room have been my first choice? Probably not. But that predates me by quite a little bit."