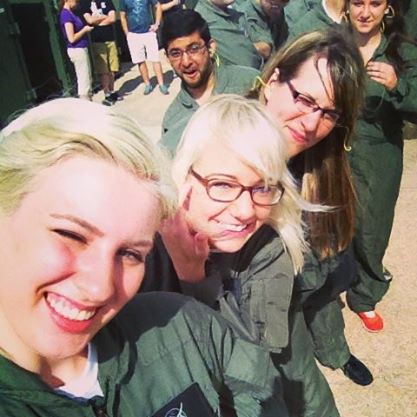 The apparel program at the University of Minnesota?s College of Design encompasses more than dresses, suits and avant-garde looks. How about influencing the next generation of NASA spacesuits?

That?s what five recent graduates tackled in a senior capstone project that led them from the classroom to a zero-gravity NASA test flight in June. Lifted from the familiarity of gravity, tumbling in balls, doing somersaults in the belly of an airplane as it would free fall - all in the name of science and design.

The all-female team participated in NASA?s highly competitive ?Microgravity U,? through the College of Design?s Wearable Technology Lab. They set out to solve a specific problem: sweaty palms.

It?s a bigger issue than most people realize. The current design of the spacesuit leaves astronauts? hands sweaty, with nowhere for the moisture to go. That can lead to fingernail delamination, where the fingernails will actually fall off.

Under the guidance of Professor Lucy Dunne, the students designed, fabricated and tested gloves made with super-absorbent polymers that would move moisture away from the astronauts? skin. The five women, Karen Fiegan, Kira Erickson, Mary Ellen Berglund, Jordyn Reich and Crystal Compton, took a functional clothing design course as juniors. After she attended a symposium at the Johnson Space Center in Houston, Fiegan connected with a mentor at NASA who let her know about Microgravity U.

She decided to take on the project for her capstone honors thesis and assembled the team of women, who all had interest in wearable technology. They were one of the few teams selected for the program, where they were given the opportunity to perform research at NASA?s facilities.

During their time in Houston, the five participated in the test flight with their design on board to collect data on its effectiveness in zero gravity.

?The experience was very crucial for them; even engineers don?t get that type of opportunity,? Dunne said.

?It?s not typical to be doing this type of research and going to work with NASA,? Fiegan said. ?It really was an amazing opportunity. [The College of Design] is 100 percent what you make of it. Opportunities like this are what you seek out and what you want to do.?

The work generated by this and the other student projects of Microgravity U will influence the direction of future NASA design and technology for years to come, Dunne said. Four of the five University of Minnesota students are going on to grad school this fall with aim of specializing in the technology and engineering of both functional and smart clothing.

For Fiegan, the experience showed her how much she enjoys working with teams and managing projects. In fact, she sees a future for herself in project management.

?It has been incredibly transformative for the next steps in the development of their careers,? Dunne said. ?I think they?re an example of what this kind of program is for.?