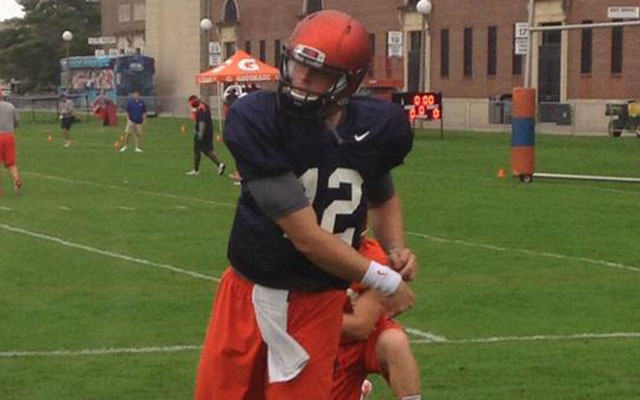 All of the analysis, all of the talk, all of the speculation, all of the conjecture ? it?s finally over. It?s time to play football. With game day finally here-we have Eastern Illinois at Minnesota along with Rutgers vs. Washington State in Seattle–I have some predictions and observations to make in a new weekly feature: ?Fourth-and-Long.?

Jabrill Peppers will be one of the nation?s most exciting newcomers. The true freshman is slated to be Michigan?s nickel back and also play some corner in base defense vs. App State. Peppers will return punts, too. The comparisons to Charles Woodson will get tedious, but just enjoy this kid?s talent and block the other stuff out.

Illinois QB Wes Lunt will pass for over 300 yards vs. FCS Youngstown State. The Fighting Illini will want to show off their new weapon. The former Oklahoma State signal-caller has a big-time arm and already probably is the top quarterback in the Big Ten West. Who am I kidding? Lunt IS the best QB in the Big Ten West. This is gonna be fun. I haven't been this excited about an Illinois QB since Jeff George.

A must win? In the opening week of the season? Yep, that?s what Purdue faces when it plays host to Western Michigan in a battle between 1-11 teams from 2013. The Boilermakers need to generate some mojo and excitement right out of the gate to energize the program.

Washington State is going to go right after Rutgers corner Justin Goodwin. Just a few days ago, he was the No. 2 running back. Now, he?s a starting corner facing a Washington State team that lives by the pass under swashbuckling Mike Leach. Oh, my!

The Florida Atlantic at Nebraska would have been a bit juicer if Carl Pelini still was coach of the Owls. Alas, the ex-Cornhuskers defensive coordinator lost his job last season. Oh, well. ? So much for the ?Pelini Bowl.?

James Franklin will do something exciting in his Penn State debut vs. UCF in Ireland. I don?t know what it will be. A trick play, perhaps? A gutsy call on fourth down? Maybe it will be just delivering a victory that some think the Nittany Lions won?t get. I know I can?t wait.

The Ohio State vs. Navy game in Baltimore won?t feature more than 20 combined passes. Each of these teams will wanna win by pounding the rock. This game could be finished in 2:30. No doubt, the Buckeyes won?t ask redshirt freshman quarterback T.J. Barrett to do too much in his debut. But he?ll have to hit at least one big/important pass. Oh, and he can expect lots of pressure.

Conversely, the Cal at Northwestern game will feature a combined 60 passes. Both of these clubs are built through the air, so the footballs will be flying in Evanston.

If Michigan State doesn?t blow the doors off Jacksonville State on Friday night in East Lansing, don?t fret. The Spartans want to keep things basic as they prep for that huge season-defining trip to Oregon next week. Mark Dantonio will channel his inner Woody Hayes in this opener.

The Appalachian State at Michigan game won?t be close. The Wolverines are still stinging from the stunning loss to the FCS program to open the 2007 season. Michigan will take care of business seven years later and have this game wrapped up by the fourth quarter-if not sooner. Still, I wouldn't have scheduled this game if I'm Michigan. Why conjure the memories?

The LSU-Wisconsin game will be the epitome of 1970s Big Ten football: three yards and a cloud of dust. Lots of physical football, and a great chance for Melvin Gordon to show that he's a legit Heisman contender. The game ultimately will be won by the team whose quarterback can hit a few big passes.

Like it or not, Wisconsin is carrying the Big Ten's flag. It's all about respect. A win over SEC power LSU would give the Big Ten a nice boost entering 2014 and be a step in changing the national narrative about the Big Ten.

The biggest blowout in the opening week? Indiana will empty the bench and cruise by Indiana State.