Best of Week 1: All eyes on LSU vs. Wisconsin 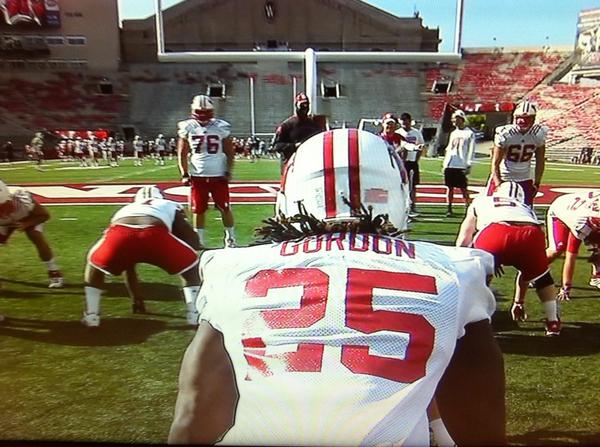 The first week of the season has arrived. And that's a beautiful thing. There are 14 games on the docket, with several tilts holding intrigue. What to watch? What to focus on? Well, we are here to help.

The headliner is Wisconsin vs. LSU in Houston. So many intriguing storylines and matchups. Keep an eye on how well massive Badgers offensive tackles Rob Havenstein and Tyler Marz deal with athletic Tigers defensive ends Danielle Hunter and Jermauria Rasco.

Other games to watch in which the Big Ten can prove something: Rutgers vs. Washington State on Thursday in Seattle, along with Cal at Northwestern, Ohio State vs. Navy in Baltimore and Penn State vs. UCF in Ireland.

And we also get Appalachian State vs. Michigan, Part II. The Mountaineers orchestrated one of the biggest upsets in recent Big Ten history by stunning the Wolverines in the 2007 season opener. Could lightning strike again? We also get Northern Iowa at Iowa. Who can forget the Hawkeyes' great escape vs. the Panthers in 2009? Exactly.

Here?s the Best of Week One:

BEST GAME: All eyes will be on LSU vs. Wisconsin at Houston?s Reliant Stadium. The contest figures to have the feel of a home game for the Bayou Bengals, who neighbor Texas. Expect a low-scoring slugfest that hearkens to 1970s Big Ten football: three yards and a cloud of dust. Each team wants to run the ball and limit the passes thrown. Who can impose their will on the other? Which quarterback can make enough plays? This is a great chance for the Big Ten to score some credibility points by knocking off a SEC power.

BEST MATCHUP: The Wisconsin linebackers vs. LSU running back Leonard Fournette. The front seven of the Badgers? defense is being overhauled. It needs to be ready coming right out of the gate, as Wisconsin will face a player in Fournette who is considered by most to be the nation?s top incoming back. He?s a 6-1, 230-pound house of power and speed. If he gains traction, the Badgers will be in trouble. Wisconsin LBs like Joe Schobert, Marcus Trotter, Derek Landisch and Vince Biegel need to be ready.

PLAYER ON THE SPOT: J.T. Barrett. The redshirt freshman Ohio State quarterback has been thrust into the spotlight with the loss of Braxton Miller to a season-ending shoulder injury. Barrett is an Urban Meyer recruit who knows how to operate the spread-option offense. Barrett needs to limit mistakes while operating what surely will be a pared-down playbook. But, he?ll have to make a few plays, no doubt, to keep the chains moving. Can he hit some key passes?

KEEP AN EYE ON: The Navy rushing game vs. the Ohio State defensive line. The Midshipmen are famous for their triple-option, which can wear down and confound opponents. But the Buckeyes? strength on defense is a monster line led by Joey Bosa and Michael Bennett. This will be fun a clash to watch-strength on strength. Great scheme vs. great talent. Oh-by-the-way: Navy has a terrific quarterback in Kennan Reynolds, who is a dark-horse Heisman contender.

BEST COORDINATOR MATCHUP: It will be fun to watch LSU defensive coordinator John Chavis match wits with Wisconsin offensive coordinator Andy Ludwig. Chavis is one of the best in the business and again will have one of the better defenses in the SEC. But the Tigers need to develop some tackles, which could make LSU vulnerable to the run. The Badgers will want to line up and run right at LSU with their big line, creating room for Melvin Gordon. Ludwig must mix in some passes with what reportedly will be a quarterback in Tanner McEvoy who would be making his first career start. McEvoy is niftier with his feet than Joel Stave, the incumbent. But can he hit enough passes to keep the Tigers honest?

BEST COACHING MATCHUP: I like Penn State?s James Franklin vs. Central Florida?s George O?Leary. Young (Franklin 42) vs. old (O?Leary 68). Franklin is one of the sport?s hottest commodities, hitting State College with a tornado of energy and enthusiasm. Plus, the guy can coach: witness his work at Vanderbilt. O?Leary is a sage coach who has built UCF into one of the top non-power-five programs, coming off a Fiesta Bowl victory.

BEST QUARTERBACK MATCHUP: Northwestern?s Trevor Siemian vs. Cal?s Jared Goff. Siemian takes over for Kain Colter, but he has plenty of experience. And he?s a better passer than Colter. He has hit almost 60 percent of his career passes for 3,717 yards with 20 touchdowns and 13 picks. And the NU offense figures to be built around the pass. Goff was inserted into the starting lineup as a true freshman last year, earning honorable mention All-Pac-12 honors when he set Cal single-season records for passing yards (3,508), passes completed (320), passes attempted (531), total offense (3,446) and total plays (590). He?s the triggerman for a Golden Bears offense that will put up points under the leadership of Sonny Dykes. The kid is gonna be really good.