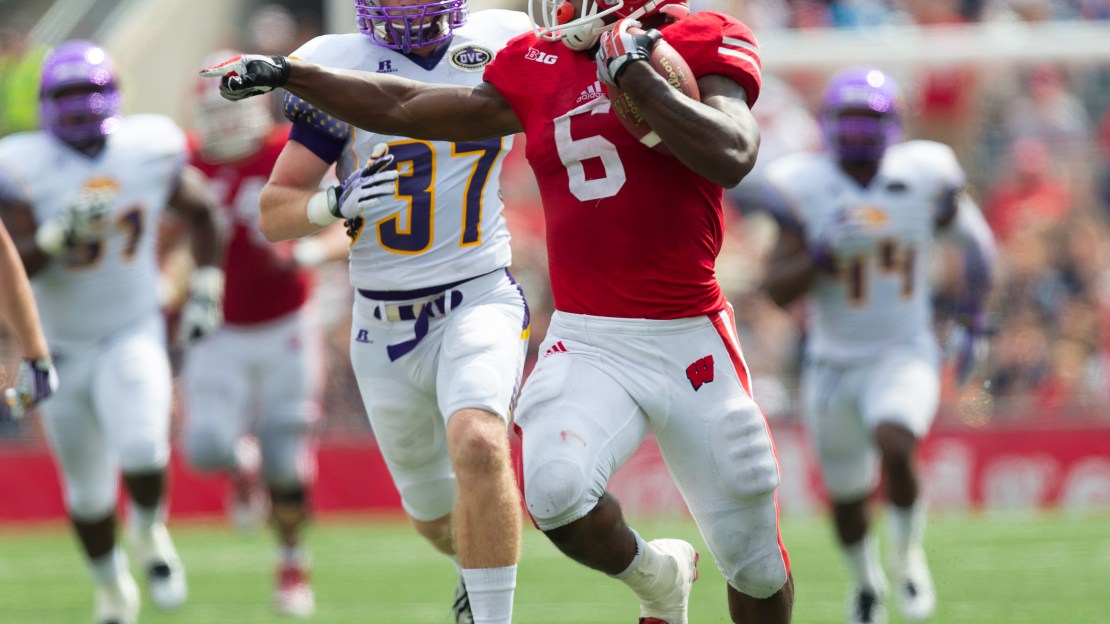 We are just days away from the start of the Big Ten season. The campaign kicks off with 14 games–two on Thursday, one on Friday and 11 on Saturday.

All eyes are on Houston, where Wisconsin takes on LSU. Each team has big holes to fill. The Bayou Bengals lost nine players in the NFL draft, more than any other school in the nation. The offense is breaking in several key new starters, including quarterback. Guys like QB Zach Mettenberger, RB Jeremy Hill and WRs Odell Beckham and Jarvis Landry are gone from a team that ended last season by beating Iowa in a bowl.

The Badgers have their own hurdles to overcome, looking to stabilize at quarterback and get a rebuilt defensive front seven up to speed. Bottom line: This is a great chance for Wisconsin to score some big-time credibility points by beating a top SEC squad. It's Michigan State's turn next week when it goes to Oregon.

Here is my ranking of this week?s games.

1. Wisconsin vs. LSU at Houston. A rebuilt Wisconsin front seven will be put to the test vs. a physical LSU team that wants to run downhill as it breaks in a new quarterback. Expect a low-scoring game-a slugfest. First team to 21 may win.

2. Ohio State vs. Navy at Baltimore. Life without Braxton Miller begins. He won?t be needed to subdue an always-pesky Midshipmen squad. How will the Ohio State offense look? The good news: The Buckeye defense matchups with the strength of Navy: running the ball. The OSU d-line is killer.

3. Penn State vs. Central Florida at Dublin, Ireland. The volcano in Iceland won?t stop this game. The Knights waded into State College and beat the Nittany Lions last year. QB Blake Bortles is gone, but UCF still has more talent than Penn State. And that may be enough to spoil the debut of James Franklin.

4. Cal at Northwestern. The Wildcats won in Berkeley last season. The Golden Bears will test the NU pass defense with pass after pass; the Wildcats figure to pass a lot, too. Northwestern needs a good start to erase a tumultuous offseason. Can?t wait to watch the postgame handshake between Sonny Dykes and Pat Fitzgerald.

5. Rutgers vs. Washington State at Seattle. Is the Scarlet Knights? iffy secondary ready for Mike Leach and his pass first, pass second and pass third offense? Wazzu has its own issues on defense. What?s it all mean? This could be a fun shootout to watch.

6. Northern Iowa at Iowa (Watch on BTN2Go). The Panthers are a dangerous team, loaded with Iowa kids who weren?t recruited by the Hawkeyes. No doubt, Iowa fans recall the 17-16 escape in 2009 vs. UNI. This one could be close, too.

7. Appalachian State at Michigan. A juicy storyline, one of the best of the opening week. This is the Wolverines? chance to exorcise the demons of 2007, when they got stunned by this FCS program in the Big House. Michigan can?t just beat App State; it needs to whip it.

8. Western Michigan at Purdue. Each of these teams won one game last season; and each surely thinks it can win this game. You hate to call a season opener a ?must win,? but that?s what it may be for the Boilermakers. Wins may be difficult to come by. Purdue needs this one.

9. Youngstown State at Illinois. Former Fighting Illini o-line coach Eric Wolford has a strong program that will push Illinois before succumbing in the second half. A big Penguin o-line will be a nice test for the Illini defensive front. Can?t wait to see new Illinois QB Wes Lunt. Will he throw for over 300 yards?

11. Florida Atlantic at Nebraska. The Owls were coached by Bo Pelini?s brother, Carl. But he lost his job. Still, this is a nice tune-up for the Cornhuskers, who could use a blowout to boost confidence before the lifting gets heavy in non-con action vs. Fresno State and Miami (Fla.).

12. James Madison at Maryland (Watch on BTN2Go). This will be a nice test for a Terrapins? squad that could be primed for a big season. JMU is coached by former Ohio State defensive coordinator Everett Withers.

13. Indiana State at Indiana. The Hoosiers scored 73 points on the Sycamores last year; they may do it again. Time to empty the bench.

14. Jacksonville State at Michigan State (Watch on BTN2Go). David, meet Goliath. This time, Goliath wins. The Gamecocks have a dynamic offense that could make this game interesting for a quarter. The Spartans? defense will need this test a week before going to Oregon.