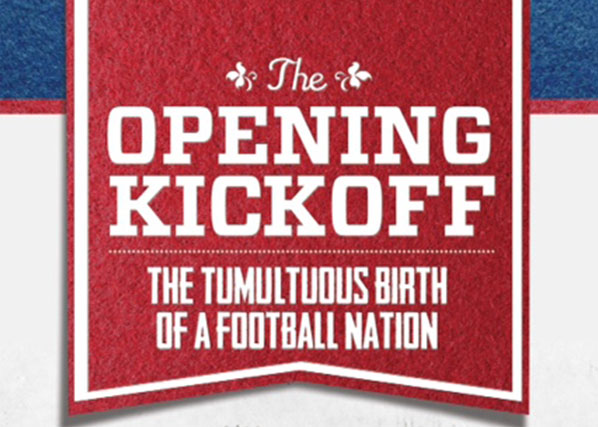 Hold a mirror up to college football?s past and you?ll see today. The similarities are striking. Just ask Dave Revsine.

Revsine has authored a smart, well-written and rigorously researched book about the sport called ?The Opening Kickoff? that peels back the modern-day veneer of the sport and examines a leather-helmeted past that looks strikingly similar to the slick game played today in multi-million-dollar stadiums that seat over 100,000. The grandeur of the black-and-white era loomed large-as did some troubling issues. Sound familiar?

?We often think that the times we live in are so unique, like no one ever has had these issues, that we are in uncharted territory,? said Revsine. ?My argument would be that there are very few instances in which we are (in uncharted territory). I was a history major in college, and part of what interested me was this idea of understanding the current day better (through the study of history). History gives you a lens. We see people back then had the same challenges and got the same excitement out of the game that we have today. That?s really instructive.?

This book was a passion for Revsine, who has been lead host of the Big Ten Network since its inception in 2007. College football is in his blood. A Northwestern grad and son of a NU professor, Revsine grew up watching and attending Big Ten games in what was then Dyche Stadium in Evanston, Ill. So, Revsine?s breadth and depth of knowledge of the Big Ten and college football is far-reaching. I caught up with Revsine (@BTNDaveRevsine on Twitter) to discuss his book.

Q: What was the inspiration for the book?

A: I stumbled upon the story of Pat O?Dea who played at Wisconsin in the 1890s. I had known a bit about him, that he was a great player. But I didn?t know his full story. It was amazing. It blew me away. Not just as a player, but on the impact he had on college football in our region and in helping to build credibility for this part of the country.

The East was seen as preeminent, as far as college football. O?Dea was a huge part of the Midwest becoming more competitive. And he had this bizarre life story. So, I was sucked in by him initially. And I first thought I?d write his story. But as I read more about him and began to understand the context of the times, it became apparent to me that there was a bigger story to be told. All of these things that happened to him and the other players of the time were so similar. All the issues were the same as today. The scope and scale obviously are different. All of the things we think about being unique to college football in this day and age, the origins of it were in this 1890-1915 time period. To really get what?s happening today and understand how we got where we are in a positive and negative way, you need to be able to understand that time.

A: The opening quote in the book is ?there is nothing new under the sun,? a Biblical quote. That?s exactly what it is. This idea that all of the things going on today in the sport, you can trace to this time. You can get very specific on it, the name, image, likeness stuff, the O?Bannon stuff, all of the amateurism issues. I show the antecedents of that. The issues around finances of the game, the injury crisis we are going through with concussions, the recruiting scandals ? all of those negative things.

Also the positive things, the energy (college football) builds on campus, the excitement of everyone associating and rallying around the team. It?s the brand name in a lot of ways for universities and keeps people in touch with their schools years after they leave campus. The media coverage ? and it?s fun to follow the games which are a spectacle and big deal. All of that started then, too. That really caught me off guard.

I never knew how big of a deal games were then. I had this notion there were a couple hundred fans at games, players took a break from reciting Shakespeare to go out and kick the ball around a bit and that was the end of it. But games were a huge deal in terms of the scope and scale of the day, very similar to what we see today.

Q: There is the old adage: If we don?t learn from history, we are doomed to repeat it. See any of that in what you researched and wrote?

A: I think we can learn from the sense that we have been there before, particularly with the injury crisis. It?s interesting to read about what happened in 1905 and how President Roosevelt intervened in the game and helped set it in on a direction to save itself. I would disagree strongly with the notion that he saved the game, which some have put forward. But he helped make it clear that it needed to be saved and sent a message that something had to be done.

That is what I worry about the most with the game, the injuries and concussions. It?s an area where we certainly could learn (from the past). Part of what they did was they changed the rules dramatically. People say you can?t change the rules, the game is good as it is; you change the fundamental nature of the game (if you change the rules). And that?s exactly what they did then. They changed the fundamental nature of the game. You know what? Some would argue they got a better game out of it. I do think that?s an area we can learn from history.

Q: What did you learn about formation of the Big Ten?

A: A big part of the book is the formation of the Big Ten. It was basically founded on eligibility, on trying to give some sort of order as to who should play these games, who should be able to participate for these schools.

One of the examples I give is from 1893, when of Michigan?s 11 starters, seven weren?t enrolled in school. You look at that on its face and say it was preposterous. But no one thought twice about it. No one thought about who should be able to participate. The schools were like-minded in this idea that they needed rules, so they came together to from these eligibility rules. Then, they almost instantly disregarded them when they became inconvenient. I use Pat O?Dea as an example. He should have been ineligible his first year at Wisconsin. But the school disregarded rules it had just agreed to months before saying it didn?t matter, he will play. Amos Alonzo Stagg at Chicago consistently said he would do what was convenient for him. And when the rules weren?t, he didn?t follow them. When they were in his favor, he did.

The idea behind the formation of the Big Ten was: How can everyone play on an even playing field? It seems like such an obvious notion now. But they were the first ones to do it. They were the first to say: We need to figure out a way to have a uniform set of rules. But they struggled with it.

And they struggled enforcing the rules, too. People were constantly looking to operate on the margin, in the gray area, the entire time. You talk about learning from history, that?s no different from the legal world, the financial world or whatever it is. Whenever there is an opportunity to operate in the gray, there will be some people who try to do that. College football is one example of that. I don?t think it?s any better or worse than any other example you point to.

Q: You grew up as a child of the Big Ten. How did that lead to the writing of this book?

A: I grew up going to Northwestern games. My father was a professor there. He also taught at Illinois and Wisconsin, too. They were so bad in those days. I was at a game one time during their 34-game losing streak, and they were getting hammered. At the game, I?m flipping through the program and I notice the longest field goal kicked by a Northwestern opponent was 62 yards by Pat O?Dea on a drop kick in 1898. I asked my dad what a drop kick was. He was so excited not to talk about the game, he told me about it and I never gave it another thought.

In 2010, I stumbled upon a story about O?Dea and recalled learning about him earlier with my dad. I began to read about him and became transfixed at his amazing story.

I thought maybe we could do a BTN story on him. But it?s difficult to do with a guy who played so long ago, and there was no video, no one to interview. It isn?t a great television story. I felt it was better written. So, I started down the road. I began the book in 2010, so it was a four-year project.

There is something intensely personal about your writing, how you put yourself out there and the permanence of it. It has been nice to see a subsection of people who enjoy it.

Editor's note: You can order Revsine?s book "The Opening Kickoff" from Amazon.com