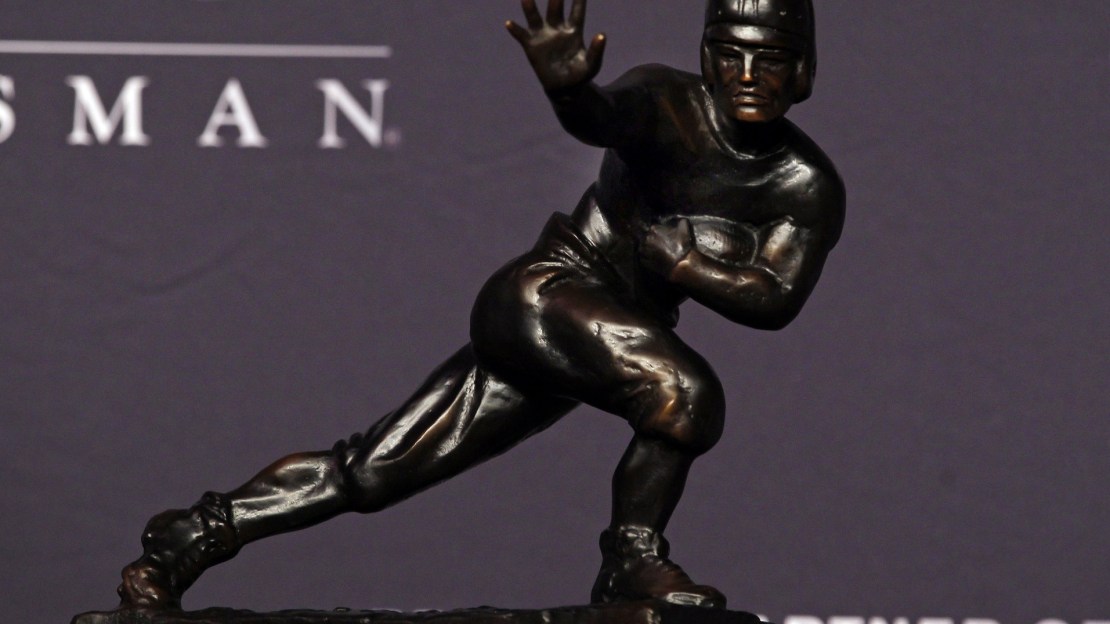 With the season about to start, the Heisman talk is beginning to heat up. No doubt, defending champ Jameis Winston of Florida State is everyone?s favorite. But a few Big Ten players made the list of Mike Huguenin of NFL.com. Who is the top Big Ten contender with Braxton Miller out? Wisconsin RB Melvin Gordon.

I just wonder if he?ll get enough carries to build a good enough resume. And will the Badgers have a passing game to keep defenses from ganging up on Gordon?

Any discussion of Iowa having the stuff to be Big Ten West champs includes a discussion of the receiving corps: It has to step and make some plays down field to open room for what should be a strong ground game. The good news: There are some promising prospects.

And then there?s the schedule: It?s seemingly built for success. But the bye weeks don?t come at opportune times.

Rick Brown of HawkCentral.com notes that the first bye comes after the fifth game of the season, the Sept. 27 league opener at Purdue. Then, after hosting Indiana and playing at Maryland, Iowa is off again before playing on the final five weeks of the regular season. It?s a strange schedule, too. Iowa will play just one home game between Sept. 13 and Nov. 1.

Chris Streveler is the No. 2 quarterback at Minnesota. The kid is a good athlete who can run and pass, cut from the same cloth as some of Jerry Kill?s Northern Illinois? signal-callers.

But the Golden Gophers need to hope starter Mitch Leidner stays healthy, as Streveler is a green horn. If he is forced to take over, things could get interesting.

This is pretty cool: A look at the evolution of Spartan Stadium through photos.

Michigan released its depth chart. No huge shocks, as that oh-so-critical offensive line remains unsettled. I guess I was a bit surprised to see Derrick Green No. 1 at tailback. Here is video of Brady Hoke breaking it down.

Ari Wasserman of Cleveland.com has made his pick for the Big Ten title game: Michigan State vs. Wisconsin.

I find it interesting that he has Penn State going 10-2. Ten-and-two! As for Wisconsin, I just don?t see why the Badgers are the pick in the West with questions at quarterback, wideout and on defense.

Penn State has one of the more difficult season openers among Big Ten teams, traveling around the globe to Ireland to play a good UCF team in what essentially is a de facto bowl game.

The good news for PSU: The Knights are breaking in a new quarterback behind a sketchy line. Still, how will the Nittany Lions? questionable o-line perform?

When Lee Barfknecht of Omaha.com writes, I read. And he has a piece on Omaha.com that looks at Nebraska?s 2014 prospects. And, he doesn?t seem too enthused.

I guess I can understand Barfknecht?s trepidation. Still, there is a lot to like about Bo Pelini?s seventh Huskers? teams-beginning with the defense.

There are few players who intrigue me more than Northwestern DE Ifeadi Odenigbo. Is this the year he breaks out?

This story includes a great description of Odenigbo?s best pass-rushing move. Good stuff. This guy needs to play well for the Wildcats to get back on track. The program rarely has athletes on defense of this ilk.