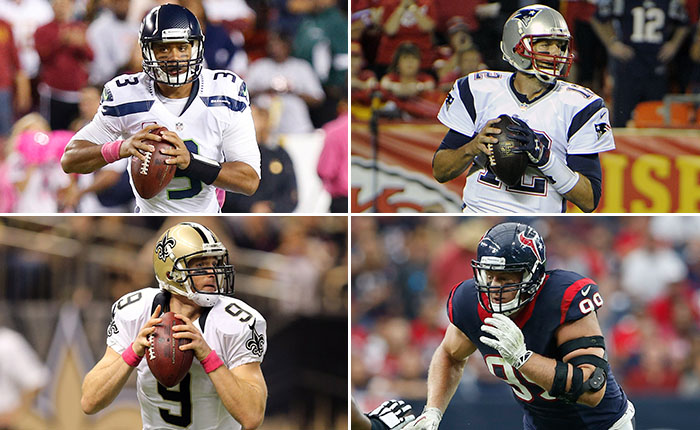 Football season is in full-force, which means that player jerseys are flying off the shelves like donuts at the local cider mill.

Dick's Sporting Goods recently tweeted a list of the most popular team in each U.S state based on NFL jerseys sales at their store.

That got me thinking about the most popular jerseys in the NFL and where ex-Big Ten standouts land on the list. There are four former Big Ten players among the top 25 best-selling jerseys, from April 1 to July 17, 2014, according to the NFL apparel store.

My thoughts: I am slightly surprised Wilson has more jerseys sold than the likes of Peyton Manning (No. 3) and Aaron Rodgers (No. 9), but that's a credit to the Wilson, the Seahawks, and their outstanding fans. Brady and Brees ranking in the top 10 is no surprise. The former Wolverine and Boliermaker will go down as two of the best quarterbacks to ever play the game. Watt is one of, if not, the top defenders in the NFL, so he's no surprise. If anything, you'd think Watt would be higher on the list, ahead of the likes of Blake Bortles (No. 18), Ryan Tannehill (No 19) and Earl Thomas III (No. 20).