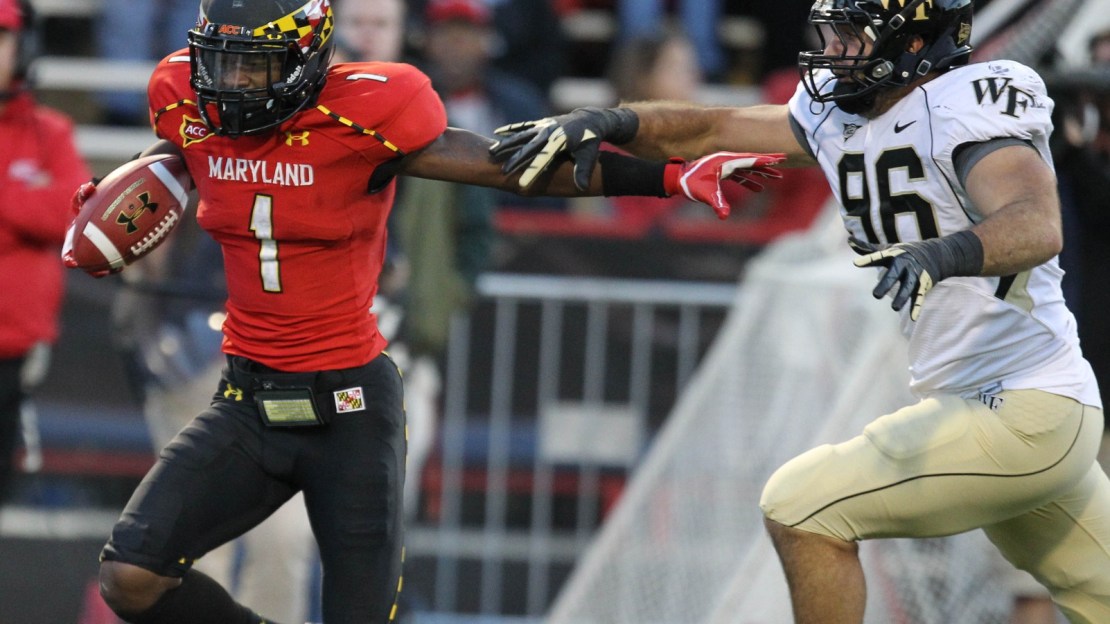 Is there a better wideout in the Big Ten than Maryland?s Stefon Diggs? Probably not. The guy is a stud coming off a broken leg that ruined his 2013. Check this out: Ex-Terp and current Ravens receiver Torrey Smith has called Diggs the most naturally gifted receiver ever to play at Maryland. But the coaches would like to see him become more of a student.

"I still think he can be as good as he wants to be," Maryland coach Randy Edsall said. "Everybody's putting all of this on him, but he hasn't even come close to scratching the surface of how good he can be if he wants to go out there each and every day and work hard and spend the time in the film room and prepare. If he does that, he can be outstanding."

Rutgers is one of the first Big Ten teams to get started, playing vs. Washington State in Seattle on Thursday. And, the pass-happy Cougars will put a lot of pressure on Rutgers, which has big issues in the secondary.

Not only does Wazzu bring back its top eight receivers from 2013, but just five FBS teams return more pass-catching depth.

Nebraska kicks off this Saturday vs. Florida Atlantic. I am like many people who think this could be a special season in Lincoln. But Tom Shatel of Omaha.com has some reservations. He thinks all of the recent Huskers? seasons run together, a ?blur of promise, hope and reality. And, largely, mediocrity.? Hard to argue with any of that.

Still, this season could be different. Really. And it begins with a much looser Bo Pelini-in addition to this being one of Pelini?s most talented teams.

My affinity for Iowa is well-documented. But the Hawkeyes have some questions. A big one is a receiving corps that must develop more playmakers. Iowa hasn?t had a consensus All-American receiver since Tim Dwight in 1997. The Hawkeyes don?t need an All-American at wideout; they just need a few deep threats to give this attack balance.

?That?s the culture around here, run first,? receiver Damond Powell told HawkCentral.com. ?We?re just trying to see what we can do as far as the passing game, switch it up.?

As Penn State preps to open the season vs. UCF in Ireland, it continues to be hounded by questions on the offensive line.

The great Bob Flounders of Pennlive.com notes that the Lions lost three starters on the line, including first-team All-Big Ten guard John Urschel. And solid returning starter Miles Dieffenbach might be done for the year after suffering an ACL injury in the spring. Left tackle Donovan Smith is an NFL prospect and at least PSU has someone it can trust to protect Christian Hackenberg's blind side. Still, I worry about ?Hack?s? long-term viability. It could be a trying year for the Nittany Lions.

Big season for Michigan. BIG season. What to expect? It?s anyone?s guess. Even Mlive.com?s Nick Baumgardner is vexed on what to anticipate.

An inability to beat good teams on the road has been an issue under Brady Hoke. Poor offensive line play is another. But I love the defense and skill players on offense. So, there?s enough to make this a bounce-back season for Michigan. But I wonder how the Wolverines will do dealing with adversity.

Northwestern is an interesting team that appears capable of some good things after a flop in 2013. The gang at InsideNU.com asks: What is the Wildcats? most important game?

I say it?s the home game vs. the Huskers in what has been a wild series. Need to protect the home turf.

The great Mike Griffith of Mlive.com has 10 predictions for the Michigan State season.

No. 2 is interesting: Griffith predicts that the Spartans will beat Oregon. No doubt, that would be huge. And it may be a must-win if MSU wants to make the playoffs.

Me? I think they?ll make it.