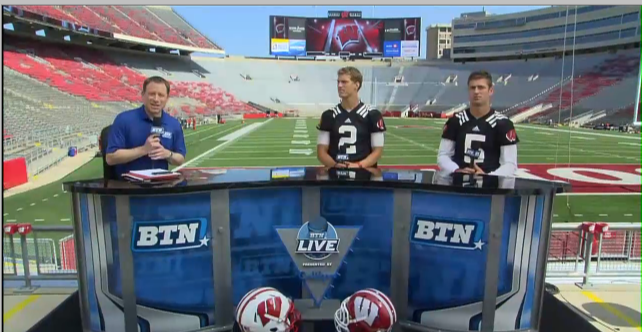 I have to say: I was a bit shocked to see this report that Tanner McEvoy has beaten out Joel Stave for the starting quarterback job at Wisconsin. This decision surprises, unlike the other quarterback competitions this fall that saw Danny Etling win the job at Purdue, Gary Nova prevail at Rutgers and Wes Lunt emerge at Illinois.

McEvoy to start at QB? Mr @jaypo1961 broke the story, he joins us to explain why the new starter on @BTNLive 5pm CT

I know McEvoy is a better fit for what Gary Andersen wants to do on offense than Stave. McEvoy is a better athlete who can run some option and operate from some spread sets. Stave? He?s more of a traditional drop-back signal caller who lacks mobility.

Still, I felt Andersen would tab the 6-5, 220-pound Stave to retain his job after he started all 13 games in 2013 as a sophomore and has a 13-6 career record. This is an offense that needs to develop some passing downfield to create room for a strong rushing attack led by Melvin Gordon.

McEvoy? He arrived from a JC in the summer of 2013 and subsequently moved to receiver before landing at safety. He played 10 games in the secondary last season. If this guy was such a promising quarterback, why move him last year?

Regardless, the 6-6, 222-pound junior is the Badgers' starter. And his first test will be a big one in the season opener Aug. 30 vs. LSU in Houston, as Andersen begins his second season in Madison as the favorite in the Big Ten West.

But don't be shocked if Stave seems some action. The coaches have said all along that the quarterback who doesn't win the job still will play, so we'll still see some of Stave. But how much?