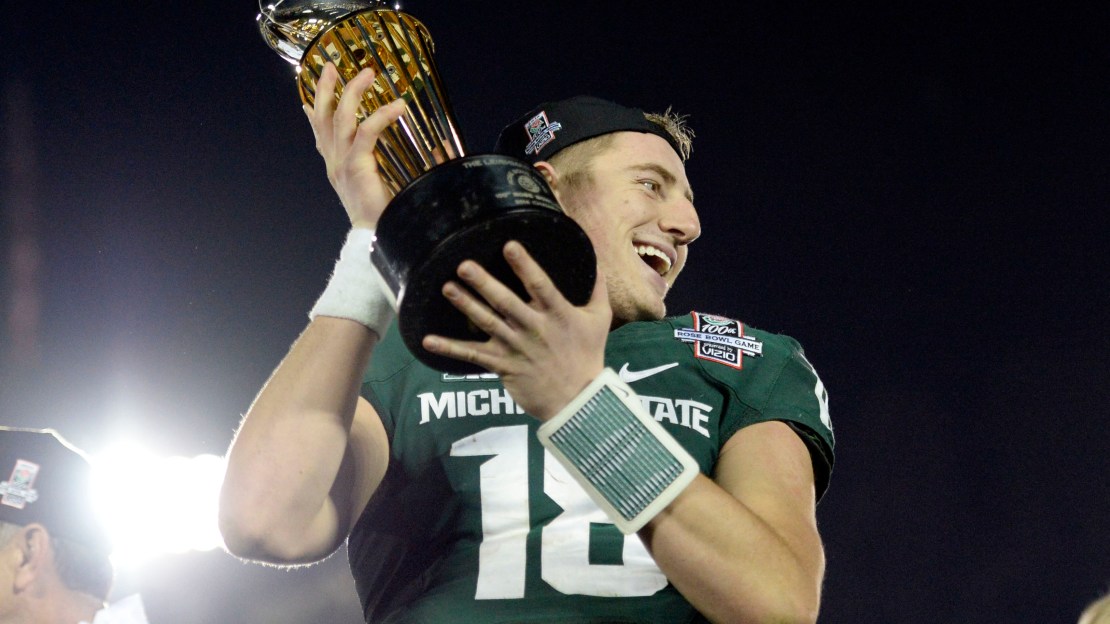 Ladies and gentlemen, we have our first upset of the season: Michigan State QB Connor Cook was not voted a team captain. Cook, of course, was the MVP of the Big Ten title game and Rose Bowl Game.

"He leads by the nature of his position," Michigan State coach Mark Dantonio told Mlive.com. ?All of our quarterbacks, all three of them, are good leaders, and Connor does an outstanding job and does a great job on the field."

This will be an interesting season at Michigan. It looks like a true freshman could start at left offensive tackle-Mason Cole. Seems incredible this could happen at a place like Michigan. Nick Baumgardner of Mlive.com says Michigan's only started five true freshman offensive linemen since first-year players became NCAA eligible during the 1972-73 academic year.

And none of those guys earned starts at left tackle. And the hype/ buzz surrounding another true freshman (Jabrill Peppers) continues to grow. What role could he play? Looks like he?ll start at corner-and be a nickel guy, too.

I?m amazed this team is still this young as it enters its fourth season under Brady Hoke.

This is a bit concerning: Rutgers has moved RB Justin Goodwin to cornerback-and he?s a starter, as injuries have hit an already thin area. His coverage skills will be put to the test in the opener next week when the Scarlet Knights take on pass-happy Washington State. Good luck.

"At first I was kind of surprised but whatever he needs me to do to help the team out, I'm willing to do," Goodwin told NJ.com. "It felt a little uncomfortable (playing cornerback Wednesday) but I'm going to have to adjust and get to work."

Interesting take from Ari Wasserman of Cleveland.com. He thinks Penn State?s James Franklin is changing the culture of the Big Ten. And that?s good and bad for Ohio State.

I?ll just say this: Love him, hate him, you can?t ignore Franklin. And I?ll admit that I?m glad he?s in the Big Ten. The conference needs an impetus to push it forward. Franklin could be just what the doctor ordered. It?s not his job to make friends. It?s his job to make the Nittany Lions good.

Much of Nebraska?s success this season hinges on how well QB Tommy Armstrong passes. He gets advice from Nebraska legend Tommie Frazier. The two are texting buddies.

?I?ve texted him for advice,? Armstrong said. ?Certain things about the game. He has told me some things. You?re good at this, get good at that. Get to where you can see what?s going to happen next at the drop of a hat.?

Penn State?s season opener in Ireland could be in peril because of ? a volcano in Iceland? You can?t make this stuff up, people.

"Really, we have to lean on United Airlines (PSU's airline for the game) and the folks that are handling our cargo as it relates to that.

"That's kind of out of our area of expertise. It's important for us to be aware of it but then we'll lean on other experts as it relates to that type of stuff."

Not one ball has been kicked off, but the gang at InsideNU.com wonders what ?mid-tier bowl? fans would like to see the Wildcats go to.

?Mid-tier?? Why have low expectations? Regardless ? The bowls Northwestern typically is being projected for:

Good video here of Minnesota QB Mitch Leidner. He says he?s ready for the season to start. Well, he has a lot to prove and holds a huge key to the Golden Gophers? season. Leidner must pump some air into what has been a flat passing game. This offense needs explosive plays.

There is optimism around Indiana?s defense being better this season. Why? One big reason is because of the linebackers.

When we saw these guys on the tour, they were impressive. I?m talking about Flo Hardin, T.J. Simmons and David Cooper. They could be good. Really.

Looking for Tight End University? How about Iowa? Sure. Dallas Clark was a great one. In fact, he was one of 11 Hawkeyes who have made an NFL roster after playing tight end at under Kirk Ferentz.

No doubt, the program has produced some good ones. And the current squad has four it can use: Ray Hamilton has emerged as the starter. But Jake Duzey, George Kittle and Henry Krieger-Coble make this one of the deeper corps in the league.