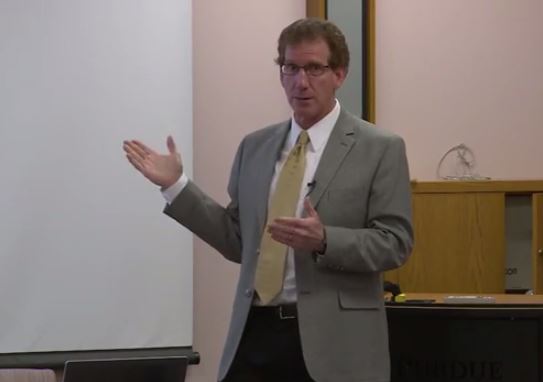 More than 3.4 million people, roughly equivalent to the population of Los Angeles, die each year around the world for reasons that relate back to poor water quality, according to non-profit organization Water.org. And a lack of regular access to potable water negatively affects hundreds of millions more in ways ranging from personal hygiene to education.

Students and faculty from Purdue University are attempting to combat this problem, one village at a time. A small team came together as part of an academic program launched in Fall 2012 at the school. Their efforts since then culminated this summer in the delivery of a water-treatment system to the village of Las Canas in the Dominican Republic.

The program is led by Dr. Ernest Blatchley III, professor of civil engineering and environmental and ecological engineering at Purdue, but it?s academically diverse. ?This was intentionally set up as an interdisciplinary program,? he said. ?This is a problem that can?t be solved by any one particular discipline. Engineering is, in some ways, the easy part of this.?

One of the first challenges Blatchley encountered in rolling out the program was determining which students would participate. It required both a long-term commitment on the part of participants and significant resources to send the team on multiple trips to the Dominican Republic to build the water-treatment system. Consequently, interested students - and there were many of them, Blatchley said -  had to jump through various hoops, such as writing an essay and submitting their transcripts to show their academic performance up to that point, in order to be considered.

?There are a lot more students interested in this class than we can accommodate,? Blatchley said. ?We had to be fairly selective for students participating in this class.?

Once students were chosen for the program, attention turned to the coursework, which included lectures, lab time, and the actual design and construction of the water-treatment system for Las Canas. The village, which has about 1,000 residents, was picked because of its proximity to the Purdue campus in West Lafayette, Ind., relative to other regions that have clean water shortages, and because ancillary partner organizations Aqua Clara International and Rotary International had strong contacts in the Dominican Republic.

The team also traveled to Las Canas a few times during the course of the program to handle details such as figuring out the best site for the system and finding local providers who could handle construction and plumbing work related to the project. But these trips were also taken to ensure the village would be able to take over maintenance and governance of this operation.

?That was by design,? Blatchley explained. ?From the get-go, the continuing objective of this project was to create systems that are sustainable. We wanted them to be involved and they wanted to be involved. Anything to do with the system has to be done by the people who live there.?

One of the first things the team encouraged village residents to do was form a board of representatives that would determine roles, responsibilities and resources around the water-filtration system. Given the way the water is distributed, this is especially critical. The system was built on the grounds of a public school, and the students and teachers there have ?first dibs.? But plenty of extra water will be produced and sold back to villagers. The board will have to decide how to use those revenues to pay salaries, purchase replacement parts, acquire treatment chemicals, and so forth.

Blatchley said the water produced by the system is the least expensive commercial option for Las Canas residents, and much cleaner than the other sources they currently rely on, which include rainwater harvesting and simply dipping a jug into the nearby river. And getting potable water to more people in the village will help improve health conditions there in all kinds of ways - the local physician told Blatchley that she estimated 40 percent of patients she sees are sick because of water they drank.

?She?s overwhelmed right now,? he said. ?With cleaner water, she can focus her efforts on other issues.?

In addition to helping the people of Las Canas live longer, healthier lives, this project fulfills an important goal of university leaders: to broaden the cultural and geographic horizons of its students.

?One of the objectives that the administration has identified for education is globalization,? Blatchley said. ?That?s not just for humanitarian purposes, but also for better understanding the world we live in.?