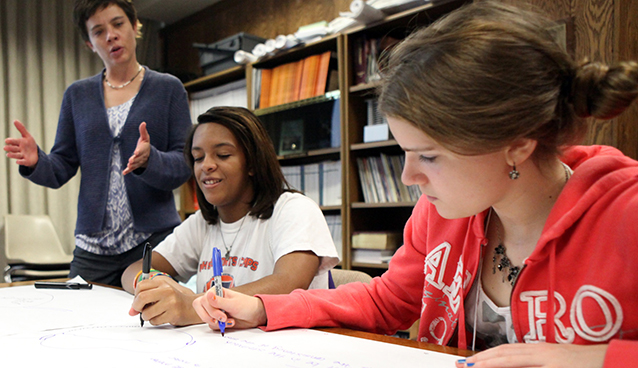 As the majority of Northwestern University?s undergraduates embarked on internships and took some time off from their course work this summer, a group of even younger students immersed themselves in a new and unique program - Northwestern Academy.

Announced in December 2013, Northwestern Academy provides selected Chicago Public School ninth graders - those who are academically talented and come from low- or middle-income families - access to resources that will help them pursue admittance to selective colleges and universities like Northwestern. The first cohort of Northwestern Academy participated in a number of workshops and activities since Spring 2014, Geiger said. In addition to these experiences, the Academy also offered enrollees tutoring, college counseling, exam preparation and mentorship.

The program is intensive-it?s six hours a day, five days a week, over three weeks in the summer-but it also has a very open, accommodating atmosphere.

?It was nothing like school,? said Chantelle Sanchez, 15, a sophomore at Richard T. Crane Medical Preparatory High School who was chosen to take part in Northwestern Academy?s inaugural year. ?They gave us the freedom to learn about anything we wanted to.?

Planned activities this summer included a visit to the Northwestern University Library on the Evanston campus and field trips to Chicago?s Field Museum and Adler Planetarium. Academy students also participated in a work shop with Alison Flowers, a Chicago journalist and Northwestern alum who produces the Exoneree Diaries, a narrative non-fiction multimedia series produced for Chicago Public Media (a National Public Radio affiliate, WBEZ 91.5). Flowers instilled in the students how important it is to tell their stories.

Another group of Academy students participated in a two-day workshop that focused on self-regulatory learning, foundations for understanding motivation and mindsets, and a primer in social networking, Geiger said.

For Sanchez, one of the most memorable experiences was an overnight camping trip to the Indiana Dunes National Lakeshore, located at the southern edge of Lake Michigan. While there, she and her fellow students got a guided ?tour? of the night sky, including a number of stars that aren?t usually visible through the light pollution of the city.

?I was really interested in cosmology,? Sanchez said. ?I enjoyed hearing all the stories about stars and constellations.?

There is no tuition for students attending the Academy, and the multi-year program is supported by private donations and various partnerships. As it grows beyond its inaugural year, Geiger will continue to recruit new students by further developing relationships not only with elementary and high schools but also with community-based organizations throughout Chicago, she said.

Sanchez, who is interesting in earning a Ph.D. and practicing medicine, said Northwestern Academy has started her down a path of intellectual curiosity and good study habits.

?It?s made me more responsible,? she said. ?I?ve stopped procrastinating on school work.?