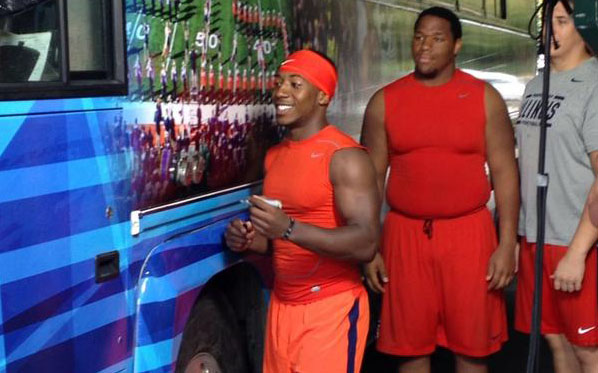 Illinois is looking to continue progress in Year Three under Tim Beckman. Seven starters are back on offense; nine on defense. The offense remains ahead of the defense. In fact, this could become an upper-level Big Ten attack with freshly-minted starting quarterback Wes Lunt at the controls.

The defense is burdened with making the most improvement. Beckman has fortified a roster that was lacking talent, so there appears to be hope. The starters look good. Depth? It is shaky.

Here are my thoughts from Illinois practice.

Most impressive player: QB Wes Lunt. The guy passes the eyeball test at 6-5, 225. Is he the best QB in the Big Ten West? He can really throw it.

Loudest coach: New offensive line coach Tom Brattan flat-out gets after it. A great hire over the summer. Full of passion and energy.

Impressive newcomer: I loved watching true freshman wideouts Mike Dudek and Malik Turner. Each guy has an underdeveloped body but they can catch and run routes. Can?t wait to see them in a year.

Top moment: Watching Tim Beckman work with the cornerbacks. He has a passion for teaching. And it shows in individual work.

Tim Beckman is as hands-on as any #B1G head coach, working extensively with the CBs for @IlliniFootball #Illini pic.twitter.com/kNSUrDKBAm

On the rise: T.J. Neal. The sophomore linebacker looks good in the middle of the defense. I could see him getting 100 tackles.

Nagging question: Is the defense better?

Under the radar: Donovonn Young. He?s a senior and has a sense of urgency. I could see him playing a big role.

After practice, Beckman announced Lunt as the starting quarterback on BTN Live, beating out Reilly O?Toole and Aaron Bailey. Turns out, it really wasn?t much of a competition. Lunt was the clear-cut winner in this derby and the front-runner for days-if not weeks. The kid looks the part at 6-5, 215. And he can really spin the ball. O?Toole is a big guy who lacks the speed of the others but has a nice arm. Bailey is a crazy-good athlete who looks like he has become a better passer. The staff needs to get him involved in some way to maximize his skills.

This o-line may be a bit underrated. It?s all about getting the ?best five linemen on the field.? Illinois has four solid ones. Right guard Ted Karras is aggressive and plays with a defensive mentality. He may be the best of the bunch. Alex Hill is a center with savvy and knowledge. Michael Heitz is at left guard; he also can swing to right tackle if needed. Simon Cvijanovic is the left tackle and is one of the team?s top blockers along with Karras. The area of concern: right tackle. Patrick Flavin ran with the first team today. Big, strong, tough. He?s a former left tackle. Christian DiLauro is pushing him. Watch this position. Austin Schmidt and Joe Spencer also could play up front off the bench. After that, things drop off. True freshman Nick Allegretti is running with the second team at guard. Watch this kid.

The receiving corps has something to prove. No doubt, there are several good options for an offense that uses an array of formations that sometimes includes four wideouts. The top four targets according to OC Bill Cubit are Mike Dudek, Martize Barr, Geronimo Allison and Justin Hardee. Dudek is a true freshman who arrived early and impressed in spring drills. He isn?t big but just gets open; and he?s sneaky fast. I had heard a lot about Allen, a JC transfer. And he didn?t disappoint. He?s a big target at 6-3; long and lanky. Barr, a former JC, is another nice option. He?s the most productive vet. Malik Turner is another true freshman that Cubit raves about. He made some nice grabs today. Devin Church is a speedy option who also can play running back.

The defense has a lot to prove. And it begins up front. The first line is Kenny Nelson at end; Austin Teitsma and Teko Powell are inside; Dejazz Woods at LEO. The inside guys look solid and strong. Teitsma is a veteran anchor who can get a push and muck up the works. Powell is a load who can move. Woods looks good playing the hybrid linebacker/end spot. He has to rush the passer and shows a burst. He?s a good athlete. Nelson is long and lean-6-6, 250; he needs some girth. Depth looked decent. Dawuane Smoot can play on the edge; Jarrod Clements can help inside. Paul James is a true freshman who will play. It was hard not to notice JC end Jihad Ward. He?s 6-6, 295. He looks good. Just needs to play with a consistent effort.

The linebackers have some athletic ability. Neal is considered the best of the bunch after emerging in the spring. He may be best suited to play on the edge but will begin in the middle. Neal is a quick, swift athlete who can run. His ascent at middle linebacker pushed Mason Monheim to the weak side. Monheim is a try-hard guy who won?t be out worked. But he needs to tackle better. Earnest Thomas is slated at STAR, a hybrid linebacker/safety. He was a safety before making the switch. He plays downhill as a run stopper but isn?t great in coverage. This move should fit his skill set. Zepheniah Grimes also is at STAR. Mike Svetina sat out practice hurt.

A lot to prove in the secondary. V?Angelo Bentley and Eaton Spence have good size on the corners. Bentley is fast; Spence needs to be more consistent. It?s time for these vets to take the proverbial next step. Taylor Barton and Zane Petty are the safeties. These guys are hitters with some coverage skills. Petty is smart and quick. Keep an eye on Caleb Day, who could be poised for a breakout. Jaylen Dunlap will help but has been banged up. This unit would benefit from a better pass rush. More picks are needed. Any playmakers back here? Maybe Bentley.

Josh Ferguson is one of the most underrated running backs in the Big Ten. He?s just 5-10, but he?s quick and one of the best pass-catching backs in the nation-which makes him a quarterback?s best friend. He may catch 80 passes this year. Young has taken to critics who said he needs to be more of a North-South runner. He?s so strong. Illinois will use defensive tackle Jake Howe as a fullback at times. He is a 300-pounder who can run and catch. This?ll be fun.

These tight ends can be weapons. Jon Davis is more of a ?move? tight end. They all are on this roster. Matt LaCosse is a rangy target. These guys are like power forwards. Tyler White also is a factor. Cubit puts these guys on the move and uses their athletic ability. The line up in the backfield, out wide, close-in ?

The #B1G has some nice TEs. And @IlliniFootball has two good ones in Matt LaCosse and Jon Davis. Big, athlete power-forward types. #Illini