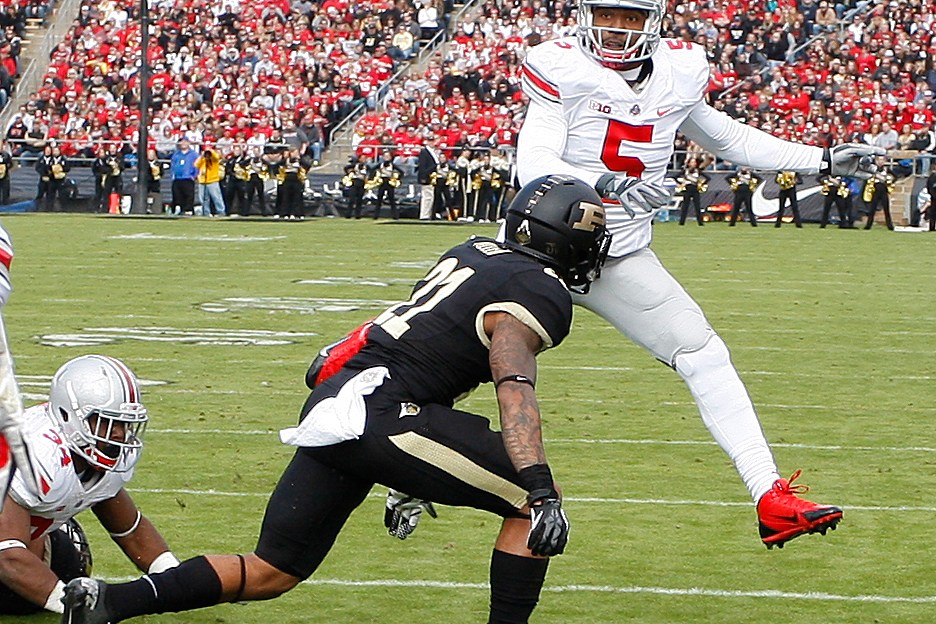 News that senior Braxton Miller is out for the season is a shock and has caused massive speculation on many fronts as to how Ohio State?s season and the Big Ten race will be impacted.

Next man up in Columbus: redshirt freshman J.T. Barrett. Yes, the kid has a fat scrapbook and was an Urban Meyer recruit who can run the spread-option offense. But he never has taken a snap. And he?ll be working behind a line with four new starters.

Get all of our Braxton Miller injury coverage:

Want more? No. 1 running back Carlos Hyde is gone. Should Barrett flop, sophomore Cardale Jones would take over. He has one career pass. You get the picture. There is youth and more youth under center as Meyer embarks in this third season in Columbus.

?My thoughts and prayers are with Braxton and his family,? Meyer said in a team release. ?This is an unfortunate injury to a young man who means so much to this program and to Buckeye nation.?

With Miller, this was a season dotted with national title hopes just 48 hours ago. Now?

Barrett, 6-1, 225, can expect a steady diet of eight- and nine-man fronts, daring the kid to pass. Can he deliver? And what if the Buckeyes fall behind in games? Is Barrett capable of passing OSU to victory? The value of departed backup signal-caller Kenny Guiton is more glaring than ever.

I think it probably was a matter of not if-but when-Miller got hurt in 2014. His injury history and style suggested the peril for injury was good after he initially hurt his right shoulder in the Orange Bowl last season and subsequently had surgery in February. Maybe having it happen now is good, as OSU will have a chance to adjust. And, don't forget, he could come back in 2015.

?I love Ohio State and Buckeye nation, and my goal is to come back from this injury stronger and better than ever,? Miller said. ?I am on course to graduate in December and I want to attend graduate school, and then return to lead the Buckeyes next season."

I have to think offensive coordinator Tom Herman will keep things simple early on for Barrett. Execution must be crisp. Play-calling conservative. Will that be good enough to deliver a big season in Columbus?

The schedule the first two months isn?t daunting, save for a visit from Virginia Tech for Game No. 2. But the opener vs. Navy in Baltimore could be dicey. Heck, every game could be an adventure if the offense can?t be balanced.

A struggling offense will put a lot of pressure on a Buckeyes? defense that has its own issues to resolve coming off a less-than-impressive 2013. The line will be great. The back seven? There is talent, but it must prove it. Chris Ash was brought in as co-defensive coordinator to help stop the bleeding vs. the pass.

Now, with Miller out, this defense must grow up fast and be excellent all season if this is to be a special 2014 for the Buckeyes.

The loss of Miller makes Michigan State the favorite to win the Big Ten. But will the Spartans? schedule have enough juice to earn one of four playoff spots? The trip to Oregon in the second week of the season is even bigger for MSU with this news from Columbus. A win over visiting Ohio State on Nov. 8 may not be as impressive sans Miller.

So, MSU may need to run the table to secure a playoff spot, as the chance to score impressive wins don?t appear to be plentiful on the Spartans? schedule.

This will be an interesting storyline to watch unfold as the season progresses. All isn?t lost for Ohio State; but winning the Big Ten and making the playoffs may be too much to ask.

This looks like it?s Michigan State?s conference to win. The question: Will the Big Ten champ-whoever it is–have enough schedule juice to make the playoffs?