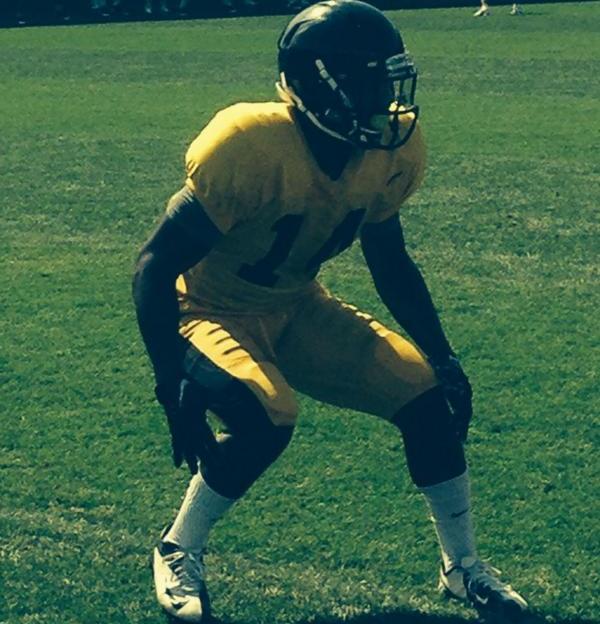 Hopes are high in Iowa City, as Kirk Ferentz enters his 16th season on the job. There?s a lot to like, beginning with strong offensive and defensive lines.

The Hawkeyes have six starters back on offense and five on defense. The offense needs to generate some big-play ability; it?s too often a plodding, pedestrian attack. Explosive plays are needed. Defensively, all eyes are on a linebacking corps that has three news starters. The secondary is being retooled, too, with two new starters.

Here are my thoughts from Iowa practice.

Most impressive player: OT Brandon Scherff. Who else? The guy is a beast who plays with an attitude.

Top specimen: LB Quinton Alston. He?s a sculpted athlete who can move. No fat on him. Plus, he?s a vocal leader and smart.

Best drill: Watching live scrimmage work, the ones vs. the ones. Very physical, game-like conditions.

Loudest coach: D-line coach Reese Morgan look like he weighs 90 pounds. But he has a voice with bullhorn power.

Impressive newcomer: Redshirt frosh RBs Jonathan Parker and Akrum Wadley add a speed element to the backfilled. Slithery and fast. Can coaches find carries for them in a loaded backfield?

On the rise: DT Jaleel Johnson. The 6-4, 310-pound sophomore is a load who can move. He was unblockable today. Sack after sack after sack.

Wanted to see the o-line. Left tackle Brandon Scherff is dominant and looks the part of lynchpin blocker. He just may be the nation?s best left tackle. Skill, size, swagger ? scary. He didn?t disappoint. Could he really be the No. 1 pick in the 2015 NFL draft? Austin Blythe is a nifty center. Andrew Donnal is a monolith at right tackle. Sean Welsh and Jordan Walsh are the guards. The starters are very solid. This is a physical, scrappy group, much like the persona of unit coach Brian Ferentz. The depth? It?s a bit shaky. So, if injuries set in ? Guys like Eric Simmons and Mitch Keppy look good. So does Ike Boettger, a nice looking tackle who just needs to add bulk. Like Scherff, he was a prep QB.

Yes, the Hawkeyes lost some top talent at linebacker. But I think they?ll be OK. Quinton Alston has a lot of experience in the middle. He is set to anchor the core of the defense. Ferentz says the other spots on the outside are up for grabs. Reggie Spearman has become a full-grown man on the weak side. He ran with the first-team today. So fast and now strong and big. Bo Bower also has made some noise on the outside and ran with the ?ones? today. Outside man Travis Perry is the classic try-hard Hawkeye who arrived in town as a walk-on. He figures in. It sounds like Josey Jewell is in the mix at an outside slot, too. I think this unit will develop over time into a strong group.

I was eager to see the receivers, as this team needs some field-stretchers. Kevonte Martin-Manley is solid, as usual. He made some nice catches in practice and is the clear No. 1. But it is the young guys who intrigue me. Guys like Derrick Willies, Matt VandeBerg and Derrick Mitchell. At 6-4, Willies is an inviting target, but he was out today. I?m told he has impressed in camp. Keep an eye on VandeBerg. He?s sneaky fast. Tevaun Smith needs to take that proverbial next step; he caught a TD pass late in practice. Damond Powell is a blazer, but he has been banged up. The former JC transfer may be the fastest of the bunch. Jacob Hillyer is a big target (6-4) over the middle. Lots of potential overall; these guys need to stretch defenses to open room for a strong ground game.

C.J. Fiedorowicz is gone, but there still are some nice tight ends. In fact, Iowa has four who can play. Jake Duzey and Ray Hamilton are top targets. George Kittle is the fastest tight end, a true threat down the field. Henry Krieger-Coble is coming on. All of these guys are 6-3/6-4 and in the 250-range. Iowa will use three-tight end sets and put these guys on the move as de facto fullbacks. Lots of versatility. These guys will play a big role in the offense.

Jake Rudock needs to continue to evolve under center. He looked OK. Not always accurate, but he seems to have a command. C.J. Beathard has a nice live arm but can be prone to make poor decisions. Rudock is steadier. Still, it sounds like Beathard could get a series or two in games.

Running back was a concern not long ago. No longer with the likes of Damon Bullock, Jordan Canzeri and Mark Weisman, among others. Canzeri is impressive and seems to be understanding how to operate in the zone runs. LeShun Daniels looks more comfortable in the zone scheme, too. He is coming on. Iowa suffered a blow when FB Adam Cox was lost for the year to a knee injury. He was going to be the chief escort for this promising collection of running backs. Macon Plewa is No. 1 now. Two linebackers have been moved to the spot. Don?t expect Weisman to fill the role. Look for tight ends to be used as de facto fullbacks at times. Two redshirt freshmen RBs caught my eye: Jonathan Parker and Akrum Wadley. They bring some wiggle to the spot, like Canzeri. Iowa also likes to line up guys like Bullock wide. Even Weisman will go deep in the passing game.

Anytime a Ferentz team is good up front, it has a shot to be good. And this is a good d-line with depth at tackle. Carl Davis is as large as a Coke machine on the interior. He gets a push; so powerful. Louis Trinca-Pasat is a lunch-pail guy who has gotten better and better. Think effort. Faith Ekakitie and Jaleel Johnson are coming on. Johnson was a monster today, making a few sacks in scrimmage work. Pure go-go inside. Darian Cooper was out today. Drew Ott and Mike Hardy come off the edge. Each also can anchor vs. the run and has good girth. Nate Meier is quick and looked good, rounding out a nice three-man set at end. Meier is a nice athlete. After that, things are a bit thin at end.

The secondary needs to be watched. Desmond King has one corner slot tied up. The kid is special, maybe one of the best Ferentz has had. A leader. The other corner spot is a mixed bag. Sean Draper may be the guy. Maurice Fleming bolsters the group in what has been a heated competition. Greg Mabin is in the mix opposite King, too, but he?s banged up. John Lowdermilk has a strong presence at free safety. The other spot? Jordan Lomax, a former corner, is solid. Depth at safety is a concern.

Desmond King is special. He could be one of the best CBs of the Kirk Ferentz era. #Hawkeyes pic.twitter.com/sr822DIGI7

The kicking job needs to be sorted out. That?s a big deal, especially for a program like Iowa?s which typically is in close games where a big kick can make a huge difference. Marshall Koehn, Mick Ellis and Miguel Recinos are in the mix. Koehn has the biggest leg. The punting is up for grabs between Connor Kornbrath and Dillon Kidd, a JC transfer.