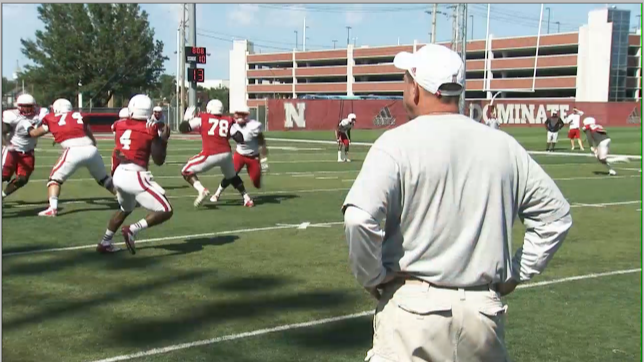 LINCOLN, Neb. – Could this be the year Nebraska finally wins the program?s first league championship since 1999? It may happen if the offense develops balance and the defense delivers on big expectations.

This will be Bo Pelini?s seventh season, which is difficult to believe. No doubt, 2013 was a rocky campaign, as Pelini endured distractions and some on-field issues with his defense-again-and tumult at quarterback. But that was then, this now. The 2014 Cornhuskers look like one of Pelini?s best teams since the last few seasons in the Big 12.

Here are my thoughts from Nebraska practice.

Most impressive player: WR Kenny Bell. He made some nice catches. He?s 6-1, 185, whip-thin. But he gets out and has a burst.

Top specimen: Randy Gregory: The junior end is every bit of 6-6, 240. Will this be his last season? The guy already looks like an NFL player.

Impressive newcomer: DB Kieron Williams. Nebraska got him late from the Air Force Prep Academy. He has a nice build and is quick; could help in this secondary.

Top moment: I love watching d-line coach Rick Kaczenski work. Pure intensity. If you aren?t doing something right in one of his drills, I feel sorry for you.

On the rise: TE Cethan Carter. He?s just a true sophomore, but he could develop into a nice target on underneath routes for Tommy Armstrong.

Under the radar: Alex Lewis. People may have forgotten about him after he sat out following a transfer from Colorado. He?s 6-6, 290 pounds of fury.

The offensive line has a lot to prove, so I was eager to check it out. The unit has just a combined 32 career starts. Projected starting right tackle Zach Sterup is out with injury but should be back for the opener. With him out, Givens Price has been running with the first team. He looks good. The left side of the line is killer. Left guard Jake Cotton is the anchor up front for this developing group. Left tackle Alex Lewis could be one of the Big Ten?s best. Mark Pelini is set at center, but is he big enough for the long haul? The right guard is Mike Moudy, who is solid. Injuries last year allowed this group to develop some depth. And it shows in guys like Ryne Reeves and Chongo Kondolo, who each have emerged in this camp.

Left side of o-line will be strong with T Alex Lewis and G Jake Cotton. Lewis will be one of #B1G's best. pic.twitter.com/aSA6soFTI7

This could be one of the better d-lines in the Big Ten-at least the starters. In fact, all four starters figure to be NFL players. End Randy Gregory looks as good as ever. He's fast, explosive, quick and big. Greg McMullen has a burst off the edge. Walk-on end Jack Gangwish is impressive, which softens the blow of the reported transfer of Aaron Curry. Gangwish is just relentless. I love guys like that. Misses in recruiting have caused a shortage at end. Tackle is deeper. Vincent Valentine is an anchor inside. He keeps getting better each time I come to camp. Many have been saying this could be the year tackle Maliek Collins breaks out. I can believe it. He can swing out to end if needed, too. Depth inside is good. Tackle Kevin Williams moves well coming off a knee injury, but he went down today. Kevin Maurice is coming on at tackle. Rick Kaczenski does a good job coaching this unit.

QB Tommy Armstrong has something to prove from a passing standpoint after connecting on just 51 percent of his throws last season en route to going 7-1 as a starter. The staff says he has been practicing well. He throws a nice ball and should benefit from hitting some check-down routes. Johnny Stanton is a good-looking youngster. He throws a nice ball.

Fumbles were a big issue last year. OC Tim Beck thinks shorter practices will have a long-term effect on limiting team fatigue late in the year, which he thinks has been a contributor to the fumbles. He also thinks not adding to the playbook over the course of the season will help. Fewer things for players to learn; more concentration and focus should help with not fumbling. Beck says the team has fumbled just once since spring ball. And that was a botched exchange between Tommy Armstrong and Ameer Abdullah.

The secondary has taken some hits with corner Charles Jackson lost for the season with a knee injury. And safety LeRoy Alexander has been suspended. Still, this unit looks solid. Diminutive leader Josh Mitchell looks good at one corner, but the competition rages opposite him with Daniel Davie and Jonathan Rose. It?s a close battle. JC Byerson Cockrell is the nickel. The safeties look good: Nathan Gerry, a former linebacker, and Corey Cooper. True freshmen Josh Kalu (nickel) and Kieron Williams (safety) figure to play, according to the staff. Chris Jones is another freshman who may play. Williams is a good-looking athlete Nebraska got late from the Air Force Prep Academy.

I like these linebackers, even with Michael Rose lost for the season with a knee injury. Depth is good. Zaire Anderson looks like the bellwether on the weak side. His knee injury from 2012 is ancient history. He is a sawed-off (5-11) powerhouse. David Santos is just fast at the ?buck? spot. Period. Middle linebacker Josh Banderas is a good-looking athlete. Trevor Roach is the classic try-hard Husker who has carved out a role behind Banderas. Redshirt freshman Courtney Love has impressed on the weak side. Marcus Newby is another young linebacker who looks good at ?buck.? Speed and athletic ability are the norms.

I think this will be one of the better wideout corps. Or at least the potential is there. It all begins with Kenny Bell, a lithe and quick big-play artist. Alonzo Moore looks primed for a big season. The staff kept talking about him. Jamal Turner is a big target. Jordan Westerkamp has underrated speed and nice hands. He has the best mitts on the team. Sam Burtch is good in the red zone. I also like walk-on Brandon Reilly and Taariq Allen.

This is one of the top collections of running backs in the league with Ameer Abdullah, Imani Cross and Terrell Newby. Losing Adam Taylor to a broken ankle injury hurts, but there is enough depth. Beck plans to use Abdullah all over the field in order to get him in space. He?s so strong and fast.

Tight end has been a productive spot for this program in recent years. Sophomore Cethan Carter is emerging. OC Tim Beck thinks he could be a 30-catch guy. Sam Cotton also has a knack.

Mauro Bondi and freshman Drew Brown are battling for the kicking job. It?s close. It sounds like a decision will be made within a week or so. Brown is the brother of former Huskers kicking star Kris. Big leg, big rep.