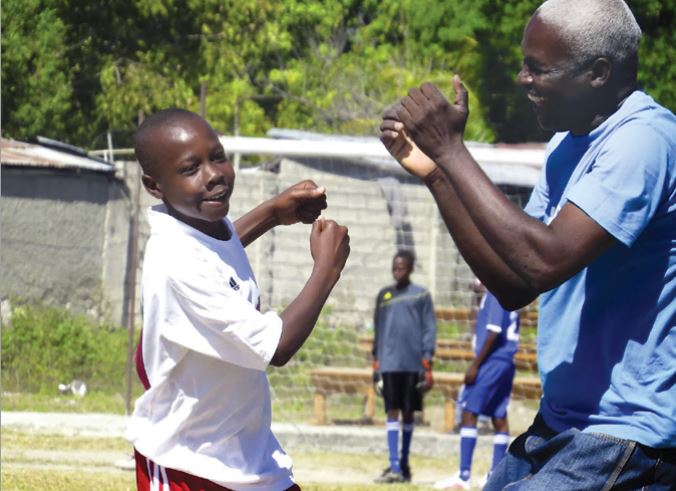 In January 2013, Allie Adam, a senior on the University of Iowa women?s soccer team, traveled to Haiti with a teammate on a weeklong mission trip with Community Health Initiative (CHI), an organization dedicated to providing medical care to rural communities in that country and also addressing broader health issues.

Adam returned inspired with an idea. While in Haiti, Adam had the opportunity to play pickup soccer with some local young people. What started as a casual match became an unexpectedly passionate battle between two talented teams.

?It was barefoot - and it was probably one of the most competitive games I?ve ever played in my life,? Adam says. ?I realized we needed to come back and do something bigger and better for them.?

With the help of a fellow volunteer, six teammates and Dr. Chris Buresh, co-founder of CHI, Adam formed Hawks4Haiti, a non-profit organization that would become the fundraising vehicle for an epic soccer tournament one year later.

Buresh, an Iowa alumnus and emergency medicine physician with the university?s hospital, knew the tournament would be a great fit for CHI. ?It helps the larger organization give back to the community in a different way,? he says. ?We want to help people achieve their potential. Soccer is a great way to do that, and it helps us connect.?

Adam worked with the local CHI volunteer chapter in Iowa City and the university itself to raise funds for the tournament. Due to NCAA student-athlete regulations, Hawks4Haiti does not have an official affiliation with the University of Iowa, but Adam praised the school community for providing support where it could.

?Sally Mason, our president, donated football tickets for our silent auction,? she said. ?And then we went to every coach in the athletic department, who all donated something from their team for the auction.?

Armed with enough funds, Adam returned to Haiti in August 2013 and stayed for six months to help organize the tournament. She spoke to schools and rallied the community to assist in the construction of two soccer fields.

When it came time to pay the laborers for their work on the fields, ?The community leaders said, ?Absolutely not-you are not taking this field on your back when you leave-it is a gift to us, and therefore we refuse to let you pay us for it,?? Adam said.

The tournament itself, held over the course of a week in January this year, was a resounding success. ?It?s so much fun to see kids - and really whole communities - get so fired up about it,? Buresh said. ?To those kids that were playing, it was literally like the end of the World Cup.?

Adam says the enthusiasm of the Haitian players reminded her of the true power of sports. ?Sometimes we get lost in the little things - the fitness, the competitions, the wins, the losses,? Adam said. ?And I think it brought into perspective just how much more it is than that.?

Adam has since graduated from Iowa and is looking forward to starting medical school at the University of Nebraska in the fall. But she hopes to make the Hawks4Haiti soccer tournament an annual occurrence. And her former teammates at Iowa are continuing to raise funds and spread awareness.

Adam and Buresh both expressed their desire to eventually see the tournament become more Haitian-run in the future, but said they would continue to find ways to provide support and participate as long as there was a demand for it. ?If it?s something a community wants, and if it?s something we think we can do responsibly and sustainably, then we would absolutely do it,? Buresh said.