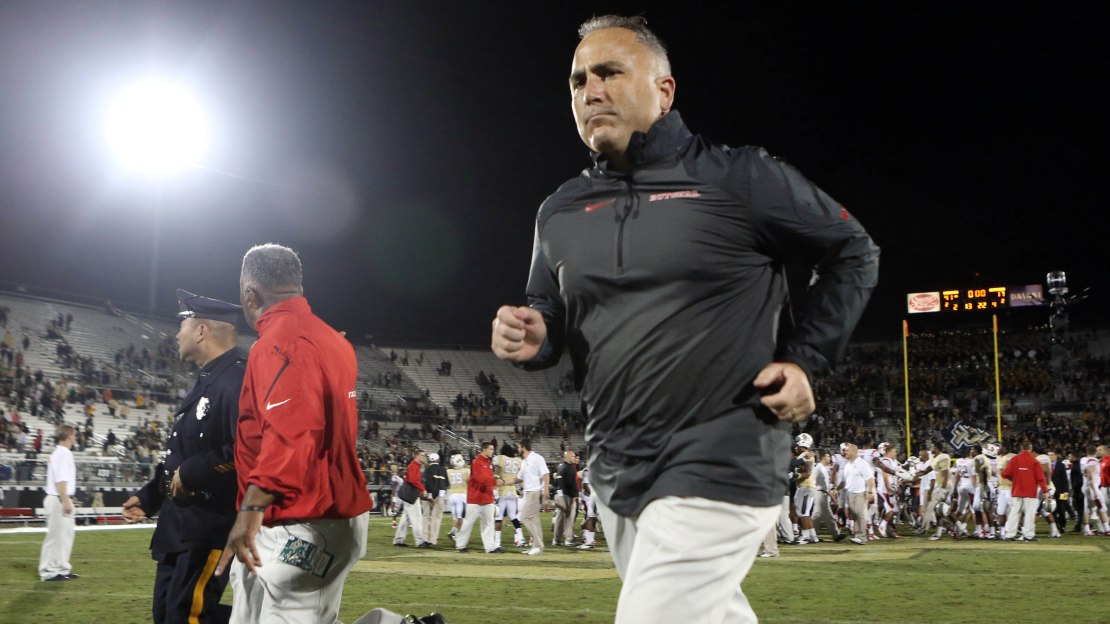 (AP) Big Ten. Big bucks. Little expectations – other than from people at the birthplace of college football. Welcome to the Big Ten Conference, Rutgers.

No one is going to feel the pressure more than coach Kyle Flood. The Scarlet Knights are coming off a disappointing 6-7 record in their final season in the Big East Conference and the competition is only going to pick up with Michigan State, Ohio State, Wisconsin, Penn State and Michigan all on the schedule. The benefits, of course, are a roughly a $10 million annual paycheck from the league, and that amount is likely to increase.

However, Rutgers will be competing in one of the premiere conferences in the country and whether they have the depth and talent to do that remains to be seen.

The Nittany Lions will be welcome Rutgers to the Big Ten on Sept. 13 in Piscataway. Here are five things to watch when Rutgers kicks off the season on Aug. 28 at Washington State.

BIG TEN, SMALL EXPECTATIONS: As Rutgers limps into the Big Ten off a lackluster 2013 campaign, no one outside of the Hale Center is expecting much from the Scarlet Knights. "You can definitely sense that no one is really giving us a chance," junior defensive tackle Darius Hamilton said. "They feel like we're really a doormat just to be stepped on." Rutgers' inaugural season in the Big Ten could set the tone for the program for the years to come.

MAKE OR BREAK FOR FLOOD: While he led Rutgers to a share of the Big East Title for the first time in school history and was named the conference's Coach of the Year in 2012, Flood is coaching for job security. Flood enters the third year of a five-year contract with questions about whether or not he can lead the Scarlet Knights to prominence in the Big Ten. "I'm not naive to why people ask those questions," Flood said. "To me, the only thing that I focus on is how can we make this football team better today. I preach it to the players, I preach it to my staff and I better be doing it myself by example."

NEW COORDINATORS: Rutgers enters the season with two new coordinators. On offense, Rutgers welcomes its fifth offensive coordinator in five years. The 67-year-old Ralph Friedgen – whom Flood lauded as "one of the premiere offensive minds of the last 20-25 years" – came out of retirement. On defense, the 35-year-old Joe Rossi takes over a unit that gave up a school record 4,580 passing yards, ranking them 120 out of 123 FBS schools. While not much will change from a philosophical standpoint, Rutgers needs the new coordinators to bring better results than last season.

NOVA'S TURNOVERS: Quarterback Gary Nova's career can be summed up simply. Strong starts followed by sputtering finishes. After 23 straight starts, Nova lost his job to senior Chas Dodd for the final three games last season. Without much competition, Nova won back his starting job for his senior year. Nova's success will largely depend on cutting back on turnovers. In 28 games, he's thrown for 6,407 yards, 51 touchdowns and 39 interceptions. "What gets Gary into trouble sometimes is that he's so confident in what he can do he lets his confidence override sometimes his decisions and he'll force the ball in there," Friedgen said. "Now a lot of times he wins on those horses too and everybody thinks it's a great throw, but when he loses them it's an interception. That's what we want to cut down – the interceptions."

SCHEDULE: The Big Ten schedule makers didn't do Rutgers any favors when they welcomed them into the conference. Aside from being in the East Division, the tougher division that includes Ohio State, Penn State, Michigan and Michigan State, Rutgers' two games against the West Division are against its top two teams, Wisconsin and Nebraska. "I don't know how big-picture talk is productive for a football team. I know why it happens," Flood said of the schedule. "When you are involved in the day-to-day operation of a football team, we're not thinking that way."