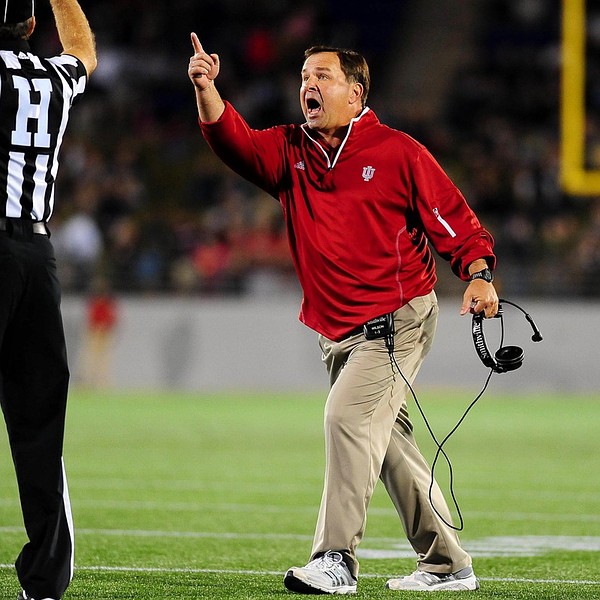 He hit the recruiting trail in hopes of upgrading the size and speed on his roster. The Hoosiers coach critiqued his team's ability to handle success and even took the blame for an errant lateral that may have cost them a crucial sixth win last year.

Now, after all that work and all those struggles, Wilson thinks he's finally on the verge of a breakthrough.

"It's been our best summer. It's not even close because we're more mature, we're more talented, and we're just a higher, better team," Wilson said. "We're making physical gains in strength, we're making them in conditioning, making them mentally."

The real test, as Wilson knows, doesn't come in the weight room or in conditioning drills.

Indiana hasn't been to a bowl game since 2007, largely because of a defense that was getting progressively worse. So Wilson cleaned house.

After firing two defensive assistants, he hired Brian Knorr as his new coordinator. Knorr, who was previously at Wake Forest, immediately switched from Indiana's traditional 4-3 defense to the trendy 3-4, a system players and coaches say is designed to be more aggressive and give the Hoosiers the kind of pass rush fans have been demanding for years.

"I think when our kids get acclimated to it, our speed will be a lot better," Knorr said. "We saw some advancement from the spring to the summer, and hopefully, we'll be able to play with a little more speed and get into some different (blitz) packages in (preseason) camp."

Most of the other key ingredients appear to be in place.

The Hoosiers have an incumbent starting quarterback, a running back with 1,000-yard potential, a deep cadre of young receivers and a Big Ten-sized offensive line. And there are nine starters back from a defense that is committed to changing course after allowing 38.8 points and 527.9 yards per game, both school records.

It's a combination that makes even the blunt-talking Wilson optimistic.

"To me, it's kind of ready to roll," he said. "We're set up in a position where it's going to be a hard challenge, physical schedule, and we're going to have a lot of fun and success."

Here are five more things to watch this season:

STAYING GROUNDED: Wilson's up-tempo offense has scored a lot of points and broken plenty of school records. This year, the goal is to find more balance. With Tevin Coleman healthy and running behind a deep, experienced offensive line, the tools are in place. If the Hoosiers stick to the balanced approach, the defense should benefit, too, from more rest.

TACKLING THE PROBLEM: Knorr can change plenty with his new system. But if the Hoosiers are going to improve defensively, they must figure out how to stop the run and force more turnovers — two major points of emphasis this year.

SOLO SUDFELD: For the first time in his college career, Nate Sudfeld won't compete for playing time. He's the only quarterback on Indiana's roster with starting experience and was arguably the Hoosiers' top quarterback each of the past two seasons. How will he react to his new status? Indiana is about to find out.

NEW RECEIVERS: It's been one of the Hoosiers strongest positions, but Indiana suddenly finds itself searching for replacements. It's not as if the Hoosiers lack bodies or talent — just experience, with the exception of senior Shane Wynn.