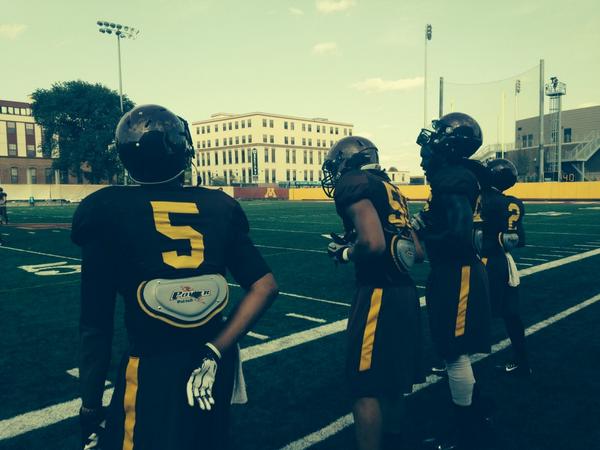 MINNEAPOLIS – There is some mojo to Minnesota as it enters its fourth season under the steady hand of Jerry Kill. This team opened 2013 with an 8-2 mark, running off four Big Ten victories in a row for the first time since 1973.

But the Gophers lost their last three games. Still, this looks like Kill?s most talented team yet. That?s good because a daunting schedule waits with trips to TCU, Michigan, Nebraska and Wisconsin. As well as visits from Iowa and Ohio State.

Here are my thoughts from the Golden Gophers? practice.

Most impressive player: RB Berkley Edwards. He showed the burst I had been told about. He needs to provide big plays.

Top specimen: LB De?Vondre Campbell. He?s a 6-5, 226-pound raven on the edge who covers a lot of ground. He and Damien Wilson will be a nice LB duo.

Best drill: Hitting the sled. Nothing better than watching the big fellas fire off and pound the iron.

Loudest coach: Jerry Kill. He?ll get after it with his country twang. Don?t stoke his ire. Or you?ll pay for it.

Impressive newcomer: Steve Richardson. He is just 6-0, but he?s an animal. If he was 6-5, he would be at a school like Notre Dame. No matter, the guy can play.

On the rise: Donovahn Jones. The former quarterback could emerge as the team?s top wideout. At 6-3, 200, he?s an inviting target with speed. Think Marvin McNutt, a former Iowa star WR who arrived as a QB.

I like this offensive line. The group was a weakness when Kill and Co. arrived in the Twin Cities. Now, it has become a strong point. Limegrover likes these guys. Tommy Olson is an anchor at center. On this day of practice, Josh Campion was left tackle; Zac Epping was left guard; Foster Bush was right guard; Marek Lenkiewicz was right tackle. Jonah Pirsig (groin) and Ben Lauer (ankle) were out. Look for Lauer to move to left tackle when he?s back and Champion to flip over to right tackle.

Mitch Leidner looks like he has gotten better as a passer. I hope. This offense needs him to be able to throw the ball down-field after finishing last in the Big Ten in passing last season. At 6-2, 240, he?s a load as a runner. But his arm is underrated. He needs to learn to trust it. I like the backups, especially Chris Streveler.

Any big-play wideouts? This offense needs to stretch defenses. There is nice size, which fits this team?s offense. Blocking downfield is required. Drew Wolitarsky has a chance to be that go-deep guy. The California kid can run but was out on Friday with a tweaked shoulder. He has nice size at 6-3, 220. Former QB Donovahn Jones is another potential big-play guy, but he?s still adjusting. Still, he could be the best of the bunch. Isaac Fruechte may be the fastest of the unit. KJ Maye is a smallish target who works in the slot. He may be having the best camp of any receiver. Look for true freshmen Isaiah Gentry and Melvin Holland to play.

No shortage of good running backs. David Cobb looks like he has picked up where he left off last year. He?s running hard and showed his work ethic by staying late after practice to work on individual stuff. This time last year, Cobb was buried on the depth chart. Now he?s a star. Donnell Kirkwood used to be the starter. He?s pushing hard. Rodrick Williams is physical. Berkley Edwards was the guy I really wanted to see. He is fast, which is just what an offense dying for big plays needs. He looks good to me. The pecking order: Cobb, Williams, Kirkwood/Edwards. Edwards would split wide from time to time in the practice I watched. The staff wants to get him in space to utilize his speed. He also comes around for end-arounds.

These tight ends are good-looking. I?m sure Limegrover will take advantage of their skills. Maxx Williams and Drew Goodger are a nice duo. These guys can block, too. They have to in this offense. Williams may be the best pass-catcher on the team. He has a knack to wall-off foes. He made one nice catch on this day. Nate Wozniak is a freak at 6-10.

The linebackers have something to prove. I fell in love with De?Vondre Campbell last year. He?s a 6-5 pterodactyl. My opinion has changed. He has those long arms. Damien Wilson is physical and relentless. Staffers swear he?s an NFL player. Jack Lynn is the other projected starter. This is a nice threesome, but depth is iffy. Cody Poock was supposed to start but hurt a knee in the spring. Jerry Kill told me after practice Poock could be back in time for Big Ten play. But if he?s not ready, Poock will redshirt. A true freshman LB to watch: Jonathan Celestin.

Depth at LB needs to flesh out, but @GopherFootball starting LBs Wilson, Campbell and Lynn are good. pic.twitter.com/H0xwwWkMuL

The d-line should be good. Nice depth. And three starters are back. Too bad Ra?Shede Hageman isn?t one of them. End Theiren Cockran is a 6-6 angular rusher off the edge with long arms. Michael Amaefula is undersized on the other end. But he?s quick. And productive. Scott Ekpe is a try-hard tackle. Ditto Cameron Botticelli. True freshman Brandon Lingen came in as a tight end but has moved to end. He?s big, fast and will grow. Coaches love his potential. Steve Richardson is a big-time true freshman who will play.

The secondary will the strength of the defense. No doubt. Safety Cedric Thompson plays downhill and has good energy. He should be a leader for this defense. CB Eric Murray has some shut-down skills. He also has some swagger, which a good corner needs. Derrick Wells is opposite Murray. A former safety, Wells is physical. Don?t forget about Briean Boddy-Calhoun and Jalen Myrick. True freshman CB Craig James is coming on and is expected to play. The staff likes the kid.