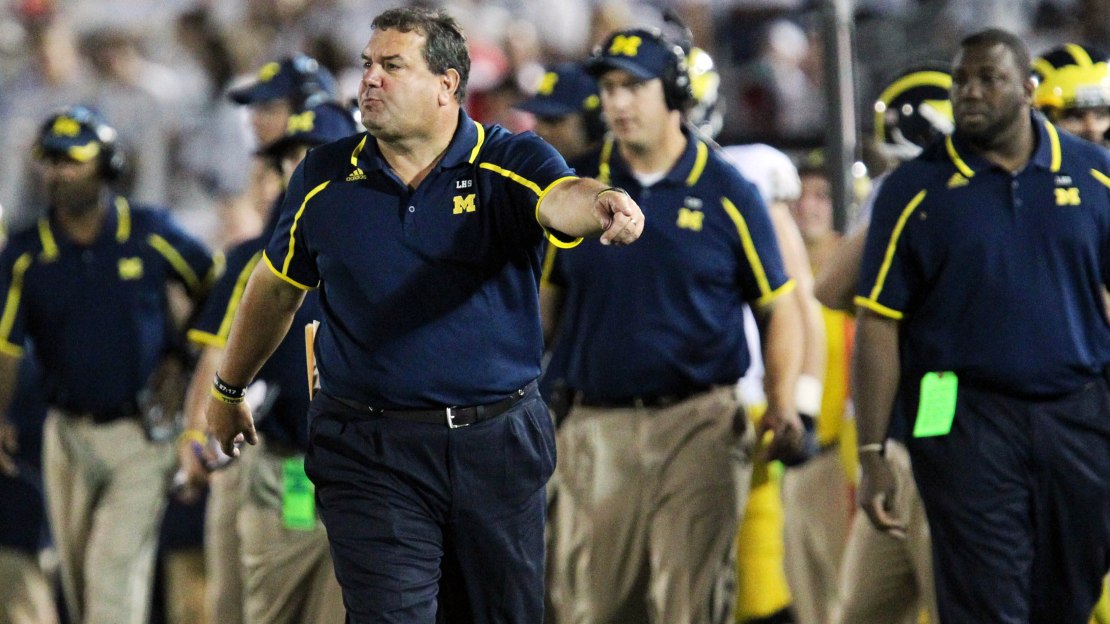 (AP) Michigan hired Brady Hoke to turn its program around, and the coach is still trying to get it back on track heading into his fourth season.

"The identity of this team is still one that we're developing and trying to develop," Hoke said Sunday during his news conference at media day.

And Hoke is anxious to see some improved results on the field after two straight lackluster seasons.

"There were a lot of depth issues that we've had," he said. "That's not an excuse because here are no excuses. No. 1, we've got to do a better job at what we're doing."

Michigan maintains its goal is to win a Big Ten championship, a trophy the school has not earned in a decade.

"The expectations never change," Hoke said. "If you lower the bar, ever, I think you're making a mistake."

Hoke's boss, athletic director Dave Brandon, said it would be a mistake to say it's a make or break year for a coach with three years left on his six-year contract.

"I don't think it is a pivotal year," Brandon said Sunday in an interview with The Associated Press. "It is another year to make progress and show growth with more recruits who are the type of athletes he wants for his style of play."

Hoke had 11 victories in 2011, went 8-5 the next year and 7-6 last season, but Brandon said Hoke is having success in other ways as the Wolverines' leader.

"Sadly, there are people who only care about wins and losses," Brandon said. "Part of Brady's job description is to teach life lessons that help young men become successful in life, and he's doing a great job at that."

Will Hagerup would agree perhaps more than any other current player.

The 2012 All-Big Ten punter is eligible to play this season after sitting out all of last year following a suspension for violating unspecified team rules.

Michigan defensive coordinator Greg Mattison said what Hoke has done since he was hired Jan. 11, 2011, has been "unbelievable," including going 69 for 69 on graduating seniors.

"All you hear about in today's world is how dysfunctional some of the kids are and how we cheat the athletes," Mattison said. "Every senior that has come through here since we got here has graduated."

Michigan, though, expects to win on the field as well as in the classroom, and there seems to be a position group that might make that a challenge this season.

The Wolverines are replacing two senior tackles on their offensive line, including first-round pick Taylor Lewan, and have not settled on a starting five. If some inexperienced players emerge and turn potential into production quickly, Hoke might get what he is looking for this year.

"I want it to be a football team that can run the football and have a toughness at the line of scrimmage on both sides of the ball," he said. "I think the identity part of it is a toughness that this program has had for many years. That's part of what I'm looking for and believe me, it's been verbalized enough to the players."