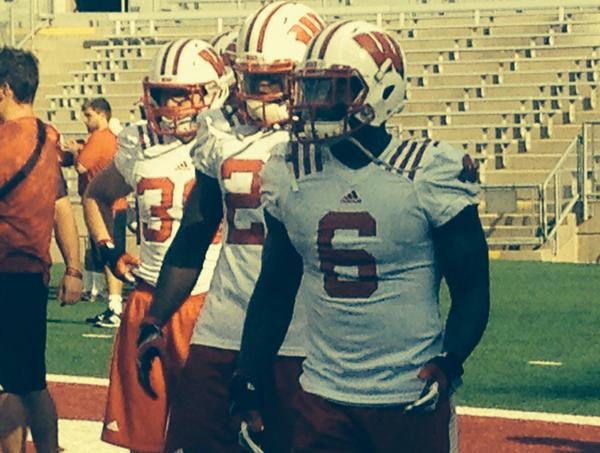 It doesn't get much better than Corey Clement and Melvin Gordon, the best RB duo in the #B1G. #Badgers pic.twitter.com/0OnS9pFFbP

This got me thinking about the best duos in the conference. Are Gordon and Clement indeed the top duo?

Get all of our latest rankings posts:

Here are my rankings.

1. Melvin Gordon and Corey Clement, Wisconsin: Dienhart got it right with this one. This duo combined for 2,156 yards and 19 touchdowns on the ground last season. Keep in mind, that came while sharing carries with James White, who is now off to the NFL. It's very possible these two could combine for 3,000 yards and 25 touchdowns in 2014. Bold, yes, but certainly doable.

3. Zack Zwinak and Bill Belton, Penn State: In Wisconsin's backfield, it is clear that Gordon is the lead back. In Nebraska, the same goes for Abdullah. Penn State has the luxury of having two lead backs who are interchangeable. Zwinak and Belton are the only returning duo in the Big Ten to each rush for more than 800 yards last season. That's impressive.

4. Jeremy Langford and Delton Williams, Michigan State: Langford is one of the top returning backs in the Big Ten, if not the country. Sophomore Delton Williams, a 6-1, 235 pound bruising back who averaged 6.3 yards per tote in 2013, is a very formidable No. 2 option. This is another duo that could reach the 25 touchdown mark this year.

5. David Cobb and Berkley Edwards, Minnesota: David Cobb gets my vote for the most underrated back in the Big Ten. He put up 1,202 rushing yards and seven touchdowns last season. Add in redshirt Berkley Edwards, the younger brother of Braylon Edwards and a shifty back with blazing track speed, and this duo has the chance to be explosive in the upcoming season.

6. Ezekiel Elliott and Rod Smith, Ohio State: Why rank a duo that combined for just 379 yards rushing and four total touchdowns this high? Well, for starters, Carlos Hyde was the bell cow for the Buckeyes last season. Now with Hyde off the to the NFL, Elliott and Smith should get the majority of the carries this season. Elliott averaged a whopping 8.7 yards per carry last season, so it will be fun to see what he does as the primary guy. Smith carried the ball just 22 times for 117 yards last season, an average of 5.3 yards per tote.

7. Mark Weisman and Jordan Canzeri, Iowa: Weisman is the lead back for the Hawkeyes, nearly topping the 1,000 yard mark last season. Canzeri totaled 481 yards last season, despite only carrying the ball 74 times, an average of 6.5 yards per tote. It's no secret that Kirk Ferentz loves to run the ball, and the Hawkeyes should do that with plenty of success this season.

8. Tevin Coleman and D'Angelo Roberts, Indiana: Coleman is another guy who doesn't necessarily get the credit he deserves. This is a guy who rushed for 938 yards and 12 touchdowns last season, despite not playing in the final three games of the season due to an ankle injury. Roberts is another promising back who should get his chance to contribute more this season.

9. Josh Ferguson and Donovonn Young, Illinois: Ferguson is an elite playmaker who is a breakout candidate heading into this season. He totaled more than 1,300 yards and 11 touchdowns last season while playing an h-back type role in Bill Cubit's offense. Young is a guy who is more of a traditional back and should be used more this season in a two-back system. With Wes Lunt behind center and these two sharing carries, this Illinios team has the talent to surprise some people this season.

10. D'eVeon Smith and Derrick Green, Michigan: The Wolverines have a young, yet talented duo of backs this season in Green and Smith. Much of their success will depend on how Michigan's offensive line develops throughout the season. The talent is there, but these guys need holes to run through.

11. Paul James and Desmon Peoples, Rutgers: Paul James is a name Big Ten fans will soon be familiar with. He rushed for 881 yards and nine touchdowns last season in an offense that had its ups and downs in 2013. Peoples is a promising youngster who only carried the ball six times in his freshman season. With Justin Goodwin making the move to cornerback, expect big things from this duo.

12. Treyvon Green and Justin Jackson, Northwestern: With Venric Mark in the mix, the Wildcats backfield duo of Mark and Green would have skyrocketed up this list. But after Mark announced he would be transferring, the Wildcats are suddenly left with a void in their backfield. Now, it looks like true freshman Justin Jackson will be the guy to share backfield duties with Green. Jackson is a highly touted recruit, but how he will adjust to the college game is unclear.

13. Brandon Ross and Albert Reid, Maryland: Maryland is loaded with talented pass-catchers, but will the running game develop in 2014? Ross is a proven back, while Reid is a bit of a wildcard. If this running game progresses this season, Randy Edsall's offense could be one of the best in the Big Ten.

14. Raheem Mostert and Akeem Hunt, Purdue: If this were a list of the fastest duos in the Big Ten, this group would probably top the list. But Mostert is a guy who was used primarily as a return specialist and is expected to be used more in the running game this season. Hunt is another speedster who averaged just 3.8 yards per carry last season, but should see plenty of carries in the upcoming season.