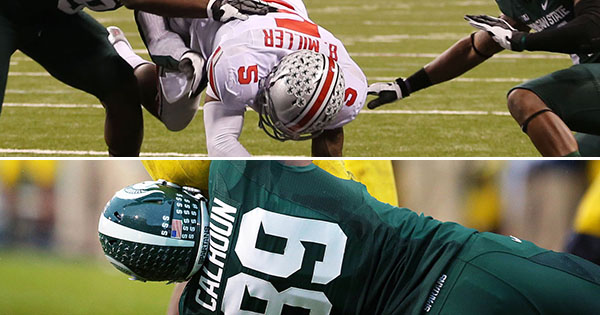 Kickoff is fast approaching. To help count down the days to Aug. 28, the BTN.com team is discussing one topic every day. Think of it as our countdown to kickoff. Today?s topic: East scariest player? See Tom Dienhart, Sean Merriman and Brent Yarina?s picks in this post.

Sean Merriman: Shilique Calhoun, DE, Michigan State. When it comes to the top pass rushers in the Big Ten, Calhoun ranks among the best. At 6-5, 260 pounds, Calhoun has elite size and speed, which makes him a force off the edge from his defensive end position. This is a guy who had 7.5 sacks last season in his first year as a starter. Don?t be surprised if you see Calhoun reach double-digit sacks in 2014.

Brent Yarina: Shilique Calhoun, DE, Michigan State. The facemask is scary. The player is even scarier. Calhoun is an absolute beast, an athletic freak, whatever you want to call it, and he's added weight since last year's breakout season. He says he's up to 260 pounds, which is terrible news for offensive lines and quarterbacks across the Big Ten.