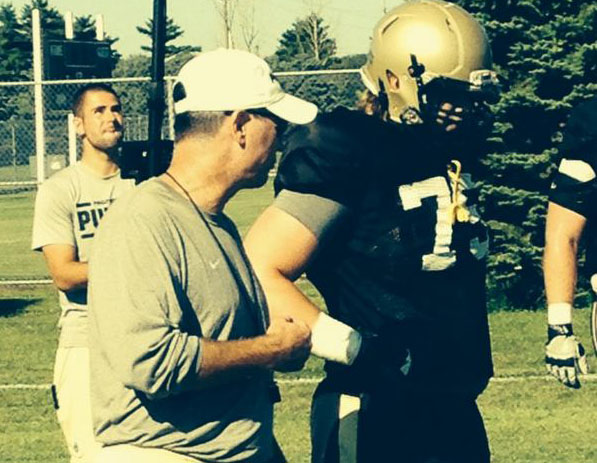 RENSSELAER, Ind. – It?s all about improving for Purdue, which is coming off a rough 1-11 season that saw the team struggle in just about every phase of the game.

This remains a young team whose best years seemingly are ahead of it. But growing pains remain as this still is a roster that needs more talent. The success of the season will rest with the play in the trenches, which was sub-par last season. The o-line has the most work to do on the team. Defensively, the linebackers are a question.

Here are my observations from practice.

Impressive newcomer: LB Ja'Whan Bentley. The true freshman already weighs 250. And he moves well. Can't wait to see him in another year.

Top moment: WR Danny Anthrop made some nice grabs on the run. I think he's primed for a big year. He'll run back punts, too.

On the rise: OT David Hedelin. A JC transfer from Sweden, he has to sit out the first three games for a transfer issue. He'll start once available. He plays with a defensive attitude at left tackle.

Nagging question: Will the o-line be better?

Under the radar: LB Jimmy Herman. The sophomore is an athletic 230-pounder at a position of need. Look out.

The offensive line is making strides but has a ways to go. Coach Jim Bridge coaches ?em hard. The interior looks good. No doubt, center Robert Kugler is the best of the bunch. Jason King and Jordan Roos are strong guards; King is the better of the two. The tackle slots are works in progress. Cameron Cermin was flipped to left tackle from guard earlier in camp and is making progress. He moves well and looks the part. But is he ready for this important job? Hedelin, a JC transfer, figures to man the spot, but he has to sit out the first three games. He plays with a nasty edge, bringing much-needed attitude to a unit that needs more of it. He figures to become a starter when his suspension is up. J.J. Prince is settling in at right tackle. He has picked up from his strong spring. On this day, the No. 1 line was: LT Cermin; LG King; C Kugler; RG Roos; RT Prince.

There may not be a larger player in the #B1G than 6-8, 400 pound @BoilerFootball OT Corey Clements. pic.twitter.com/GTIKRB1ozF

Look for this offense to lean on the pass. It?s about getting the ball out quickly to utilize the wideouts and minimize what is asked of a line that?s still a work in progress.

The receiving corps has options and depth, but is there a difference-maker? DeAngelo Yancey emerged as a true freshman last year. He?s a big target who gets open but lacks top-end speed. You can see the swagger in his game. He knows he?s the No. 1 option. Danny Anthrop has speed. Plus, he?s versatile, able to play any of the wideout spots. He?s smart and knows his assignments. He made some nice grabs today. B.J. Kanuf worked with the first team along with Yancey and Anthrop today. Kanuf reminds me of Vinny Sutherland. The team needs more from its tight ends and has three solid seniors in Justin Sinz, Gabe Holmes and Dolapo Macarthy. Holmes is the most intriguing of the bunch at 6-5, 258. Injuries have dogged him.

The linebacking corps long has been a sore spot. But a true freshman offers hope. Ja?Whaun Bentley is rising up the depth chart. He already weighs 250 and brings instincts, attitude and athletic ability to the position. Jimmy Herman is another backer that Hudson loves, a terrific athlete who can run and hit. Sean Robinson and Joe Gilliam are solid vets.

The d-line looks good. Coordinator Greg Hudson will play a 4-3 with an end who plays standing up. Hudson likes Danny Ezechukwu in that role. Sean Robinson also is taking turns there, along with Jalani Phillips. Purdue needs a difference maker here. Hudson thinks he has one at tackle in Ra?Zahn Howard. He is legit. He?s a 323-pounder who can move people. He was limited today as he recovers from injury. Gelen Robinson, son of Glenn, is making noise but has a ways to go. He began camp at linebacker but moved to end, his high school position. At the other end, it?s hoped end Ryan Russell becomes a force. He?s a senior. It?s time. The key: playing hard each down. Russell has the physical tools. This should be one of the stronger areas on the team. I said that last year, too, and it didn?t pan out.

The secondary has lots of experience in corners Antonie Lewis and Anthony Brown. Safety Landon Feichter is a heart-and-soul guy. The other safety is Frankie Williams, an undersized junior. Safety Taylor Richards is suspended for the first two games.

Some nice options at quarterback. Etling was thrown in as a true freshman last year. He struggled but showed glimpses. Austin Appleby is a big signal-caller who looks capable. I like true freshman David Blough, who may be the most accurate of the bunch. Etling and Appleby have been splitting reps with No. 1s. Darrell Hazell has said it?s an open competition; a starter will be tabbed after Saturday?s scrimmage. I think Etling will be the man.

Cody Webster was one of the nation?s top punters last year. Now, he?s gone. Into that void is Thomas Meadows.