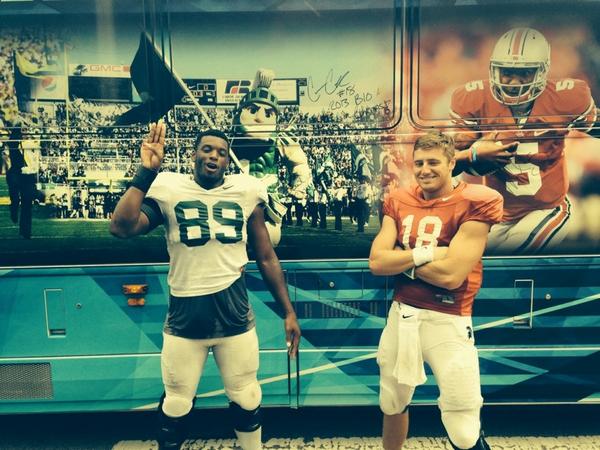 EAST LANSING, Mich. – Michigan State is now the hunted. How will it respond? It should be interesting. The Spartans have scaled the top of Big Ten mountain, capping a conference championship season with a Rose Bowl triumph en route to going 13-1 last season.

The offense is loaded with skill talent but needs three new starters up front. The big holes to fill are on defense, as there will be six new starters. But Mark Dantonio has proven he can evaluate talent, recruit and find guys who fit his system in what is the ultimate blue-collar program. I still think this is the team to beat in the East.

Here are my thoughts from the Michigan State practice.

Most impressive player: CB Trae Waynes. He?s the new shutdown corner. He is every bit as talented as Darqueze Dennard; and his instincts may be better.

Top specimen: Shilique Calhoun. The defensive end is a chiseled mass of muscle. He should be the first guy off the bus.

Loudest coach: DC Pat Narduzzi is always on the prowl, yelling and barking. He even got on a ref!!! At practice!!!

Impressive newcomer: Malik McDowell. The true freshman defensive tackle already has the body of senior. He?s huge. Once he learns to play with consistent effort, look out.

There has been a lot of buzz about true frosh DT Malik McDowell. Narduzzi says the buzz is merited. He has impressed. pic.twitter.com/8ghpI49Na9

Top moment: Everybody on the move! Twice. About 30 minutes into practice, a gas leak caused by construction workers forced the team across the street to practice. About 90 minutes later, thunder broke out, forcing the team into its indoor facility.

Under the radar: The tight ends. Josiah Price, Jamal Lyles and Andrew Gleichert. This is an underrated trio that will be productive. Price is the best; Lyles is a former defensive end.

Josiah Price could be a serious match -up problem. Nice grab in stride from Cook about 25 yards down field to start team drills

Yes, this o-line has three new starters, but don?t fret. There are vets stepping in. Left tackle Jack Conklin and center Jack Allen are among the best in the Big Ten at their spots. Conklin could develop into a first-round talent after arriving as a walk-on. Incredible. He has slimmed down and moves better. Allen is just nasty. Today, Connor Kruse was at right guard with Donavon Clark at right tackle. Travis Jackson is the right guard; he has started at center. Kruse can play any spot. This unit will be just fine.

Connor Cook looks like he?s ready to go. It?s amazing to think that this time last year he was fighting for this job and actually lost out to Andrew Maxwell. Now, Cook is one of the top quarterbacks in the Big Ten, if not the nation. He threw the ball well today and has the poise and savvy of an accomplished vet-which he is. He needs a better command in the huddle and grasp of terminology, but those things should come in time. And the depth at this position is among the best in the Big Ten with Tyler O?Connor and Damion Terry, who the staff figures to have a package for.

There is no shortage of quality wideouts. Lots of competition. Terrence Samuel says he could play as many as eight and feel good about it. This unit was a big question in August 2013. Credit Samuel for getting this group up to speed to the point now where it is one of the top corps in the Big Ten. The only key loss was Bennie Fowler. Aaron Burbridge, Macgarrett Kings Jr., and Tony Lippett lead the charge. Samuel says Lippett is a ?beast.? He looked good on this day. A.J. Troup has been an early camp star. He could become one of the better options this fall. Tres Barksdale, Keith Mumphery, DeAnthony Arnett and R.J. Shelton make this a deep unit. Keep an eye on Shelton. Several coaches told me the former running back could be a player on the rise.

The battle behind stud running back Jeremy Langford is heated. True freshman Madre London looks good and has impressed but playing time may be scarce at this deep position. Nick Hill, Delton Williams ? so many backs, only so many carries.

I was interested to watch the linebackers with Max Bullough and Denicos Allen gone. Taiwan Jones is the new man in the middle. He is physically imposing, a true force, which is why he was moved inside. The flanks can run. Ed Davis is the new blitzer, filling Allen?s role. Darien Harris mans the ?Star? slot. Narduzzi also likes Jon Reschke. And Riley Bullough moves well. Funny to think he was in the offensive backfield at this time last year.

It seems the Spartans always have a marquee cornerback. This year?s stud is Trae Waynes with Darqueze Dennard gone. It?s the shut-down corner who makes this defense go. Darian Hicks is the man opposite Waynes. Narduzzi has his guys playing aggressively, as tough man defense is the norm. You need to be athletic and strong. These guys are. And it?s their skill and style that sets the tone for this defense. The staff barked incessantly, ?run to the ball!? Safety Kurtis Drummond excels in run support. The guy likes to hit from the back end of the defense. R.J. Williamson is the likely starter at strong safety. Jalyn Powell and Demetrious Cox add depth to this talented safety group.

Up front on defense, there is loads of talent. This is one of the most impressive fronts I have seen. Shilique Calhoun and Marcus Rush form one of the top end tandems in the Big Ten. Calhoun is a freakish athlete who poses matchup problems. He looked to be in midseason form today. Rush lacks bulk, but he has a burst.

Lawrence Thomas is a load inside. It?s time for him to play a big role. I really wanted to see touted true freshman Malik McDowell. And he didn?t disappoint as he settles into tackle. The guy is huge, but he lacked consistency. He was told to ?put on your helmet, Malik!? many times while on the sideline. McDowell isn?t the only stud freshman tackle: Enoch Smith and Craig Evans also are impressive. They have bodies of upperclassmen. This is the most difficult position to fill; the Spartans have done well.

It was fun to watch punt Mike Sadler and kicker Michael Geiger workout. There is no better punter-kicker duo in the Big Ten. Big legs. Big weapons.