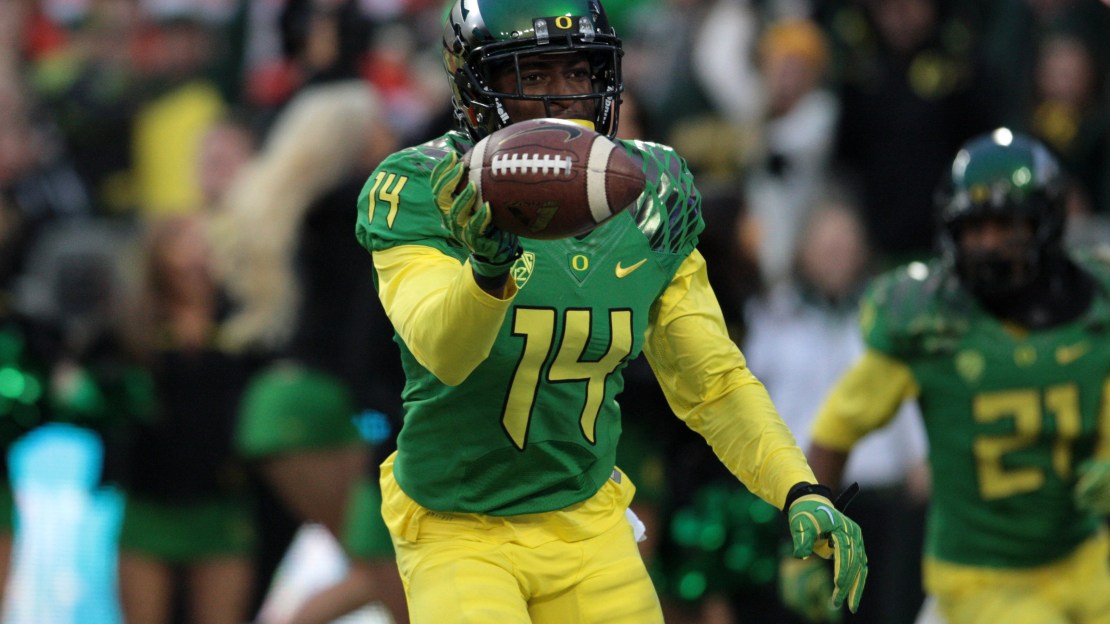 Last week, I took a look at the top offensive players the Big Ten will face in this year's non-conference schedule. Now, it's time to flip the switch and take a look at the other side of the ball.

A bevy of defensive playmakers fill the non-conference slate, as names such as Iko Ekppre-Olomu, Jaylon Smith and Kendall Fuller will try and slow down opposing Big Ten offenses.

Here is a countdown the top 10 defensive players Big Ten teams will face in non-conference play in 2014.

10. KeiVarae Russell, CB, Notre Dame: With a new-look front-seven in place, Notre Dame will rely on Russell and this secondary to lead the Irish defense. This is a guy who has started all 26 games he has played in during his collegiate career. In two seasons, Russell has totaled 109 tackles and three interceptions, while going up against some the top wideouts in the nation. Michigan, Purdue and Northwestern will face the challenge of trying to pass on Russell and this talented Irish defense in 2014. Look out for that Week 2 matchup against Michigan where we could see Russell match up against Devin Funchess. That will be a fun one to watch.

9. Sam Carter, S, TCU: When talking about the top ball-hawking defensive backs in the nation, Carter's name should always be mentioned. This is a guy who led TCU with five picks last season, which also ranked second in the Big 12. He tied for second on the Horned Frogs with four sacks, while adding 49 tackles, 7.5 of which were for a loss. With the absence of end Devonte Fields, Carter will need to step up and have a monster season for Gary Patterson's defense. He figures to make plays against the run and the pass in Week 3 vs. Minnesota.

8. Tre'Davious White, CB, LSU: Are you starting to see the trend here with defensive backs appearing early and often on this list? Big Ten wideouts are going to have their hands full in non-conference play, and White is one of the best of the bunch. A third-team Freshman All-American last season, White is expected to be one of the top corners in the all-mighty SEC. He will have the task of shutting down Wisconsin's new-look wide receiver group in a must-see Week 1 matchup.

7. Tyler Matakevich, LB, Temple: Penn State's explosive offensive attack is going to be tested on Nov. 15, when the Nittany Lions host Temple. Leading the Owls' defense is Matakevich, who is a tackling machine. The 6-1, 230 pound junior was an honorable mention All-American last season after posting an eye-popping 137 tackles, which ranks seventh all-time in school history. It will be interesting to see how PSU's offensive line handles the pressure from Matakevich and the Temple front-seven.

6. Derron Smith, S , Fresno State: One of the biggest questions facing Nebraska this season is how will Tommy Armstrong Jr. handle the starting quarterback job? One thing is for certain: he is going to have his hands full trying to pass on Smith and this Fresno State defense. So, just how good is Smith? Well, for starters, his 14 career interceptions are the most of any active FBS player. He has been selected as the Mountain West Preseason Defensive Player of the Year for the second straight season and is widely considered one of the top defensive backs in the game.

5. Kendall Fuller, CB, Virginia Tech: Fuller was a mega-recruit when he arrived at Virginia Tech last season, and he certainly lived up to the hype. A freshman All-American and the reigning ACC Defensive Rookie of the Year, Fuller picked off six passes and made 58 tackles in 2013. He will get the chance to go up against a bevy of talented pass-catchers when the Hokies travel to Columbus to take on Ohio State in Week 2.

4. Shaq Thompson, LB, Washington: This is a guy who arrived at Washington back in 2012 and has made an immediate impact from the second he stepped on the field. Standing at 6-1, 228 pounds, Thompson has great size and skill for his outside linebacker spot. In two seasons, Thompson has recorded 152 tackles and four interceptions for the Huskies. Illinois will take on Washington in a Week 3 matchup.

3. Jaylon Smith, LB, Notre Dame: Another talented linebacker, Smith will be looked upon to be the anchor of the Irish unit. This guy was a stud in his freshman season, recording 63 tackles, which was the third-most ever for a Notre Dame freshmen. His impressive 2013 stat totals included 6.5 tackles for loss,  one forced fumble, one fumble recovery, one interception, one quarterback hurry and three pass breakups. The Big Ten should see plenty of Smith this season as Michigan, Purdue and Northwestern will all be tested by the new-look Irish defense.

2. Denzel Perryman, LB, Miami (Fl.): How do you contain a guy who has totaled 241 tackles over his career? That's a question that Bo Pelini's Nebraska team will have to face as the Huskers are scheduled to take on the Hurricanes in a Week 4 non-conference showdown. At 6-2, 242 pounds, Perryman has the size of a middle linebacker, but contains the speed and athleticism of an outside backer. After earning All-ACC honors last season, don't be surprised to see this guy get some All-American consideration in 2014.

1. Ifo Ekpre-Olomu, CB, Oregon: Not only do the Ducks have the top offensive player the Big Ten will see in 2014, but they also have arguably the top defensive back in the game. Ekpre-Olomu is a two-time All-American and a lock-down corner who anchors the Ducks' talented secondary. A 5-10, 195 corner with blazing speed, Ekpre-Olomu finished last season with 84 tackles, three interceptions, six pass-breakups and five tackles-for-loss. All three of his interceptions occurred in the end zone to halt opponents? scoring drives, which let's you know exactly what type of talent he is. Connor Cook draws this guy in the much-anticipated Week 2 matchup.