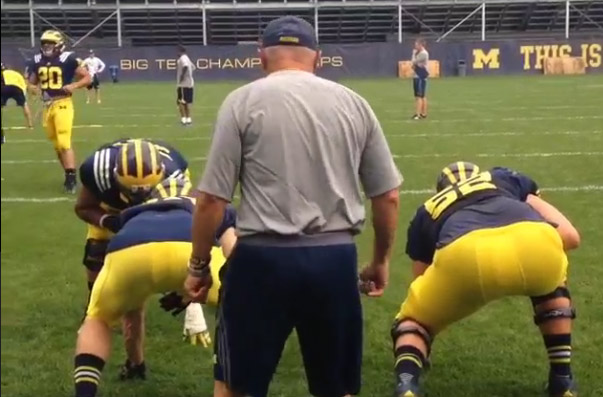 ANN ARBOR, Mich. – Michigan has just 10 scholarship seniors as Brady Hoke enters his fourth season in Ann Arbor. He hasn?t been able to replicate his 2011 debut, when he went 11-2 and won the Sugar Bowl. Needless to say, the Wolverines will be scrutinized this fall.

The defense has a chance to be good from front to back. The key to success will be how the offense develops, especially up front. New coordinator Doug Nussmeier has arrived from Alabama. Don?t expect any new, radical schemes. Just look for a balanced attacked built around the ground game.

This was a tough, physical practice in full pads. It also was a spirited session with lots of energy, even after the rain came and pushed things inside.

Here are my thoughts from practice.

Best drill: Fun to watch the o-line and d-line engage in pass block-pass rush drills. Man-on-man on an island.

Loudest coach: Brady Hoke is pretty vocal. He has a raspy voice and barks at players with frequency.

Impressive newcomer: True freshman OT Mason Cole stands out. He arrived early and went through spring drills. He is 6-5, 292 and will be heavier and stronger. He could be a very good one.

Top moment: Watching Brady Hoke roll up his sleeves and work with the d-linemen.

On the rise: RB De?Veon Smith. A 5-11, 220-pound sophomore, Smith is a strong runner who has carved a niche for himself. He may be hard to unseat from the No. 1 spot.

Nagging question: Is the o-line better?

Under the radar: Dennis Norfleet. The diminutive Norfleet is one of-if not the-fastest wideouts on the team. He often gets overlooked amid hub-bub about Amara Darboh, Jehu Chesson, Freddy Canteen and Devin Funchess.

Jeremy Gallon will be missed, but the pass-catchers look good. Lots of competition. Freddy Canteen looks like he has picked up where he left off in the spring. He has some speed this corps has lacked in recent seasons. Others who look good include Dennis Norfleet, Jehu Chesson and Amara Darboh. Devin Funchess is, well, Devin Funchess: good. He spent quite a bit of time working on a Jugs gun catching passes. Frosh Drake Harris is worth the hype, according to program watcher, if he avoids hamstring issues that dog him. He worked on conditioning by himself. Darboh looks to be over a 2013 foot injury.

The o-line is a work-in-progress. On this day, Mason Cole was left tackle; Erik Magnuson was left guard; Jack Miller was center; Kyle Bosch was right guard; David Dawson was right guard. But this is a fluid situation with many moving parts, options and combinations. The staff is adhering to the time honored coaching mantra of ?the best five guys will play.? By mid-camp, the coaches say they?d like to have a set front. Stay tuned. I will say that Ben Braden is an impressive specimen.

The running backs look good. Derrick Green has come a long way since last year, looking much more fit as he?s about 30 pounds lighter. But he?s running No. 3 right now. De?Veon Smith is No. 1 and looks good. Drake Johnson is right with Smith. He looks recovered from a knee injury that ruined 2013. USC transfer Ty Isaac looks the part. But he?s waiting word on a hardship transfer to be eligible now. Bottom line: Lots of options for an offense that coaches say will need multiple backs.

This should be one of the better linebacking units in the Big Ten. Lots of athletic ability. Moving Jake Ryan to the middle looks like it will pay off. He?s closer to the action and more a part of the mix. Desmond Morgan has gone from the middle to the outside. James Ross is on a flank. The guy is a physical force who can run. Ben Gedeon, Mike McCray, Joe Bolden and Royce Jenkins-Stone are others who make this group deep.

There has been lots of talk about freshman corner Jabrill Peppers. He?s getting some work and figures to be a nickel back-and perhaps more in time. He missed most of this practice attending class. The rest of the secondary looks good. Blake Countess figures to be one of the top corners in the league. He has been dinged up. Raymon Taylor, Channing Stribling and Jourdan Lewis give this group depth. Lots of competition at corner, which is good. Michigan wants these guys to be more aggressive. Jarrod Wilson is the free safety. The other? Jeremy Clark and Brandon Watson are in the mix. Delano Hill was limited to conditioning work as he recovers from a broken jaw.

Before we arrived, Devin Gardner has had a good camp. He looked sharp today. There are few better athletes at the position in the Big Ten. He was throwing the ball with some zip. The staff also likes Shane Morris, a lefty whom coaches like and won?t hesitate to play. With a sense of urgency in 2014, Michigan almost has to give the reins to Gardner. Could Hoke really entrust things to Morris?

Frank Clark is a true stud at end. He?s lightning quick and strong. He flashed those traits in one-on-one drills. Brennen Beyer moved back to end last year after starting at linebacker. Some good options on the interior. Lots of size in Willie Henry, Ondre Pipkins, Chris Wormley, Matt Godin and Maurice Hurst.