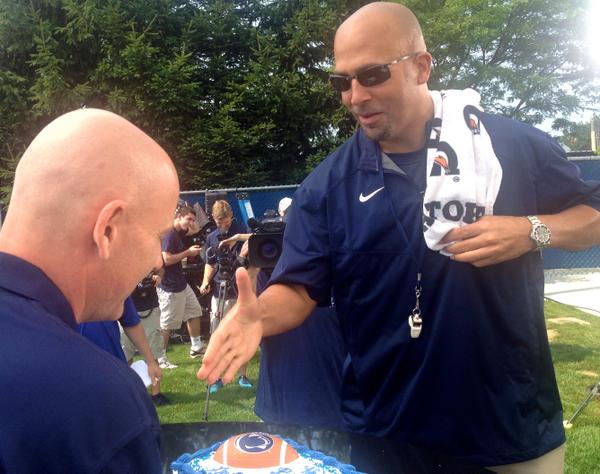 STATE COLLEGE, Pa. – There is much anticipation for the start of James Franklin?s maiden voyage at Penn State. But he faces big depth hurdles due to NCAA sanctions. And attrition could prove hazardous to the program as it continues to deal with scholarship limits.

Franklin brings a great resume to the table, winning at Vanderbilt. His defense has a chance to be decent. The offense? There is some skill talent, but line play could prove to be troublesome.

Here are my thoughts from Penn State practice.

Loudest coach: O-line coach Herb Hand. The guy oozes passion and truly loves his job. You could hear Hand chortling from across the practice field. Classic.

Impressive newcomer: Many to choose from. But I like tight end Mike Gesicki. No. 88 doesn?t look like a freshman. He just adds depth to an already deep spot. I have to think we?ll see lots of two-tight sets.

On the rise: DeAndre Thompkins is a speedy option at a wideout spot that needs some help with Allen Robinson gone. Thompkins, who went through spring drills, could be special.

Nagging question: Will the o-line come together and stay healthy?

Number: 11, seniors on the roster. Penn State has a combined 57 true and redshirt freshmen. As you can see, this is a young team.

The Nittany Lions were in shorts and helmets, so we didn?t get a full snapshot. The tempo was brisk; no wasted motion. And there was plenty of enthusiasm and energy, fueled by all of the coaches. Offensive coordinator John Donovan is one of the smartest coaches you?ll meet. Defensive coordinator Bob Shoop is a Yale grad who has worked his way up the ranks. He's a bright defensive mind who also can motivate.

Coming in, I figured the offensive line would have issues. It does. Left tackle Donovan Smith is a sure thing. He?s legit, a future pro. But the talent around him is lacking. Upbeat line coach Herb Hand is undeterred. He coaches his eyes out. But he just doesn?t have much to work with. Center Angelo Mangiro and right tackle Andrew Nelson have impressed, according to the staff. Depth is dicey, so these guys need to stay healthy.

This is an interesting team – some areas of massive strength (QB, TE, DB) and glaring issues (OL, LB depth). Sanctions huge part of that

Offensive coordinator John Donovan may have to get creative this fall. While at Vandy, this staff tried different things, including the Wildcat. The offense worked on some Wildcat in practice today. Donovan has some nice running backs to build around in Zach Zwinak, Bill Belton and Akeel Lynch. Try-hard Chip Chiappialle also will be a factor. Love that guy. But how much room will they have to run behind the line?

Christian Hackenberg looks good. The guy has a big-time arm and is advanced for his age. He looked sharp on many throws today. The staff may have to shorten his drops and have him deliver balls quickly if the line struggles. Will Hackenberg be a part of the ground game? May be risky.

The receiving corps has some promise. Geno Lewis looks good. Donovan is counting on him being the No. 1. Freshman DeAndre Thompson also showed some speed and ability for a unit that needs some playmakers. He is a 4.4 guy, maybe the fastest on the team. Matt Zanellato is solid. Newcomers figure to help in addition to Thompson: Chris Godwin and Saeed Blacknall look good. They have size and speed. No doubt, the tight ends will be a big part of this. Kyle Carter catches everything. Jesse James is one of the most impressive physical tight ends in the Big Ten. There also is Adam Breneman, Brent Wilkerson and true freshman Mike Gesicki, who is very impressive.

Watching TE's w @HowardGriffith – I said there might be 4 pros there. His response "at least."

The end duo of Deion Barnes and C.J. Olaniyan looked good. Each shows a burst off the edge; big, quick athletes. Anthony Zettel looks more comfortable after moving from end to tackle. Austin Johnson is a load on the interior. JC Tarow Barney is a beast inside; strong and built low to the ground. Franklin thinks this may be the most talented area. And he?s correct.

The defense looks good for @PennStateFball. The line has most talent, including end C.J. Olaniyan. pic.twitter.com/tCh9ZVZMGP

The linebackers will be strong. Mike Hull is healthy and has moved to the middle. He looks well suited. Nyeem Wartman is a terrific athlete. Brandon Bell also runs well. The problem? Depth. If attrition sets in, trouble could set in.

You can tell Adrian Amos is a leader. He has a presence on the field. Plus, he?s talented. He makes some big hits and he can cover. Jordan Lucas impressed at corner. Speedy ? physical ? he has to be one of the Big Ten?s best. I expect a big year. Trevor Williams pairs with Lucas to give the Nittany Lions a nice corner duo.