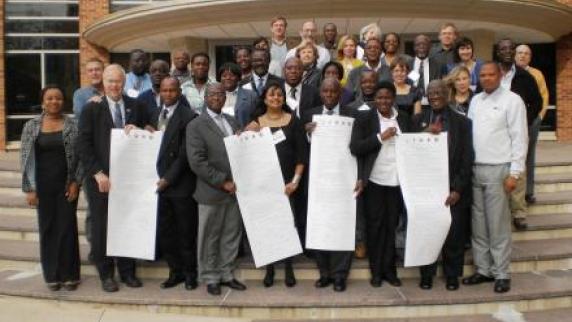 It?s no secret that many Sub-Saharan African countries face challenges in developing and delivering high-quality health care to their citizens, and some of the reasons for that are well-known. Extreme poverty. Remote and untamed geography. Destructive conflicts that often do the most harm to women and children.

What?s not as well-known is how issues such as institutional transparency and education administration can also hold back progress in this area. But researchers and educators from the University of Michigan and the nation of Ghana are leveraging a long-standing partnership to alleviate those kinds of problems and pave the way to a brighter future for Africa. The University of Michigan and key organizations in Ghana have worked together for several years now to improve health care education and services in the latter. Realizing that this relationship was too critical to risk being challenged by common obstacles that often derail international collaborations, they decided a few years ago to have upfront, candid conversations about the obstacles they?d likely face - such as distance, communication barriers and cultural differences - and develop ways to create greater transparency and cooperation as they moved toward their common goals.

Frank Anderson, M.D., associate professor in the Department of Obstetrics and Gynecology at the University of Michigan?s Medical School, credits the resulting ?Charter of Collaboration? in 2009 with fostering greater collaboration around clinical service, education and research among doctors, students and leaders at the University of Michigan and Ghana.

Through workshops with University of Michigan and Ghana officials, the charter addressed common challenges to international academic collaboration - everything from sensitive issues like authorship, data access and presentation rights to significant infrastructure and organizational differences between the U.S. and Ghana.

The charter, funded by a $3 million ?learning grant? from the Bill and Melinda Gates Foundation, ?provided an opportunity for all partners both in the U.S. and Ghana to increase communication, transparency, and building of trust,? said Anderson, who directed the creation of the charter along with Peter Donkor, a medical professor and provost of the College of Health Sciences at Ghana?s Kwame Nkrumah University of Science & Technology.

It urges all participants to not just ?get the work done? but to be more conscious of how the work is being done. That?s helped improve data-driven policy making and enhanced education for health care providers, according to an article detailing the charter in the August 2014 issue of the Academic Medicine journal.

For example, Anderson says the charter has led to a consortium of 20 African and American OB/GYN departments in 14 countries that will set out to train 1,000-plus OB/GYNS throughout Sub-Saharan Africa within the next 10 years. The idea is to not just bring in aid to underserved areas, but also to create a system for training in Ghana to make sure there is a lasting ability to serve the needs of residents there.

?[We have] a unique opportunity and history to make a major impact on this issue in Sub-Saharan Africa,? Anderson said this year during a workshop in Accra, Ghana. That event brought together OB/GYNs from academic institutions throughout the region, as well as professional support organizations and policymakers.

?Only obstetricians can train other physicians to become obstetricians and gynecologists,? he added. ?I believe that every sub-Saharan African country should have a center of excellence where obstetricians and gynecologists are trained in a sustained university-based program that provides a source of women?s health education, expertise for country-wide training of midwives, healthcare workers, practice, protocol standards, policy developments, research and advocacy.?

The Charter of Collaboration has also been credited with furthering other projects, such as the University of Michigan?s Africa STEM (science, technology, engineering and math) committee. That initiative seeks to nurture career scientists in Africa early on, advance international research collaborations in STEM disciplines and develop more partnerships to address major global problems.

Additionally, the charter has provided a framework for a partnership project in the Democratic Republic of Congo, where University of Michigan researchers aim to improve the quality of health care in curbing the ongoing use of rape as a tool of war in the DRC.

The charter serves as a living document that helps define a new standard in academic and government partnerships. Anderson hopes this model can be applied to other similar global programs.

?We now have a reference for our future projects,? he explained. ?The charter can be referred to and used as a guideline. It lessens the reliance on one particularly charismatic person to maintain a partnership, and allows others to work collaboratively because we have these common assumptions and open means of communication.?